Knoxville in World War I - The Knoxville Mercury 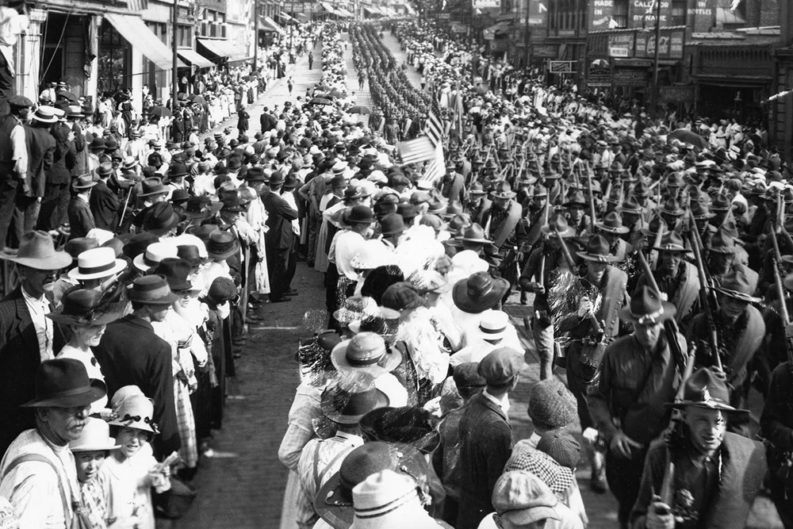 One hundred years ago, the United States entered World War I . So did Knoxville.

The United States was slow to join the World War, but when the country declared war on Germany, in April, 1917, thousands of young men, and a few older career military officers like Brig. Gen. Lawrence Davis Tyson, Col. Cary Spence, and Col. James A. Gleason, successful Knoxville businessmen before the war, saw combat in Europe. Tyson, a veteran of wars against the Apaches, 30 years earlier, would be the first to lead troops into German-occupied Belgium.

Knox County contributed about 4,000 men in uniform to fight the Germans. Most were “doughboys” serving in the U.S. Army. They paraded down Gay Street to board trains for boot camp. Several others joined the Navy or Marines.

At home, civilians did what they could to help, as women prepared bandages and other medical supplies needed on the front. The Park House on the corner of Walnut and Cumberland was a center for these home efforts.

Knoxville’s vigorous German minority had maintained an influential and often festive presence in Knoxville, but during the war, some changed their names to sound more American. Prince Street was the old street that ran from the river wharves to Market Square, but during World War I Knoxville changed it to Market Street, reputedly to sound more democratic and less German. Anti-immigrant sentiment grew, and immigrant entrepreneurs often gave their businesses patriotic-sounding names to prove their allegiance.

A year passed before a Knoxvillian died in combat. The first was Lillard Earle Ailor, a young man killed at Verdun on Apr. 8, 1918. Ailor Avenue, between Fort Sanders and Mechanicsville, is named for him.

Most of the losses were in the war’s final weeks. The worst day for Knoxville was Oct. 6, 1918, when 15 Knoxvillians died in combat.

The war’s strangest loss was that of Archie Pope of Fountain City, a Brookside Mills employee who enlisted in the Navy. He was among the 306 men lost on the U.S.S. Cyclops, in the Western Atlantic in March, 1918. The disappearance of the Cyclops remains the Navy’s biggest mystery.

J. Ernest Karnes, known as “Buck” to some of his friends, won the Congressional Medal of Honor for extraordinary bravery in subduing a German position with the help of only one other soldier near Estrees, France. The Alcoa Highway Bridge was named in his honor, but at home he lived a humble life, as a painter and policeman.

The Doughboy Statue was erected in front of Knoxville High School on Fifth Avenue in 1921 by veterans of the 117th Infantry as a memorial to “that company of shining souls who gave their youth, that the world might grow old in peace.” Many of those who died were KHS alumni.

McGhee Tyson Airport was named in honor of Lt. Charles McGhee Tyson, who was killed in a plane crash in the North Sea in the final weeks of the war. His father, Brig. Gen. Lawrence Tyson, and mother, Bettie Tyson, donated Tyson Park to the city to assure that Knoxville’s airport should always bear their son’s name.

Estimates vary, but about 140-160 soldiers from Knox County were killed in World War I.

The last Knoxvillian killed was Oscar Rider, an employee of the Ty-Sa- Man machinery factory, who was shot at the Argonne Forest one hour before the already announced Armistice signing.

Featured Photo: In 1917, thousands of recruits marched down Gay Street to board troop trains at the Southern Railway Station. They were bound for pre-combat training at Camp Sevier in South Carolina. Image courtesy of Calvin M. McClung Historical Collection • cmdc.knoxlib.org.

Please help the Knoxville History Project maintain this page and support the Knoxville Mercury for another year! See knoxvillehistoryproject.org, or send your tax-deductible donation to KHP at 516 W. Vine Ave., #8, Knoxville, TN 37902.

Corrected: Charles McGhee Tyson was a lieutenant, not a captain.