Trains, Plains, and Auto-Fields: We Need Another Marshall Plan (or a Second TVA) for Rail - The Knoxville Mercury 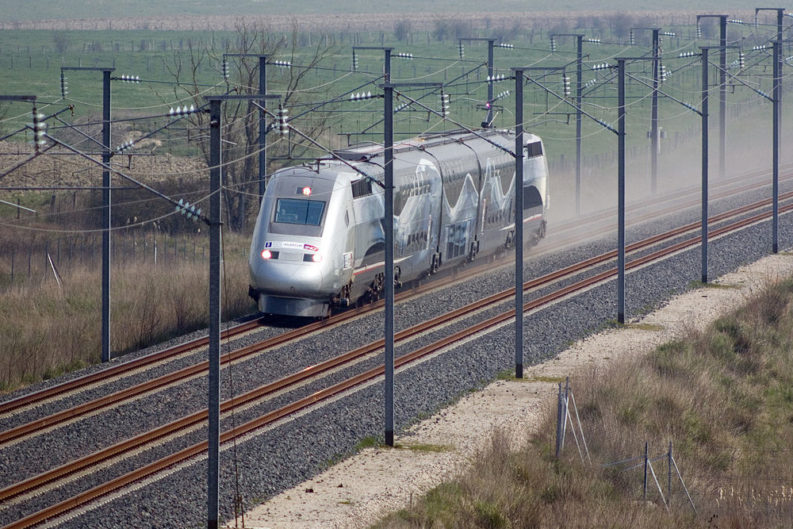 Rail service once connected Memphis and Knoxville; it still does if you happen to be freight. To understand why coal can travel by rail where we cannot, and what this has to do with our built environment, it’s important to understand a few basics.

Since the late 19th century, the L&N line—which carried passengers as well as coal—has run south from Knoxville through Chattanooga. From there, its tracks arc west across northern Alabama, and nip off Mississippi’s northeastern corner before they pop back up into Tennessee, just south of Memphis. After 1912, and for the next five decades, passengers arrived at Memphis’s Union Station. Until it was demolished in 1969, it was one of that city’s finest Beaux-Arts buildings. 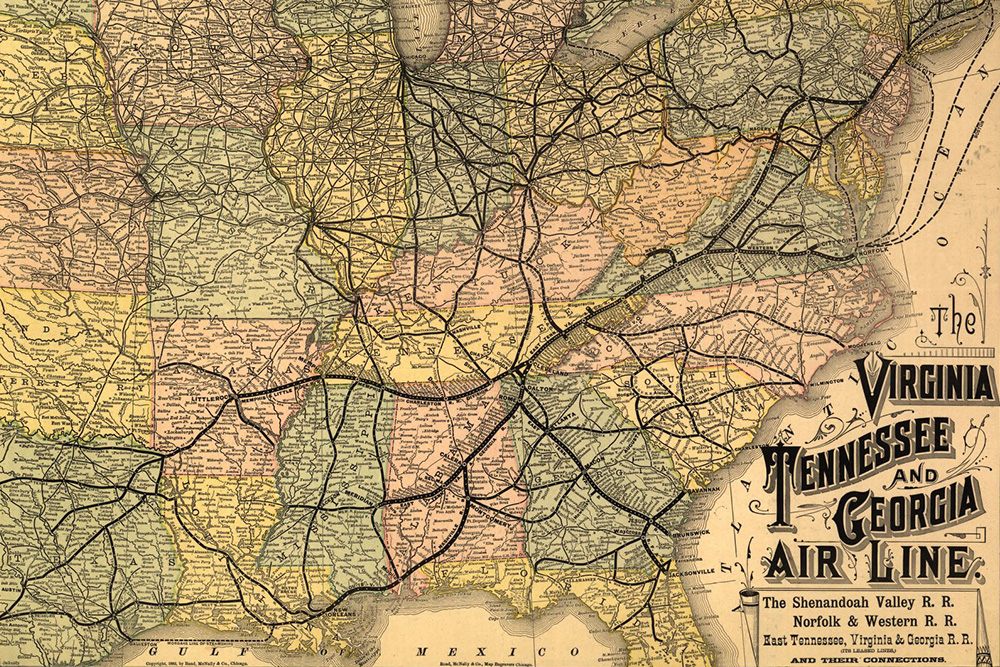 A more direct route (no longer in service) required passengers to make a connection at Nashville’s Union Station: from the Knoxville and Nashville Railroad (K&N 1884-1902) to the Memphis and Charleston line. The main purpose for the K&N track, however, was to transport coal, not people. The K&N was renamed the Central Tennessee Railroad (CTR) in 1902; it carried passengers to the state capitol until 1956.

The cessation of passenger service roughly coincided with TVA’s shift to coal-fired power generating plants, which by the beginning of this century accounted for well over two-thirds of the authority’s energy production. From the K&N’s inception, however, coal and other raw materials were its preferred fare. From the start, Tennessee’s railroad and coal industries have been recto and verso of the same page. The CTR did more than service the coal industry; several mining operations along its rail line were CTR-owned and operated.

More broadly still, for most of its history, a relatively small group of men at some remove from the state (most notably J. P. Morgan), controlled virtually all of Tennessee’s rail service. Just as the coal mines of West Virginia, beginning in the 19th century, were owned by out-of-state cartels (and largely mined by migrant labor hastily imported for rapidly expanding coal operations), the mining and railroad industries in Tennessee have been controlled by “outside interests.” 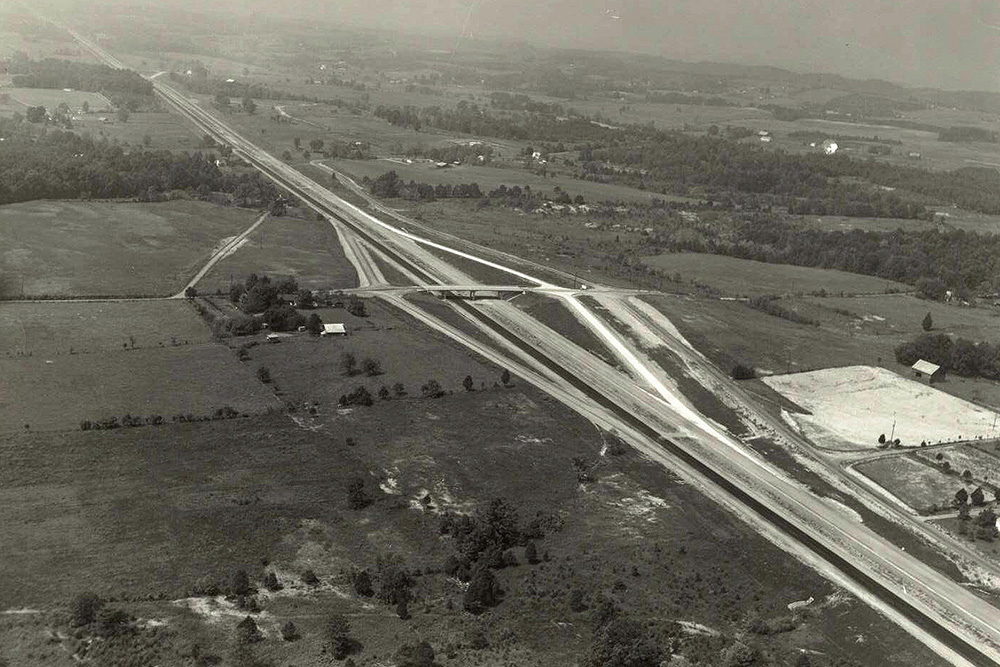 Aerial view of recently completed Interstate 40 at Lovell Road (circa 1960).

That said, those interests served the state well, at least until 1920, when rail service reached its high-water mark of 4,078 miles of track. That year was critical for other reasons: The federal government lifted its national control of the rail industry (following World War I); L&N Southern reported its first loss since Reconstruction; and rail service began a steady decline, interrupted only by a significant uptick during World War II. By 1995, rail travel had contracted to the point that passenger service was virtually extinct (save for Amtrak service through Memphis) and total rail mileage shrank to pre-1890 levels (approximately 2,600 miles).

Tennessee will never get back to its 1920 level; going backwards is not the point. What matters is who and where is served, and more critically, how. Yes, the state has a bucket full of bridges and roads requiring urgent and sustained attention; the federal and state departments of transportation ought to direct funds at those projects as well. The number of decrepit dams in all 50 states is staggering. But Tennessee’s Department of Commerce won’t attract the kind of progressive businesses the state needs with interstate billboards crowing: “Bridges gusseted, dams shored up, guns concealed but loaded.”

Anyone who’s traveled to a major city in Asia or Europe knows our country’s infrastructure is an embarrassment; you would think we were on the losing end of the last century’s World Wars. And while there are political and economic reasons for this beyond short-sighted fiscal conservatism, we have made do for so long, it has become so normative as to escape notice. Several generations of Americans have come of age barely taking note that the last superpower, with over 300 million inhabitants, has little rail service beyond two major coastal operations, that our airports resemble bus stations, and our bus stations look a lot like under-funded homeless shelters (Knoxville notwithstanding).

During the next 1,400 days, however—presuming the 45th president beats the odds and completes his first term absent impeachment, indictment, or self-immolation, and presuming that his pledge of $1 trillion infrastructure spending is more than an “air quote” promise—there is an open door where many see ahead only a dark passage.

Senate Democrats were the first through the door. Before the inauguration in January, they detailed a plan that earmarks $180 billion for new rail construction and upgrades. True, it doesn’t bode well that Senate majority leader Mitch McConnell (R, Kentucky) slammed the door shut, presciently rejecting the plan a month before the Democrats even released it.

There is more at stake, however, than passing up an open door and leaving cash on the table. Recent developments in the railroad industry in this region signal great prospects for Chattanooga, Nashville, and Memphis, but a potentially dim future for East Tennessee and Knoxville, absent bright-eyed vision. Here are a few reasons:

• The U.S. High Speed Rail Association, a not-for-profit private advocacy group, has a phased proposal to construct or upgrade, by 2030, 17,000 thousand miles of Very High Speed (VHS) service (180-200 mph) throughout the 48 contiguous states, particularly where it is most needed and least present. To date the proposal extends east, as far as Nashville (through Memphis).

• Meanwhile, widely reported last year, Georgia’s Department of Transportation is zeroing in on one of three potential routes for a new VHS rail line that links Atlanta and Chattanooga (travel time 88 minutes).

• Both developments bode well for Tennessee, overall, but apparently leave Knoxville and its environs largely on the cutting edge of the past for the foreseeable future. 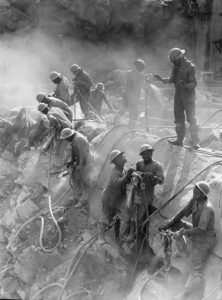 If this region is to keep apace with these trends, it needs something approaching the support that the Midwestern farming community has enjoyed since the New Deal. We need a domestic Marshall Plan; we need another TVA. Not the TVA of the last century that uprooted generations of families as it inundated homesteads and entire towns with several million metric tons of water, but that aspect of the TVA that revitalized a depressed region and set the stage for this state’s place in “The American Century.” We need a TVA for 2017 and beyond.

Three-hundred and eighty three miles separate the downtowns of Memphis and Knoxville. The projected cost of the Atlanta-Chattanooga VHS line is $8.76 billion, covering 128 miles, or $68.4 million/mile. Presuming the same cost per/mile of track, connecting Gay Street and Beale Street (non-stop in two hours) would carry a price tag of upwards of $26 billion. Admittedly, this seems the sort of sum one associates with the reconstruction of New York’s Ground Zero. And yes, “A billion here, a billion there; pretty soon you are talking real money.” Yet, with $1 trillion in federal funds earmarked for infrastructure, state bonds, and working with not-for-profits such as the U.S. High Speed Rail Association, these sorts of things are possible. Moreover, most of the abandoned CTR and Memphis & Charleston rail lines are extant. If they can be upgraded, the cost per mile could drop from $68 million to $4 million per mile, lowering the total cost by more than 90 percent.

Just as most of the Atlanta/Chattanooga VHS rail line will be constructed along the Interstate 75 corridor, the stretch of I-40 between Memphis and Knoxville seems the perfect substrate: the right-of-way is clear and available; all grading and blasting through topographical impediments complete. Construction would be largely on grade (the least expensive type) situated between the east/west roadbeds.

With a 21st-century infrastructure networked to most of the country, Tennessee would be in a position to attract progressive businesses that stay (permanent dollars) and businesses for those that don’t (tourism). Progressive and innovative businesses help raise the number of quality workplaces and the quality of life. Innovative businesses propel the state toward an influx of intellectual and creative capital—not secreted within a walled compound weaponizing nature’s elements for the Department of Energy (read Defense), but dispersed throughout the state.

VHS train service could change Tennessee’s economic and political landscape on the same scale that the TVA changed its physical landscape. Why couldn’t the Holston River Valley and Tennessee Valley be home to another Silicon Valley? Remember that unlikely scene on the West Porch of the Capitol Building at noon, Jan. 20, 2017. For better or worse, we are in the age when seemingly anything is possible.

Forget I-40. Build an infrastructure for 21st-century train travel that moves fourfold faster than vehicular traffic, connecting Tennessee’s western plains with the Cumberland Plateau and the mountains to the east. Forget your grandfather’s highways and imagine a vast field of cars, not idling at rush hour nor parked at a mall, but decorating a strange landscape garden. A kind of ruin—an auto-field folly to a form of transportation that has outlived its value, because it takes far more than it gives. It is a monument to the American Dream—a dream that, in this century and the next, will require of us a new kind of dreaming. These are the sorts of dreams one has when propelled 200 mph, a few centimeters above the earth.

Now it’s a mighty long way down the dusty trail
And the sun burns hot on the cold steel rails
‘n I look like a bum ‘n I crawl like a snail
All the way from Memphis
—Mott the Hoople, “All the Way from Memphis” (1972)