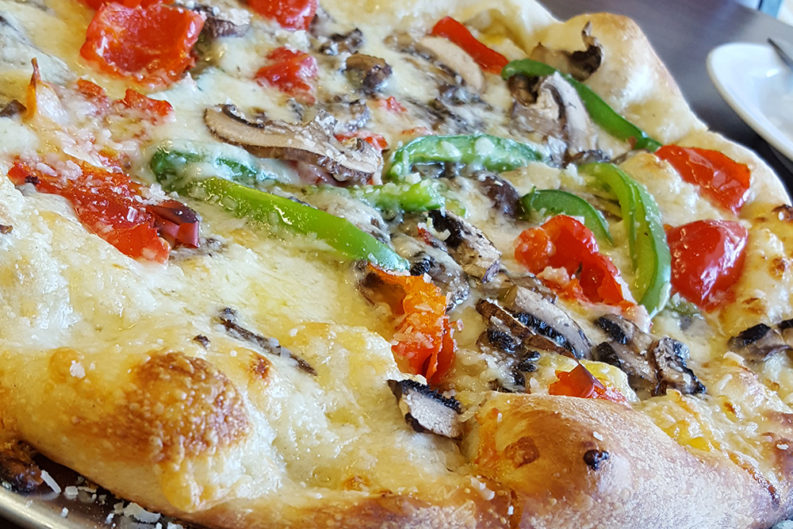 The opening of Pizzeria Nora was bittersweet for some folks who were regular visitors to the flat stretch of North Central Street that’s just down the slope from the north side of the Oak Hill neighborhood. That’s because the pizzeria emerged from the ashes of what was one of Knoxville’s brightest sandwich beacons: the North Corner Sandwich Shop, which was created by the very amiable David Blevins, who’s also the proprietor of Nora. Like many fans of Blevins’ now fabled Italian subs and grilled “Cheesesters,” I wondered if the new enterprise would rise like a Phoenix or peter out into a wisp of red-sauce-scented smoke.

Since my own vision of the Phoenix is informed by Harry Potter’s valiant healer, Fawkes, the extended analogy is unfair. Still, though Pizzeria Nora may not prove an effective antidote to basilisk venom or a foil to the wiles of the Dark Lord, it is certainly a light in the darkness that is the frontier of Downtown North’s still-wild edges.

The biggest change—well, aside from the demise of those excellent sandwiches (I promise, I’m not bitter)—is that the hours have shifted from day to night. Pizzeria Nora opens at 5:30 p.m. and closes four hours later on Tuesdays through Saturdays. The space looks the same: sparse, clean, and dominated by a big blue fish hanging on the back wall. Blevins has added some little red candle holders to the bare tables, but décor is not much of a consideration. Even with the candlelight, it’s not the spot for a night of romance—unless, of course, you’re dating someone with a pizza fetish, in which case it may prove a real thrill.

About those pizzas: The crust is “Kind of neo-Neapolitan,” Blevins says, “or New York style, which is just a hand-pulled, thin crust pie. I use a high-protein flour like they do in New York so the crust has some chew. I wanted to do a pizza where people could actually eat the crust.” 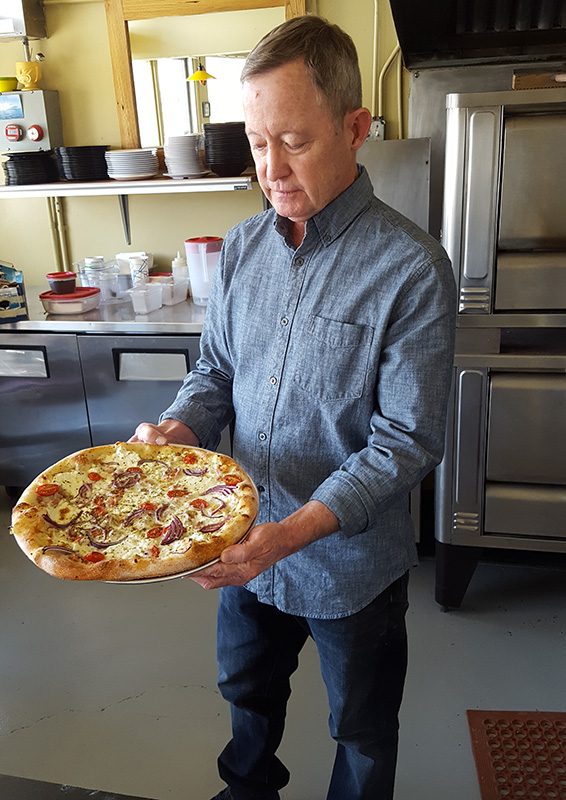 Dough geeks will enjoy hearing the details from the source’s mouth (and Blevins likes to talk about his dough—the flour kind, that is), but suffice here to say that Blevins manages a truly toothsome result that does in fact have good chew punctuated by excellent crackle thanks to some air pockets. If you ask nicely, you might get a little bit of Blevins’ olive oil to use as a dip for the crust. But you won’t need it for the bulk of the pie.

Blevins offers just a handful of selections, and that’s a good thing for this lovely little nook—a small space with well-made, but limited, offerings always sounds like a hit to me. There are five 12-inch pizzas on offer, one salad, and one dessert. Pizza options and toppings are few, so don’t come looking for anchovies or regular old black olives, and you won’t be able to add bacon, chicken, or artichoke hearts.

And you can’t get the same old, mundane soda that you may expect. The soda fountain is gone, but there are Blue Sky and Hansen’s sodas, San Pellegrino juice beverages, and pitchers of ice water, too. For $3 you can BYOB, and Blevins has some stemless wine glasses available for you to use.

So if you want a brand-name-heavy experience with endless choices and combos and substitutions, Pizzeria Nora probably ain’t your thing. If you like the idea of one guy, making good pie his way, then drive over that hill, park on the street, and chow down.

My favorite of the pizza lot is the Gino, a straightforward red pie with garlic, oregano, and Pecorino Romano that’s made verdant with a field of cracked Sicilian green olives. At this writing it is a serious salt fest, but Blevins is reworking the pie. My doctor would say that’s a good thing, and while I don’t necessarily enjoy the salt parch, the pizza’s generous landscape of cheese and olives is an essential part of its allure. Piquant and meaty, the olives set off the mild red sauce and pair beautifully with the bite of some red pepper.

The Nora Special makes for fascinating eating owing to the mix of textures and flavors that give the pie a decadent richness balanced by refreshing flashes of bright acidity. Ricotta and goat cheese form the base of the pie and provide a creamy and tangy foundation; happily, the goat cheese melds pleasantly with ricotta without being an overwhelming flavor bully. The pizza is dotted with little nuggets of pancetta that are perfectly sized for both a pop of meaty flavor and a pleasant moment of crisp chew in the midst of the rich base. Halves of cherry tomato not only make the Nora Special special to the eyes, these little punches of moisture and freshness also add a lot appeal to the palate. 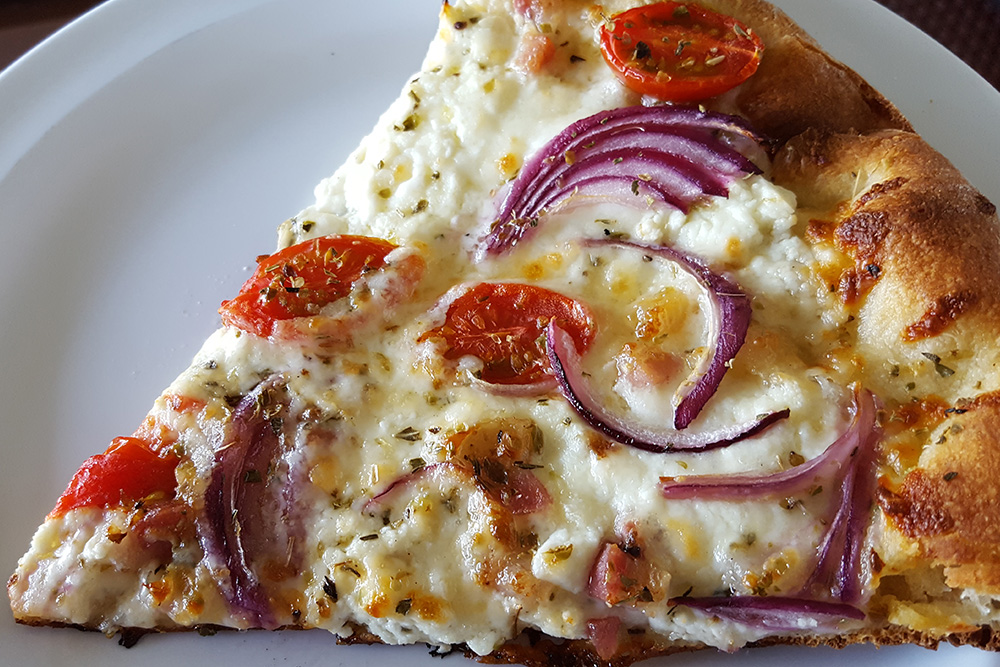 But flavor wise, it’s the Foongee that dominates my memory. Ever since I turned against my once-beloved cream of mushroom soup, I’ve been wary of the proximity of fungus and creamy things—in this case, Fontina cheese. But this pie takes a major left turn with its inclusion of Peppadew peppers, and their presence—which, honestly, struck me as just plain bizarre—made the Foongee a cordial bite. The signature piquant sweetness of these peppers gives the pie just the right lift to make the cremini and Fontina work while contributing textural interest, too. I shouldn’t have been surprised—my friends John and Ginny always serve Peppadews stuffed with a savory cream cheese concoction as a nibble that almost always spoils my appetite before Christmas dinners.

I didn’t try the salad, which is a mix of greens with feta, Kalamata, and orange supremes under a raspberry vinaigrette. But I did have dessert: buttermilk panna cotta with Fabbri cherries and salty pistachios. Admittedly, it’s a simple offering, but I have to constantly remind myself never to underestimate simplicity.

Fabbri cherries are fleshy, dark, tart-sweet Italian beauties from Emilia-Romagna that are candied in a syrup made from the same kind of cherry, the Amarena. They pack a flavorful wallop that’s perfect for Blevins’ delicate and delicious panna cotta. And as far as pistachios go, I’m a big fan, so I think they go with everything; but here they do, in fact, complete the full flavor profile of the dessert as elements salty, sweet, and sour cohabitate merrily with things crunchy, meaty, and silky. I don’t mind telling you that I ate two.

For the record, the location of the shop apparently causes some trepidation for a handful of eaters—that stretch of Central north of Happy Holler is still developing. Even so, there’s nothing to fear, except, perhaps, over-eating. But if you’re that worried, call ahead and take it to go. The pizza may even be better after a reheat in a hot home oven.

Pizzeria Nora joins a whole slate of excellent pie providers in our city, which has become, surprisingly, a pizza paradise. I’m not sure where this place ranks in the scheme of things, but the pie, like the place’s vibe, is good.