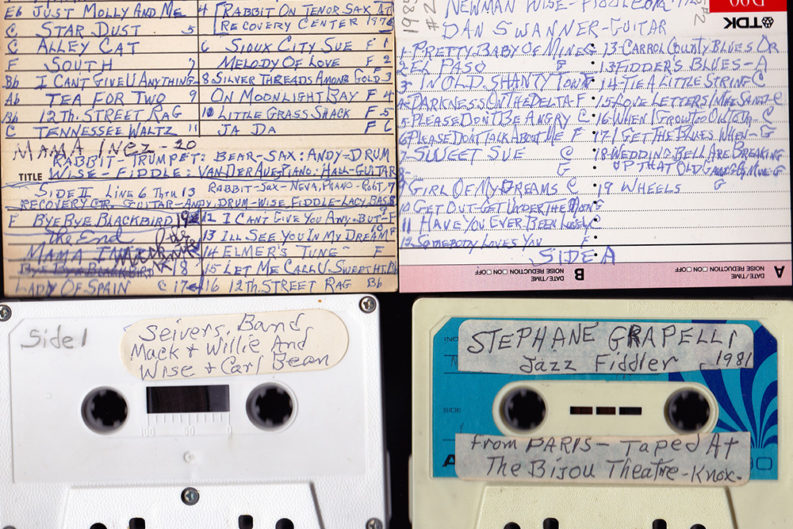 About a year ago, a few weeks before the Knoxville Stomp festival, I wrote about Newman Wise, a local fiddler who recorded two 78 rpm sides with the Wise String Orchestra during the 1929 recording sessions at the St. James Hotel. His daughter, Sonia Clift, gave us four cassette tapes that Newman recorded of himself playing with other old-time musicians in the 1970s and ’80s. We were excited to hear them, as they were among the most recent recordings by any of the musicians from those sessions, along with recordings from Howard “Louie Bluie” Armstrong and Mack and Willie Sievers, of the Tennessee Ramblers.

We visited Sonia again a few months back, and the timing was fortuitous. She had been cleaning out her mother’s house and came across four cases of cassettes, containing around 100 more tapes her father recorded.

Newman was fastidious about documenting the home jam sessions he participated in with his friends. Most of the tapes list the people involved, with more than a dozen string players appearing in the 15 years covered by the tapes. Occasionally a drummer and horn players would sit in, including trumpet player David “Rabbit” Edmonds, who played with the Dorsey Brothers in the 1930s and led a small jazz orchestra in the 1940s.

Accompanying many of the tapes, scribbled on bank deposit slips and other scraps of paper, are lists of the songs, sometimes with the key, songwriter, or source of the song noted. These guys knew a lot of songs, and rarely do they seem to have been chosen in advance. Most often you hear one of the pickers call out a number, and everyone picks up on it almost immediately. There are repeat performances (“Rubber Doll” and “Puff the Magic Dragon” were among the favorites), but hundreds of different songs appear.

The tapes weren’t of the highest quality—Kmart, Certron, Ampex, Memex, and other companies familiar to those who bought blank cassettes in the late ’70s and early ’80s—so some of them are faded and warbly. But many retain surprising fidelity.

The earliest tape—aside from a 1954 session, probably dubbed from reel-to-reel tape—is dated August 1974 and features “Maw” Wise on piano. Rollicking ragtime tunes are mixed with hymns, and there’s a lengthy stretch of the family just sitting around talking. The most recent tape is labeled, in noticeably shakier handwriting, “at My House Jan, 1992 Newman and Dan Swanner.” At the end of the tape, after running through “Wedding Bells are Breaking Up That Old Gang of Mine,” Newman comments on his performance.

“I haven’t played in a while, but I feel good enough to play, so I guess I ain’t dead yet,” he says.

This would be an outstanding collection of old-time East Tennessee music anyway, but two tapes of Newman playing with Carl Bean and Newman’s fellow St. James sessions artists Mack and Willie Sievers make it especially valuable. Newman’s daughter says she remembers Willie, who would visit and play with her father. One of the tapes, probably recorded in the early to mid ’80s, had Bean emceeing, as if the group was playing to a crowd. He introduces Wise as “the finest fiddle player in Knoxville.” They have a fun time running through old-time and country songs and even a few Hawaiian tunes from Mack and Willie’s days as the Novelty Hawaiians.

The most surprising discovery, however, might be a cassette labeled “Stephane Grapelli [sic] 1981, Jazz Fiddler from Paris – Taped at The Bijou Theatre Knox.” Known as the grandfather of jazz violinists, Stéphane Grappelli is most famous for playing in the Quintette du Hot Club de France with jazz guitar great Django Reinhardt. In 1975, a friend of Wise’s made him a 90-minute mixtape of Reinhardt and Grappelli recordings, with a spoken introduction saying how much he thinks Wise will like them. It’s not surprising that Newman and his peers would have admired the French violinist. Though much of their repertoire was old-time Appalachian or pop songs, Wise and his East Tennessee colleagues were conversant with a large number of jazz songs.

By the 1970s, Grappelli was performing with mandolinist David Grisman, incorporating American traditions into his own playing. The Bijou show was taped from the audience, most likely on a small, inexpensive recorder, but the sound is pretty good for a 36-year-old Ampex tape.

An advanced notice of Grappelli’s performance appeared in the News Sentinel. Directly below the brief article is a mention of a music and dance contest at Carl Bean’s Music Barn on Oct. 10, the day before Grappelli’s concert. We haven’t uncovered a tape from that date, but it isn’t difficult to image Newman Wise might have played his own show there before heading out to see the Frenchman. Maybe he even played a Grappelli tune he picked up from his mixtape.