A 6-Year-Old Transgender Girl in Knoxville Writes a Letter to the U.S. District Court of Appeals - The Knoxville Mercury 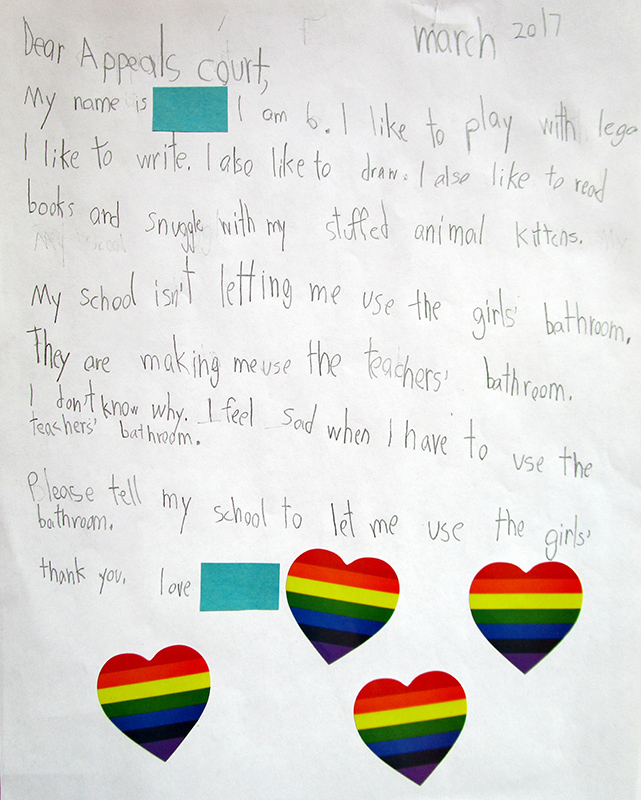 Thousands of transgender-rights advocates across the nation have pledged to support Gavin Grimm, the transgender Gloucester, Va. student who sued his high school for barring him from the restroom used by boys at school.

A girl from Knoxville is also “Standing With Gavin,” even writing an open letter to the U.S. Court of Appeals for the 4th District asking it to rule for Grimm. But the suit may mean even more to her than to Grimm, because while he will graduate high school long before any precedent is set in the case, she is just 6, a public school student with 11 years ahead of her.

And like Grimm, she is transgender. Her mother, “Ann,” who spoke anonymously to protect her child’s identity, says the girl has already experienced discrimination at school, which the mother also did not name.

Knox County Schools does not have an explicit policy regarding transgender students’ use of school restrooms, according to KCS director of public affairs Carly Harrington.

“The common practice of Knox County Schools is to follow state and federal law and to consider such instances on a case-by-case basis,” she says. “Appropriate accommodations are made that are reasonable to those who may be affected, including but not limited to, the use of gender-neutral restrooms. Principals administer the accommodations.”

In Tennessee, recent bills HB888 and SB771 have attempted to establish a law requiring “students in public schools and public institutions of higher education to use restrooms and locker rooms that are assigned to persons of the same sex as that shown on the students’ birth certificates.” And while SB771 failed in the Senate Education Committee on March 22, HB888 is still in progress in the House, with co-sponsors numbering 20 at last count.

The young girl and her mother have been watching videos about Grimm and the national case for some time. “I want her to know someone is fighting for her, for all trans kids, and I want her to have positive trans role models,” she says.

The child first decided to share her own experience with the U.S. Supreme Court, which was originally supposed to hear Grimm’s case March 28. When the Supreme Court kicked the case back down to the U.S. Court of Appeals for the 4th Circuit, the girl and her mother addressed the lower court instead. A family friend close to Grimm’s case had advised Ann that an open letter was the way to go; the letter later came to the attention of GLSEN, a LGBTQ students advocacy group that published a scan on its website and Facebook page.

The Supreme Court’s punt of Grimm’s case was “in light of” President Trump’s departments of Education and Justice deciding Feb. 22 not to enforce May 2016 guidelines set forth in a joint statement from those same departments in the Obama administration. Those LGBTQ-friendly guidelines established a baseline for including transgender students in the interpretation of the Title IX law to “attend school in an environment free from discrimination based on sex.” The Trump administration did not replace the guidelines, only omitted them.

But these ins and outs are lost on the 6-year-old transgender girl who loves Legos, drawing, and snuggling with her stuffed animals, says her mom.

“She does not understand why the school is doing this to her. She hasn’t done anything wrong, yet she’s being punished,” Ann says. “She doesn’t have a full understanding of all the legal stuff, but she does know that Gavin is fighting for her. He personally shared her letter on his Facebook page, and that made her feel really excited. She looks up to him. I look up to him! I don’t know how his case will turn out, but I do know he’s changing the world for the better.”

Ann says that her daughter’s transition was not a surprise to her in any way. The child was “gender creative from a pretty young age,” Ann says, “and I could see that she was struggling with her assigned gender even before she had the words to tell me.

“Once she did have the words, I listened. We’ve figured it out together. She used to have a lot of anxiety, but after she transitioned, all that disappeared. She’s living as her true self, she’s happy, she’s well-adjusted. The only problem and source of anxiety right now is the school.”

Even when the Obama-era education guidelines were firmly in place, clearly stating that transgender kids should be treated in accordance with their gender identities, Ann maintains that school officials told her that her daughter must use either the restroom that corresponds with the sex marker on her birth certificate or a single-stall staff restroom.

“My daughter’s sex assigned at birth is only one very small part of who she is, but to her principal, this is the only part of her that matters,” she says.

The family navigated the process of acquiring accurate identification documents, something that was only possible because Ann’s daughter was born in a state that allowed amendments to sex markers on birth certificates, not Tennessee, which prohibits such changes. Still, Ann says, little changed at the school.

“She has a birth certificate, a passport, and Social Security records all with a sex marker of female,” notes Ann, “But the school says she must still use either the boys’ restroom or the staff restroom.

“This is problematic for her emotional well-being, as well as her physical safety. Every time she needs to use the restroom at school, she’s reminded that her school doesn’t accept her. For months, she was scared to use the restroom at school out of fear of being hurt by another student or punished by a teacher. She was convinced there were cameras in and near the restroom so that the principal could spy on her. I had to go to the school to personally check the restroom for cameras multiple times in order to put her mind at ease. No child should have anxiety about something as simple as using the restroom.”

Activists are watching the timeline of Grimm’s case closely, pondering whether it or another landmark transgender student rights case will make its way to the Supreme Court only after the current vacancy is filled by President Trump.

In the Tennessee Legislature, yet more bills target LGBTQ rights, including:

• SB0030/HB0033: As introduced, it would “require the words ‘husband,’ ‘wife,’ ‘mother,’ and ‘father’ be given their natural and ordinary meaning, without forced or subtle construction that would limit or extend the meaning of the language and that are based on the biological distinctions between men and women.”

• SB0127/HB0054: Known as the “Business License to Discriminate” by the Tennessee Equality Project, this bill would prohibit “state and local governments from taking discriminatory action against a business based on that business’s ‘internal policies.’”

• SB0752/HB0892: As introduced, “enacts the ‘Tennessee Natural Marriage Defense Act,’ which states the policy of Tennessee to defend natural marriage between one man and one woman regardless of any court decision to the contrary.”

• SB1085/HB1111: This requires that undefined words be given their “natural and ordinary meaning, without forced or subtle construction that would limit or extend the meaning of the language, except when a contrary intention is clearly manifest.”

As federal and state legislation drags out, transgender students will feel the stress. Right after the Trump administration altered the guidelines on how Title IX should be read, Joshua Block, the American Civil Liberties Union lawyer representing Grimm, wrote a letter to the Supreme Court. “Delaying resolution of that question will only lead to further harm, confusion, and protracted litigation for transgender students and school districts across the country,” Block wrote.

Locally, the recently established Trans Empowerment group is trying to keep transgender issues in the limelight.

Trans Empowerment president Jack Knoxville, himself transgender, says that while solid national and state legislation would make things better for transgender students, an even bigger challenge is simply awareness.

“We need to provide adequate education about the trans community to the public,” he says. “We have decades of misinformation working against us, as well as religious and cultural bias to overcome.”

“I see and hear a lot about how ‘God doesn’t make mistakes’ and every life is valuable,” he says. “But then when children don’t feel comfortable in their skin, they are told that their thoughts and feelings are not valid and suddenly their rights don’t matter. I, personally, would love to see society stop focusing on things like gender as a means to create inequality. In all honesty, gender shouldn’t be a factor for disqualification in the human race.”

This type of turmoil, the report concluded, led to findings that LGBTQ students who experienced high levels of anti-LGBTQ victimization were twice as likely to report they do not plan to pursue post-secondary education and had lower GPAs, lower self-esteem and higher levels of depression than their cisgender peers.

Doing without public education for her transgender daughter will never be a solution for her family, Ann notes.

“I’m not certain who came up with this analogy, but I agree that ‘It wasn’t about drinking fountains then, and it’s not about bathrooms now,’” Ann says. “This whole restroom issue has nothing to do with restrooms and everything to do with trans people’s right to exist in public spaces.

Or, as her child sums it up: “I belong in the girls’ bathroom because I’m a girl. I’m transgender and there’s nothing wrong with that.”