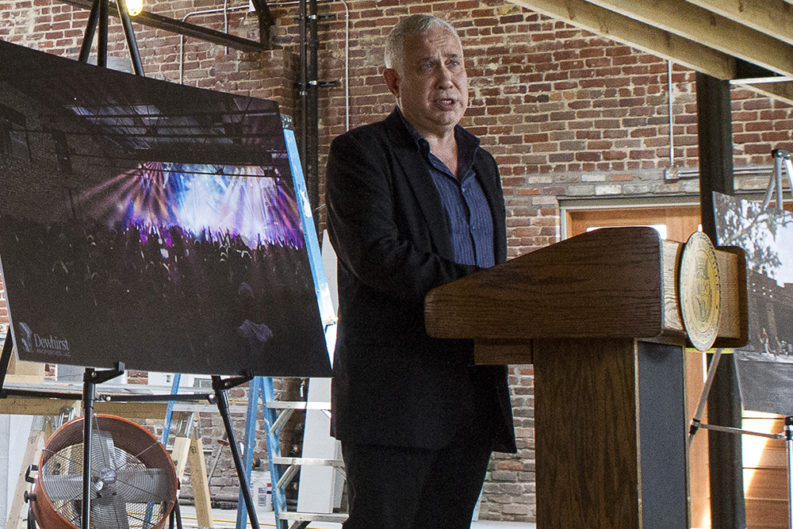 Big Ears founder and organizer Ashley Capps talks about this year’s festival, which ended on Sunday, the events that surprised him, and plans for next year.

Well, that’s another Big Ears. How do you feel?
I feel tired, but I feel great. The way the fans and the artists alike embraced the entire experience of the weekend is so energizing and so affirmative to me personally, about this little idea that I had. I’m blown away by it.

It’s very exciting to me to see the idea continue to develop, to see these amazing audiences for these extraordinary artists. In a way, I think it captures the spirit and the energy that Bonnaroo also has, where the artists and the audience some together for a shared experience and they really inspire one another to create this one unforgettable experience after another.

Were there any surprises for you this year—performances that exceeded your expectations or did something different than you thought you were going to see?
The most pleasant surprise for me was the Mill and Mine. Obviously I love that venue, but we made the decision to create concerts in the round. It was inspired by Lisa Moore, the pianist, because we were talking about different ways of presenting her concerts—she came up with the idea of doing a show in the round. And then I thought, well, what about at the Mill and Mine? But I didn’t know how it would work.

It blew me away. I think it was a sublime experience to see Frederic Rzewski, to see Lisa, to see the Knoxville Symphony Orchestra, seeing people gathered around the musicians. And the sound was sublime, too, I thought. The symphony yesterday sounded amazing out on the floor of the venue.

Besides the Mill and Mine, the churches—I was thrilled with the experience of hearing the music that was presented in those churches, and I think the audiences were, too. St. John’s Cathedral ended up being an extraordinary listening experience, for people like Wu Fei and Sir Richard Bishop, Lisa Moore, Matthew Shipp, and then the Gavin Bryars Ensemble performing there was sublime.

Church Street United Methodist Church equally so—a grander experience, even, just because of the architecture of the building. For me, all four of the concerts at the church were unforgettable, which is exactly what I hoped they would be. I had been trying to be very thoughtful about what I put where, and in all instances, what I put in those venues exceeded my expectations. I loved, too, being able to have purely acoustic performances in some of those spaces.

You seem to have gotten a handle on some of the capacity issues and long lines from last year.
It seems to have worked out. We had more venues this year, so we were able to divide the audiences, hopefully in a way that made sense and that didn’t cause too many painful conflicts. But that’s the name of the game. It’s one of the interesting challenges of the festival.

But having multiple choices, having different things going on simultaneously, creates a certain amount of energy around the festival. For me, that’s an important part of the festival experience. And yet at the same time, you have music that is demanding your full attention and concentration, so there’s a little bit of a tug of war there sometimes. On a personal level, I wasn’t able to see everything. But I made my choices and I went with them. There are some artists I was able to see from beginning to end, and that moment of being able to focus on something was all the more powerful because of what it was in the midst of.

You have to accept that you can’t see everything, and you can’t second-guess your decisions.
Of course. Let’s face it—there are a handful of really great restaurants out there that have only one meal. It’s an amazing chef, and you go to that restaurant because of that meal and you’re going to eat whatever th chef has decided to cook.

But that’s very rare, and it’s also very limiting. A lot of people are picky about what they eat, so they’re not willing to subject themselves to that kind of mystery. So most restaurants, most great restaurants, offer a choice—appetizers, entrees, side dishes. You can’t eat it all. You’ve got to decide whether you’re having the lamb tonight or the pasta dish, and hopefully you’re not sitting there eating the fish and wishing you had gotten the pork. You live with that decision and enjoy it.

The festival felt pretty big this year. How much bigger can it comfortably get?
It felt like a really big idea coming to fruition, and that was really exciting for me personally. One of the most exciting things about it is that so many of the ideas are coming from artists, from fans, and from other people in the community. You’ve got the library organizing the reading of Suttree. The Knoxville Jazz Orchestra was involved. R.B. Morris organized his Bermuda Triangle of the Appalachians.

The symphony program wasn’t my idea. It was completely Aram Demirjian’s idea, and I think it worked beautifully.

Andy Bliss is just a fountain of ideas. And what the Knoxville Museum of Art had going on—the Jered Sprecher exhibit and the video exhibition, both of which dovetailed really nicely into the festival’s aesthetic. It’s tapping into and engaging the community.

As far as whether it can get bigger or not, I don’t know. Getting bigger isn’t the objective, by any means. If it grew this year, it didn’t grow because we wanted to do a bigger festival. It grew because we had this incredible array of opportunities and were just like, how can we make it happen?

Every now and then I think about going outdoors with part of it. I’m not really sure. But I don’t want to force it. This year the festival kind of told us what it wanted to be.

Have you looked at the attendance figures?
With guests and everything, it was over 15,000—my guess is probably over the course of the weekend there were 16,000-17,000 people. That’s a big jump over last year, but not a huge jump on a per-day basis. It’s just that we did a fourth full day, and people loved that.

I thought people were going to get burned out on it. But I heard from several people last night that everybody they knew who had decided to leave early on Sunday regretted it.

You announced the dates for next year—March 22-25—at the end of this year’s festival. Will you announce more news soon?
I originally thought I was going to make some announcements and put next year’s festival on sale during the festival weekend this year, but ultimately things got really busy, as you might imagine, and it felt like trying to fit a square peg into a round hole. So we announced the dates but haven’t moved forward. There’s no reason we won’t have things locked down pretty soon, but there’s no reason to let the cat out of the bag yet.