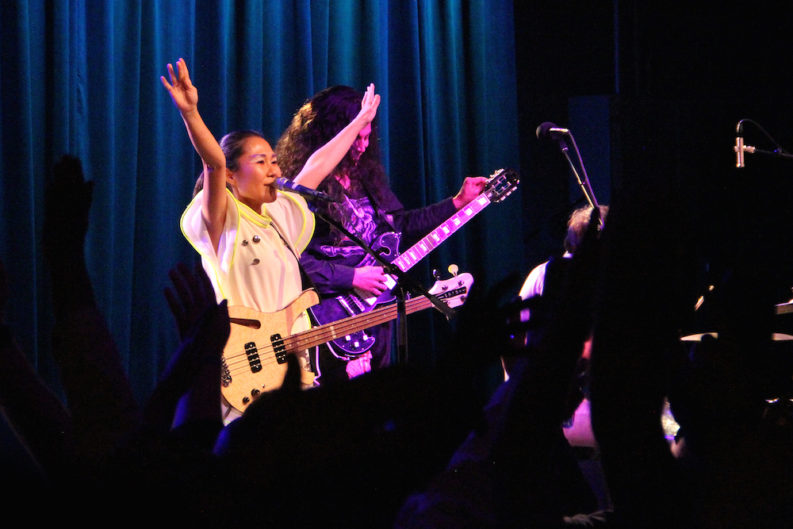 Catching up on sleep meant missing Jem Cohen and Fugazi’s Instrument, but luckily not the Q&A following the screening, where my KM colleague Eric Dawson did a fabulous job moderating a talk with Cohen and Guy Picciotto. For a band I’ve read so much about over the years, it was really neat to unlock that much more perspective, even in answering the slightly cringeworthy but inevitable question about their hiatus.

The Suttree’s beer exchange was a total madhouse, but a tasty one. Then to the Tennessee for Xiu Xiu’s bracing Twin Peaks set; what a treat to hear music I’ve so completely internalized over the years (with all its dread and mystery, textual and besides) performed by a group known for its emotional violence.

I wasn’t sure what to expect from Hans-Joachim Rodelius, knowing his work mostly from the mid-’70s Cluster/Neu! “supergroup” Harmonia. The sound collage and ambient stuff was cool (and a lovely thing to hear inside St John’s Episcopal Cathedral) but honestly the highlight was a pretty solo piano piece played at about the set’s halfway point. Overall a much-needed reminder to give sets like this time to really work before moving on.

Jonathan Demme’s Something Wild was great, then skipped Colin Stetson in favor of hauling ass to Horse Lords. A good call: The Baltimore band’s raging set was probably my favorite of the weekend, full of stunning rhythmic constructions I was helpless against. And after that, another highlight, in the form of Magnetic Fields’ very considered stage show centering around Stephen Merritt’s new 50-song autobiographical record. They played the first 25 songs, which cover the first 25 years of Merritt’s life, and I can’t imagine a better setting to take in this piece of work: Merritt’s melodies are consistently catchy enough to connect with the audience on first listen, his wit draws gasps and chuckles from the audience, and his dispassionate inter-song narration is a hoot contrasted with the elaborate stage show.

Then the wind-down: past Gay Street/Wall Avenue for Gravity Hill Sound + Vision, which was a sight to behold; to Mill and Mine to witness Kaitlyn Aurelia Smith conjure unfathomable electronic sounds for voice and knob-twiddling (another unexpected highlight); and then, finally, to Deerhoof, which was pushed back to 12:30 a.m. and suffered a little for it re audience energy levels. The band was also a little sloppier than I remember, sure, but by that point in the evening, so was I.

BIG PLANS SUNDAY: Magnetic Fields! Rangda! Sinking of the Titanic! But mostly the free, BYOB local music festival Big Asses, happening all day at the Birdhouse and getting particularly heated up around 6 p.m.

CONUNDRUMS: Will I somehow manage to still be awake/lucid enough to finish my weekend at the Titanic screening?