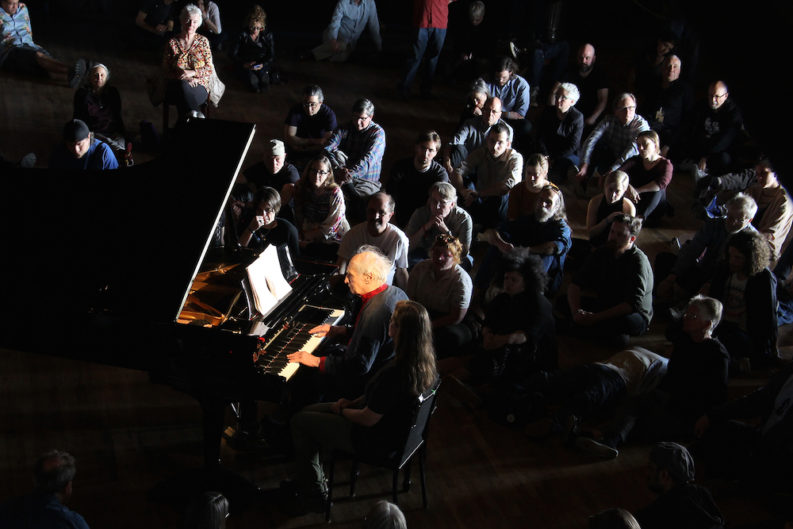 Matmos’ interpretation of three parts of Robert Ashley’s Private Lives lived up to high expectations. Ashley’s opera is such a bizarre, singular work, any attempt to perform it has to be a challenge, and Matmos met it admirably.

The duo’s best decision was probably preparing different arrangements, and even costume changes, for each of the three sections. With MC Schmidt handling the recitation and Drew Daniel providing electronics, they were accompanied by the droney minimalism of strings, flute, and backup singers for “The Park” and rollicking boogie-woogie piano and singers for “The Bar.” “The Backyard” hewed closest to Ashley’s original recording, just the Matmos duo alone, with Schmidt adding acoustic guitar flourishes.

These pieces are text-heavy, and you’ll never absorb all of Ashley’s philosophical musings and fractured narrative, which makes it a rewarding work to return to. Heads were definitely swimming after the nearly two-hour performance, especially those encountering this work for the first time. A highlight of the fest so far.

In Jonathan Demme’s film Swimming to Cambodia, a screening of which was the first official event of the festival, Spalding Gray talked about trying to have “a perfect moment” when visiting exotic places. I live in Knoxville, but every year Big Ears makes it feel like an exotic locale. I wasn’t looking for a perfect moment, but it occurred to me I might have been having one midway or so through Frederic Rzewski’s solo piano performance of “The People United Will Never Be Defeated.”

After an introduction by Ashley Capps, during which Rzewski talked about some flight difficulties and his desire to have some whiskey while in the South, the 79-year old composer played his 1975 composition. A Steinway was situated in the middle of the Mill and Mine floor, and maybe 150-200 people sat in a circle around it and listened for 75 minutes as Rzewski delivered an amazingly dexterous performance.

I was seated behind him and could see the sheet music. I don’t read music, but I could sort of follow along because of how frequently the music changes, clusters of notes followed by minimal playing. (There are a lot of notes in this piece.) At times during Big Ears, one can’t help but become self-conscious about how what is occurring is a once-in-a-lifetime special event. Midway though, as the sun shone in the venue and I looked around at a group of listeners seated uncomfortably but concentrating intently on—and enjoying—this music, I felt that.

Rzewski received what so far was the longest, most sustained round of applause I’ve witnessed this year, everyone on their feet acknowledging not just the performance but the composition and his career as well. Hopefully Rzewski had a perfect moment, too.

I saw and heard much more on Friday, but I’ve run out of time and have to get day three started.