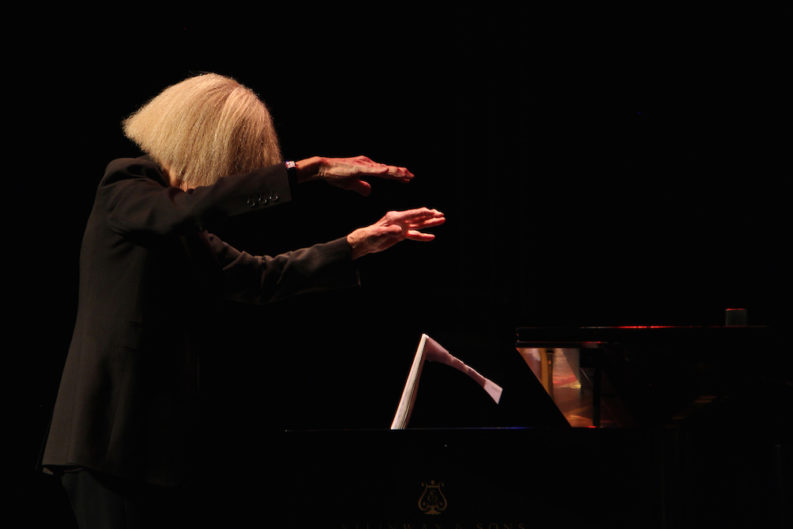 Never imagined a Big Ears would kick off with a 35mm screening of Jonathan Demme/Spalding Gray’s Swimming to Cambodia, but there we were in the Tennessee Theatre at 2 p.m., watching it—a great example of the unpredictable programming Public Cinema has brought to the spirit of the festival. The film is an overlooked gem, and apparently one of Public Cinema cofounder Paul Harrill’s favorites.

Carla Bley with the Knoxville Jazz Orchestra was every bit as fun and awe-inspiring as a lot of us hoped. Bley’s compositions aren’t exactly avant-garde or left-field, but they are thorny and multilayered enough to stand out from most big-band material. They go down easy for listeners, but I’m sure they offered a bit of a challenge to the band, who handled the arrangements superbly. Andy Sheppard did some heavy lifting on extended saxophone solos, and Steve Swallow sat in on guitar. Just great.

Matana Roberts did without the ensembles that accompanied her on her first two COIN COIN records and performed the solo COIN COIN Chapter Three: River Run Thee, though she incorporated text and images from the first two parts. It was quite a contrast to Bley, Roberts relying on electronics, vocals, and sampled loops as much as playing sax.

Matthew Shipp and Bobby Kapp’s performance was an example of a whole other school of jazz, as the duo played more than an hour of improv. Shipp often gets compared to Cecil Taylor, but tonight he wasn’t nearly that far out or free, returning to specific rhythms and clusters and referencing more standard jazz piano in between. Kapp kept things kind of mellow, never bashing away or running his whole kit as must be tempting to drummers improvising for an hour-plus. I admit that at times I wondered how much the two were actually listening to and responding to one another, but it really didn’t matter. There was enough going on to engage for the duration.

My surprise of the first day was DakhaBrakha. They look great on paper, but brief encounters with performances on YouTube left me indifferent. In person, however, the Ukranian quartet were utterly unique and fantastic. I didn’t expect the percussion to be so loud and prominent, or for an ostensible folk band to seemingly borrow from techno rhythms. The vocals were the high point, though, Vladyslav Troitskyi’s high parts especially. That encore is my new favorite song. (Sorry, I haven’t had time to look it up yet.)