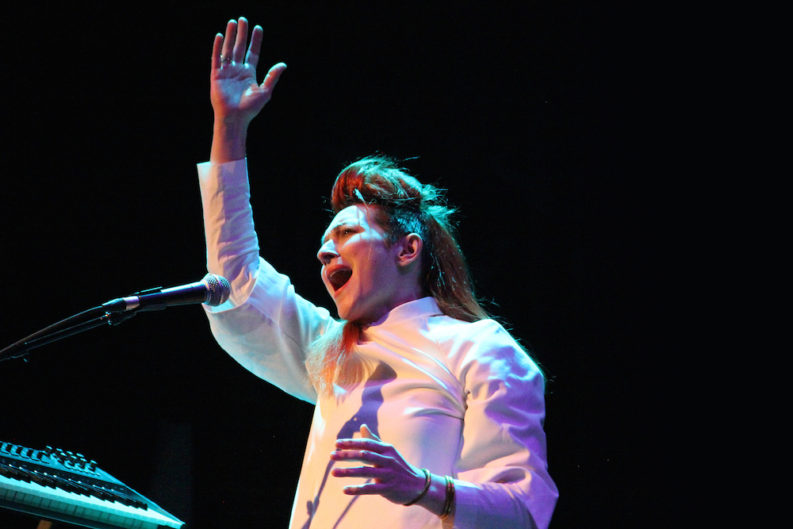 Day one of Big Ears is down. And, as usual, I found myself feeling overwhelmed while taking it all in. The mix of new faces and wide-eyed curiosity that saturates downtown never fails to make me morph into a giddy tourist. From nodding along to folks marveling at the sheer amount of venues within walking distance (true) to overhearing an attendee point out all of the area’s awesome typography and signage (also true), the early part of my afternoon was spent people watching and inserting myself into random conversations.

I kicked things off by slipping into the launch party at the Mill and Mine just as Mayor Madeline Rogero was wrapping up her opening remarks. After pointing out to the room that “Big Ears is only once a year, but Knoxville’s here all the time,” she delivered a Captain Beefheart reference-laden intro of Ashley Capps, who welcomed a string of local performers: Black Atticus, a 16-year-old singer/songwriter from the Joy of Music School, a percussion group from the Community School of the Arts, and experimental percussion ensemble Neif-Norf.

I was already feeling sentimental, but when I caught a glimpse of the young musicians from the Joy of Music School and Community School of the Arts excitedly racing back up to the front of the crowd to catch their fellow performers, it took me over the edge.

I grabbed a quick dinner and drinks before heading back to the Mill and Mine for the Dave Harrington Group. I’m a big fan of Darkside, Harrington’s now-defunct project with Nicolas Jaar, so I was curious to check out Harrington’s departure from Darkside’s moody electronic meanderings to more full-bodied—and notably brighter—jazz compositions. As people trickled into the venue, the group took their time building to chaotic guitar runs and saxophone-led climaxes. The measured pace matched the vibe of the balcony crowd, many of who sat down and closed their eyes throughout the show.

Next it was onto the Bijou for composer Sarah Kirkland Snider’s Unremembered, with My Brightest Diamond’s Sara Nova, DM Stith, and Padma Newsome. The piece was easy to drift into and I felt lighter a few minutes into the performance. The mix of Snider’s haunting score with Nova’s vocals and projected art seamlessly drifted from sweet to spooky to somber. I only meant to stay for a part of the performance, but ended up watching the entire thing.

Down at the Standard, Michael Hurley was having a blast. The folk legend skipped from song to song, clearly feeding off of the captivated crowd—cracking the occasional joke and pausing to grin at playful lyrics. Hurley’s warm energy spread past his performance. After his set, a friend bought a record or two and asked if he’d come out to sign it. He not only came out, but he also stuck around to take photos and joke with fans.

I closed the night by heading back to the Mill and Mine for Blonde Redhead’s performance of Misery Is a Butterfly with ACME. Not surprisingly, it was packed. Also not surprisingly, they sounded great, transforming the space into a moody, fluttering wash of synths and, thanks to ACME, strings. Weirdly, frontwoman Kazu Makino seemed agitated by sound issues. I didn’t notice anything being off, but I was also closer to the front of the room, where things bled together. Regardless, it was nice to end the night feeling like I was back in my college radio DJ booth.