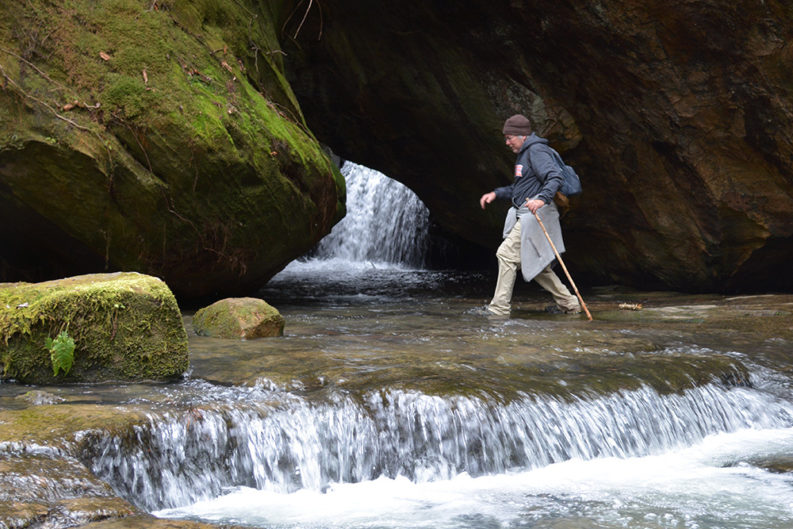 When Maryville College colleague Drew Crain invited me on a trip that he said was on his bucket list, I hoped for something extraordinary, a destination with challenges and adventure that would be memorable but also survivable. His choice—the Honey Creek Loop—did not let us down.

Our cursory research revealed much cautionary advice about this trail in Big South Fork National River and Recreation Area. Though it is only 5.5 miles long, hikers are advised to plan for at least five hours. People get lost on this trail, particularly if they start too late and end up there after dark. It is slippery and rugged, plus there are many creek crossings, so it’s advised not to go immediately after a rain. Did the deluge of two nights earlier, we wondered, count as “immediately”?

Adjectives like “strenuous” and “extreme” kept surfacing in descriptions of Honey Creek Loop.

On the drive there, with snow in the forecast, the theme from Gilligan’s Island played in my head, with the words, “a five-hour hike,” in place of Gilligan’s ominous “three-hour tour.”

Any trail that starts at an unpaved road scores points at the outset, and the fact that Honey Creek was a loop added extra credit, ranking it above out-and-back hikes that can be a letdown on the return. 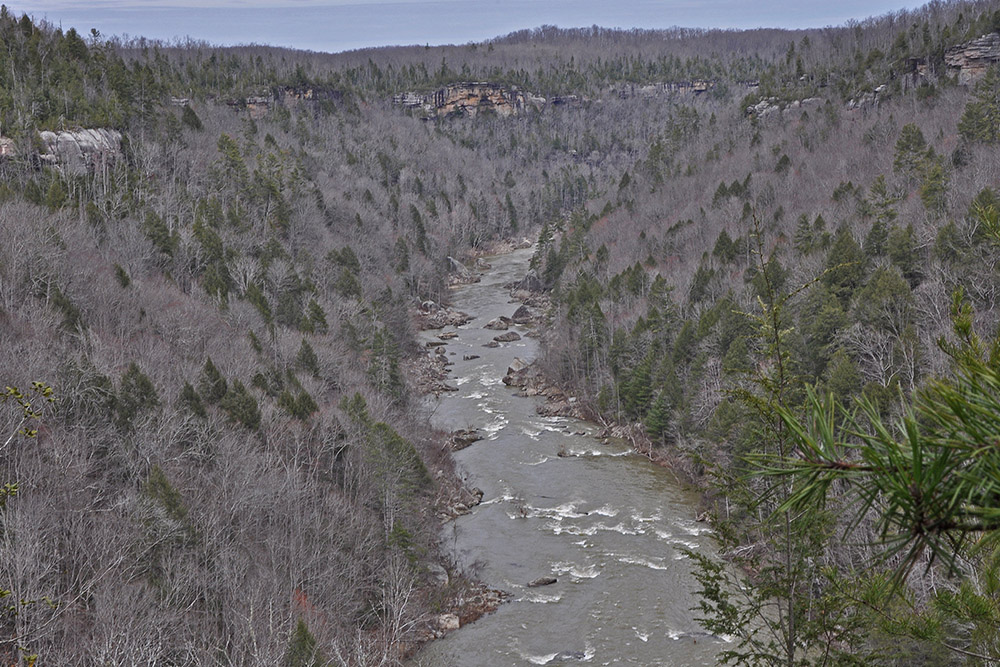 The first mile sloped downhill next to a ditch-sized creek rushing with cold clear water. At a mile and a half or so, we got to the knee-busting terrain, rocky inclines and descents and narrow slots that required some contortion. Twice, we had to rappel down steep slick rock of 15 feet or so on knotted ropes that had been there for who knows how long.

After an hour of uphill scrambles and Mayan temple-like stairways, we both shed a layer of clothing, and the temperature was still in the 30s.

As the trail dipped down to a few hundred yards above the Big South Fork of the Cumberland, we paused next to Echo Rock and listened to the river’s voice sent back to us as a low roar. Soon we were on a path that closely followed the edge of the creek, and we had to take our time to look for the small trail signs (green hiker icon), the orange arrows painted on rocks, and the green blazes on trees.

We’d been able to rock-hop back and forth across the creek with relative ease up until a section of trail that disappeared into a wide section of rushing water clogged with a complex spillage of boulders. I’d been “letting” Drew take the lead for the most part because he’s faster than me, but here he let me go ahead and be the problem solver. We could see the green hiker icon about 50 yards away on the other side of the creek, but the path there was problematic.

I climbed on top of a boulder, and after pausing in existential dread for a minute, jumped 4 feet or so over an abyss (15 feet to the cold, cold rushing water below) and then had to climb up the roots of a tree to make it to relatively level dry ground. Drew took an easier, more practical path that didn’t take as long and excluded the hurdle. 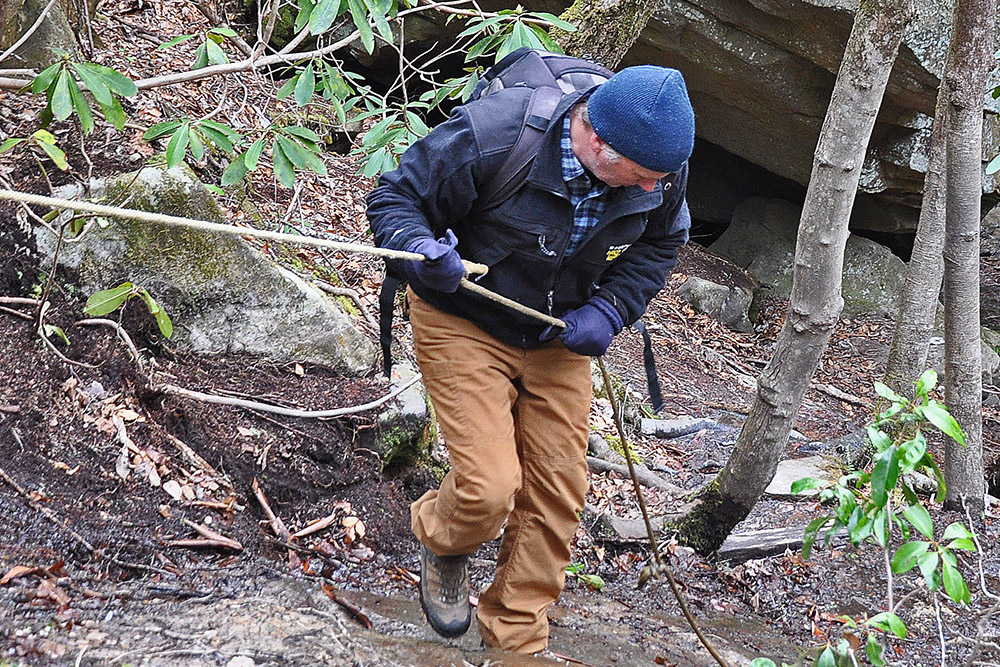 At what we judged to be about the halfway point, we began to wonder where the overlook was. And then the trail signs began to change. Instead of the green hikers we began to see the Sheltowee Trace turtle icon and the bearded profile of John Muir, indicating his namesake trail. To complicate things, it began to spit snow. We saw a couple of hikers, but they were at the top of a bluff that we had no access to. How did they get there?

We both had the same dreadful thought that we might have somehow circled back to the same terrain we’d passed, going the wrong way on the loop. Where was the damn overlook?

After a bit, the green hiker signs reappeared. (Honey Creek Loop overlaps with Sheltowee and John Muir for a stretch.) We passed more rock houses and spaceship-sized boulders and waterfall after waterfall, some tall and thin, others shorter and more powerful, crashing through narrow passages.

Back at the trailhead were a couple of hikers from Indiana who had camped next to the Big South Fork the previous night. They had also missed the overlook and the ladders that lead up to it. So we felt better about missing the turnoff but a little guilty about driving from the trailhead to the overlook, a short walk from the road. By road or by trail, the commanding view of the gorge and the river are well worth a stop.

This is my new favorite hike. We descended through geologic time from the upland forest to the giant rock walls with the overhangs and narrow passages, on down to the surging river flashing white narrows downstream. And then going back up, we returned to present time, the land of roads and gentler slopes. Having to solve the puzzles of the creek crossings and keeping track of the elusive, sometimes vanishing trail made Honey Creek all the more interesting. It took us about four hours.

The park recommends going counterclockwise on the loop, probably because the two rappelling sections would be uphill if you went clockwise.

The drive was two hours from Maryville, probably a half hour less from Knoxville. Aside from the interesting complexity and spectacular scenery of Honey Creek Loop, there’s the added benefit of a full-body workout, arms and legs and back.

To get there, take I-75 north and exit at Highway 63. Go through Huntsville and take a left on Highway 27. After you cross the New River, turn right on Mountain View Road and follow the brown park signs to Burnt Mill Bridge. The trailhead is about 3 miles from the bridge. To take the counterclockwise route, go across the road from the parking lot and up the short flight of stairs.