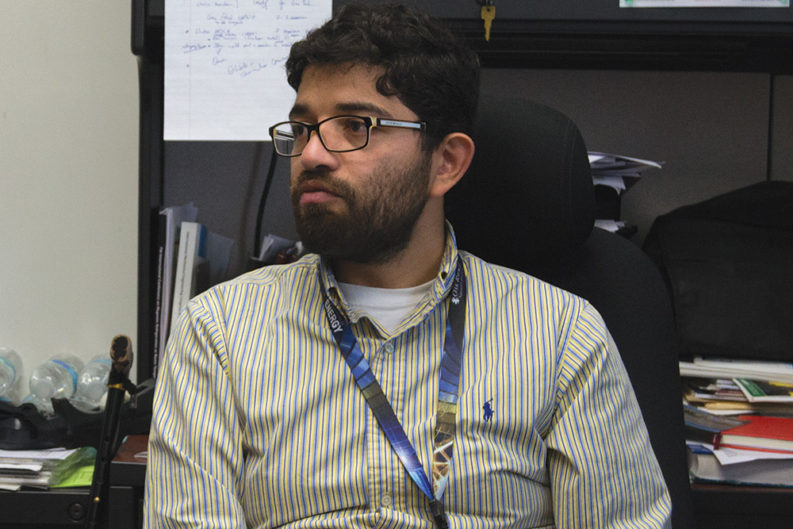 Omar Abdelaziz, a native of Egypt and student of Cairo University—he earned his doctorate at the University of Maryland—is developing alternative refrigerants that emit far less pollution than traditional counterparts. Refrigerants and coolants—on both a residential and commercial scale—contribute about 30 percent of the greenhouse gases, including carbon dioxide, linked to global climate change, says Abdelaziz, group leader of Building Equipment Research in the Energy and Transportation Science Division of ORNL. Some refrigerants have 4,000 times the global-warming emissions than carbon dioxide, he says.

But refrigerants have become gradually less harmful over time, he says, and in that he finds hope.

Here are some excerpts from our interview with Abdelaziz:

And that conclusion is based on?
That conclusion is based on science. Basically, you can monitor the concentration of carbon dioxide and other pollutants that has a global warming impact and run that through simulations and you can in fact see their impact. Over the next century, if we continue over the same path, we are going to get 4 degrees (centigrade) [warmer]. That’s about 8.5 Fahrenheit. That’s a lot.

What are the possible consequences of that?
Potential consequences, again, these are simulations, not concrete examples: Earth as we know it will change. First of all, islands and coastal cities that have low altitudes will disappear, because the sea level will rise. Rainfall will change. We will have areas of water scarcity, areas with water abundance, and probably there will be a human migration shift, so there will socioeconomic impacts. And that would have an impact on how people do agriculture, because maybe the area that has rainfall is not an arable area. What will happen there? No one knows.

Are we seeing any of these consequences yet? In terms of migration shifts, the Syria conflict, is any of that climate-related?
I cannot comment on that. But we are doing active research in Alaska in Fairbanks on cold-climate heat pumps. And it was completely surprising for us to see that the heat pump would need to run in defrost mode. Defrost means the coil collects water and that’s almost impossible in a cold environment. But apparently there is a lot of rainfall that increases humidity, and as such the coils are collecting frost. You can see the impact happening now.

What other work here at ORNL revolves around climate change?
We have a complete institute, the Climate Change Science Institute led by Jack Fellows. It has the best and brightest scientists from the lab doing research on either long-term simulation or doing active monitoring on how species will grow at different temperatures. (For instance) They put greenhouses in various places and simulate global warming and how that affects species.

What would you say to everyday people who are concerned about climate change?
There are people who are actively working to help solve and mitigate these issues. They lay wake at night because they need to find solutions. I think everyone can make his or her own contribution; reading about what is happening; understand if you use a plastic cup vs. your own cup. Understanding your carbon footprint is important. That is valuable.

What is the carbon footprint?
How much you contribute toward carbon dioxide emissions while you are performing your daily activities. So when you buy your next refrigerator, are you buying it because it is nice and shiny, or are you buying it because it’s nice and shiny and maybe more energy efficient? Think about that. It’s an appliance that will stay in your kitchen 10 or 15 years.

Describe the type of work you do.
As a scientist, the work I am most excited about is looking at energy efficiency for building equipment, and that ranges from the next generation of air-conditioning appliances, next generation of refrigerators, water heaters, but also looking at how to run those in ways that does not harm the environment.

We have recently done significant effort in evaluating alternative refrigerants that have lower impact, that are what we call lower-global warming refrigerant. I have also worked on alternative technologies altogether. These include magnetocaloric technologies, where we remove the refrigerant and replace it with magnetic materials that completely changed the way we think about cooling and heating; I also looked at alternative means using membranes and using electrochemical processes.

What do you hope to accomplish through your research, personally and professionally?
Personally, to find solutions that would result in an environment where my kids would not have to worry about what refrigerant is being emitted from the store next door. That is a personal desire. Professionally I want to make sure that hopefully within my career time I can find solutions that are mid-term deployable; where you can find drops in refrigerants … rather than being 4,000 times as bad as carbon dioxide, maybe 1,000 times as bad, or 500 times as bad.

Is this alternative refrigerant available on the market?
Some are on the market right now and we have proven their viability for commercial refrigeration. We have success stories that have shown you can put them in supermarkets and get lower global warming potential and also better efficiency.

What should people look for if they want a less environmentally harmful refrigerator?
Make sure there is always a yellow card that says what the annual energy consumption is, and when you look do not disregard that card. People usually go for the size and features and disregard what is the annual energy consumption. Now there are new refrigerators with lower global warming potential refrigerants, so try and look into that.