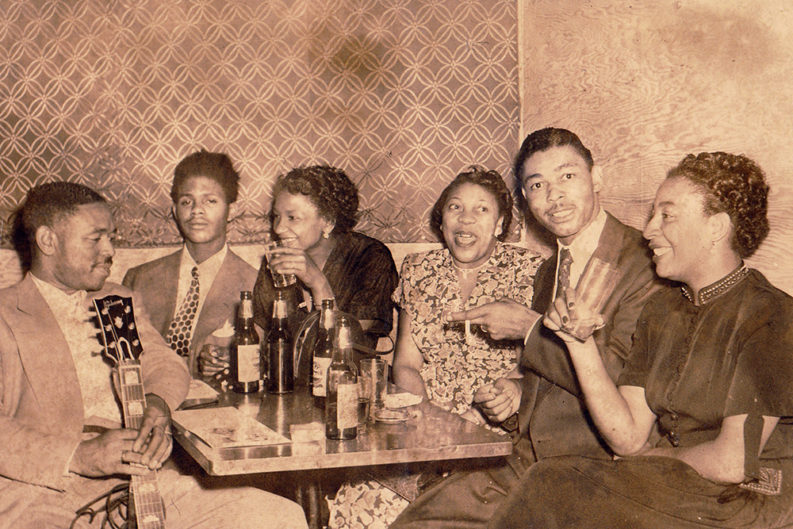 Granville Henley McGhee was born in Knoxville on March 24, 1918 (some sources say 1917, but available government records favor the later date). His older brother, Brownie McGhee, who became a famous blues singer and guitarist, was unable to walk well due to polio, and rode around in a wagon. Granville got the nickname “Stick” for the fact that he was known to push Brownie’s wagon with a stick. (Sometimes he’s called “Sticks.”)

The brothers’ father moved frequently for work, and they spent parts of their childhood in Maryville and Kingsport. However, Stick McGhee returned to Knoxville as a young man, probably in the late 1930s. He lived in a rooming house on Henley Street, near where Cheseapeake’s is today, while he worked for a tire company. He later got a perhaps better job as a waiter at the popular Manhattan Cafe, at Central and Jackson. He might recognize it today as Boyd’s Jig and Reel.

He got married here in 1940, to a woman named Amanda Barker. He and his wife settled at 318 Patterson Street, a street on the east side of downtown that no longer exists. Here he had a chance to see several of the great black musicians of the era. In the early 1940s, jazz and R&B artists Cab Calloway, Count Basie, Fats Waller, and the Ink Spots performed for black audiences at downtown dance clubs, a short walk from the McGhees’ home.

McGhee was drafted into the army during World War II, and served in the Signal Corps. He and his fellow soldiers worked up a humorous chant to pass the time. After the war, he cleaned up the lyrics a little and put it to music with his guitar. He called it “Drinkin’ Wine, Spo-Dee-O-Dee.” Stick recorded two versions of it. One version, for the Harlem label in 1947, did not make a big impact.

He liked the song, though, and kept working on it. In 1949, he recorded a harder-driving, uptempo version with electric guitar.

The term “rock ’n’ roll” did not yet exist, and it was considered a “ jump blues” record in 1949. Although there are several claimants for the title, some scholars have proposed that McGhee’s “Drinkin’ Wine” was the first rock ’n’ roll recording.

McGhee’s “Drinkin’ Wine” was the first big hit for Atlantic Records. A younger white performer, piano player Jerry Lee Lewis, was just a teenager when he star ted doing his own versions of McGhee’s song. Lewis later recorded it for Sun Records in Memphis, and it became one of his signature numbers.

Meanwhile, Stick’s older brother, Brownie McGhee (1915-1996), who played guitar on the “Drinkin’ Wine” session, became better known as a bluesman, often with his longtime partner, harmonica player Sonny Terry. He worked for years as a guitarist for folksinger Woody Guthrie. Occasionally he was even an actor. He and Terry performed at the 1982 World’s Fair.

Much of Stick McGhee’s life is less well known. He had just one more hit, the instrumental “Tennessee Waltz Blues.” It’s assumed that he spent most of his later life in the New York area, and he remarried. A cigarette smoker, he died in 1961, at the age of 43, reportedly of lung cancer. He was buried in Long Island. However, at the time of his death, his widow, Lillie Frances McGhee, lived at 911 East Vine, along what’s now the eastern part of Summit Hill Drive.

Featured Photo: Granville “Stick” McGhee, at right, sharing a fun evening with his brother, Walter “Brownie” McGhee, at left, with guitar, probably around 1950. In this photo found in Knoxville by TAMIS, the location and other people are unidentified, but notes on the back suggest it was Stick and his wife Frances’ anniversary.