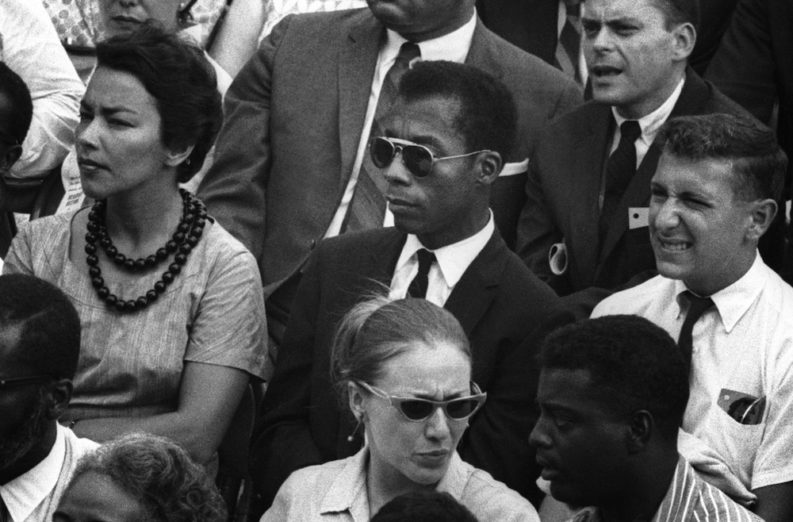 It’s generally safe to assume that the films I endorse are films I enjoy. But once in a while, pleasure and purpose diverge, and I feel compelled to recommend a movie that I’m a little less than fond of. Such is the case with I Am Not Your Negro, the new Oscar-nominated documentary from Haitian filmmaker Raoul Peck, which grounds itself in the words of writer James Baldwin, specifically his unfinished manuscript Remember This House.

Perhaps best known for his novel Go Tell It on the Mountain and the essay collections Notes of a Native Son and The Fire Next Time, Baldwin stands as one of the greatest writers our country has produced. His voice is ever resonant on America’s racial history, which, as he would put it, is America’s history.

Early on in I Am Not Your Negro, Peck proposes a loose structure to organize the 30 pages of unfinished notes for Remember This Time that Baldwin left behind. Though Peck provides a few details about Baldwin’s earlier years, what he aims for is not biographical; I Am Not Your Negro is less about James Baldwin’s life than it is about how he saw American life, and what those perceptions might reveal about our own time. The films seems as if it intends to explore Baldwin’s relationship with three of America’s most significant civil rights leaders: Medgar Evers, Malcolm X, and Martin Luther King Jr. We hear Baldwin’s initial memories of their lives and deaths, but this structure is quickly abandoned in favor of something much more disjointed.

As the documentary moves away from that initial framework, it strings together a web of impressions and opinions that Baldwin dealt with in his lifetime, from ruminations on the civil rights movements to early childhood memories of a Joan Crawford movie. The voice delivering Baldwin’s words shifts throughout the film. At times, it belongs to Samuel L. Jackson, who reads notes and letters, but in other moments, it is Baldwin’s own voice, by way of archival footage. It is in these clips of fervent debates on the couch of The Dick Cavett Show or in the halls of college campuses that I Am Not Your Negro truly finds a voice of its own. One might suspect that has more to do with the profundity of James Baldwin than it does the direction of Raoul Peck. The film’s tremendous subject can’t help but overshadow its maker.

Peck encounters the same problem with what he chooses to show us. The most powerful images in I Am Not Your Negro—of police brutality, beatings, lynchings, protests, and riots—have more to do with the individual context and gravity of the images themselves than the connections Peck draws between them. For example, his pointedly ironic choice to cut from a school shooter in Gus Van Sant’s Elephant to a riot cop, or from Doris Day to the victim of a lynching, is admirable in theory, but a little clumsy in practice.

Sometimes Peck’s eye is literal to a fault, but in other moments he strives for a much more free-associative quality, his camera roving across bridges and peering out of rain-covered car windows. These aimless ambles reach for lyricism but miss; their purposelessness renders the film an audible thesis in search of visual evidence. Perhaps this sense of restlessness represents Peck himself, a filmmaker on a desperate search for images that could ever match the evocative experience of Baldwin’s own words.

That contrast, between Baldwin’s writings and Peck’s choice of visual complement, is jarring. Even in private letters and candid interviews, Baldwin spoke with a forceful candor and sense of purpose that most writers will never achieve in their most well-respected works. Like almost any cinematic adaptation of great writing, Peck’s approach fails on arrival.

This doesn’t mean he fails entirely. But the depth of Baldwin’s writing deserves better. Then again, any night at the theater spent listening to the wisdom of James Baldwin is a good night. The line Peck draws through American history, from slavery to Jim Crow to civil rights to Rodney King to Black Lives Matter, is a line that has been drawn before—and by better documentaries—but that doesn’t mean it doesn’t need to be drawn again. Baldwin’s words still have the same power he imbued them with years ago; Peck’s asides don’t detract from that experience, even if what they add is minimal.

I Am Not Your Negro is playing at Regal Downtown West Cinema 8.