Gatlinburg Fire Victims Focus on Helping Others - The Knoxville Mercury 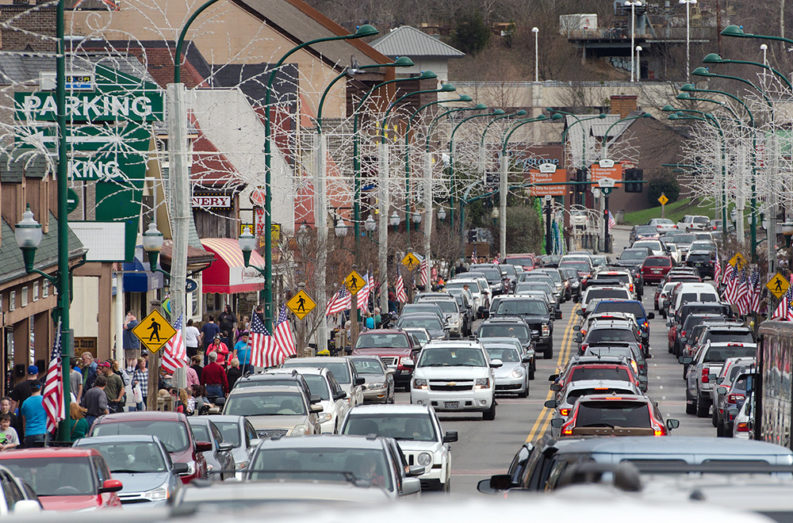 In Gatlinburg, the helpers are everywhere, as the town gets back on its feet and welcomes back tourists. The historic wildfire that leaped out of neighboring Great Smoky Mountains National Park Nov. 28 left many people’s homes in rubble. Yet a remarkable number of those people walked away from their own ashes to help someone else sweep up theirs, literally or figuratively.

At every Gatlinburg service organization, charity, and church helping fire victims, you’ll find someone answering the phone, doling out gas cards, or delivering groceries who has no place to put their own groceries. Many say that helping others puts their own losses in perspective.

Lori Fortner is providing assistance to the needy on behalf of the First Baptist Church of Gatlinburg. Flames raged around the church, but it mostly suffered smoke damage, although its nearby youth building burned. Fortner’s home survived by a hair, but not the house her in-laws owned next door, which the church youth ministry used frequently for retreats. About 50 of the church’s 400 to 500 members either lost their homes or had a family member who did, Fortner says.

“Our home should not have made it,” she says. “We have some of that survivor’s guilt.”

Her husband, the public works director for Sevierville, dropped her at their house off the spur between Gatlinburg and Pigeon Forge that Monday afternoon to keep an eye on things at the house while he went to pick up their son. She didn’t realize how bad the fire was until she got inside.

“I stood at window watching transformers across the ridge blow one after another. I thought the window would explode,” she recalls. “I could see the top of Westgate (resort) from my home, and there were just fireballs being blasted and landing.”

She says she feels ashamed because she was “paralyzed by fear” until her husband returned after driving the wrong way up the spur. When they left, climbing over the biggest tree in their yard, they were sure that would be the last time they saw their house.

Yet it still stood the next morning, although the yard was burning. Fortner’s husband and son stamped on the flames, blew leaves away from the house, and hosed it down until curfew. “We had to give it to God again that night, because it was still dry and it was still blowing,” she says.

Like many in Gatlinburg, she suffers post-traumatic stress from her escape, and says she’ll never be comfortable in a wind storm again. But her focus remains on the many people who need help.

Miranda Paulk, who has been delivering U.S. Department of Agriculture food to struggling Gatlinburg residents, lost her home off Loop Road. While meeting with a builder at the cafe in Whole Earth Grocery in Gatlinburg one day last month, she discussed the plight of the town’s service workers, who struggle to pay their rent with reduced hours and business closers this winter. She also volunteers with Smoky Mountain Family Matters, which is working on an effort to build tiny houses in Kodak to help address Sevier County’s affordable housing shortage.

Ted Osborne, who sells rustic bird houses and slate signs from his Beech Branch Crafts and Art Gallery on Glades Road, lost his home, workshop, two barns and vehicles in the fire. But he managed to help his elderly neighbor escape, and later organized a tool drive through friends and Facebook for people who wanted to rebuild their homes. He says he was able to get about 20 people tools or gift cards with the help of generous strangers. Osborne’s mission now is to get the word out that Gatlinburg is open and its artisans still have beautiful works to sell.

Smoky Mountain Rescue Ministries has been helping people whose homes or income were devastated by the fires to get cars, car repairs, gas money, and furniture, plus pay utility bills and rent. Director Bill Black is the face of that ministry, which permeates his personal life; when he visited with friends from Georgia over a recent weekend, he came back with enough home-cooked soul food to pack dozens of freezers in Sevier County.

Black is also a supervisor at the ski school at Ober Gatlinburg, so he knows a little about seasonal work. But as he sees lack of work this winter cause unprecedented suffering among the town’s service workers, he’s been able to offer help on a case-by-case basis.

“Yesterday I gave someone money for a car repair,” he said one day in February. “Or we bought tires for folks whose tires were either damaged in the fire or picked up so many nails around town – there’s a lot of debris. Or we helped a couple who are having breathing problems and having to go to doctor as a result of sleeping on a smoked mattress after the fire.”

That was a common problem. Smoky Mountain Rescue Ministries gave away 150 mattresses in a week after the fire.

Black himself had to leave his home for a month because of smoke damage and the loss of his water system. Friends helped him scrub his wooden walls and pull up the carpet. He had to replace his heating and air system, which his insurance wouldn’t cover.

He still hasn’t replaced his own mattress.