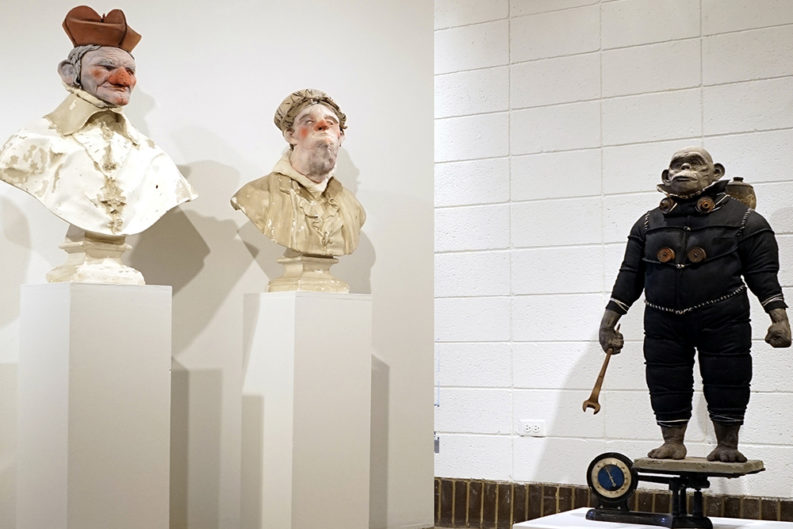 The coveted artist-in-residence program at Arrowmont, founded in 1991, offers young artists an immersive place where they can live and produce new work. For 11 months, they get a studio and living space on the Gatlinburg campus and a materials stipend. In exchange, they work eight hours a week in a variety of support areas for their host. Five artists, specializing in various media, are chosen each year; this year’s artists—Austin Riddle, Grant Benoit, Richard W. James, Maia Leppo, and Emily Schubert—will show their work from this period at Un//known, Arrowmont’s annual artist-in-residence exhibition, opening this week.

Both James and Schubert deal with the human form, but using very different methods. Schubert works with various media to produce narrative figuration through complex costumes that redefine human archetypes. Her latest series concentrates on how females are categorized. Her depictions of Virgin, Bitch, and Crone render positive empowerment to these categorizations. The costumes, constructed in an endless array of media, are installed on wire mannequins or are worn by the artist and others for theatrical performances. Virgin, made of fabric, leather, reed, buckram, wire, fishing line, copper, and papier-mâché, includes a long gown constructed of white lace and crochet overlaid with cut silver leather. A Venetian-style silver mask appears both futuristic and mythological. The entire upper portion is a tall, woven reed collar that supports an overhead flock of birds. In flight, they seem both protective and aggressive. The woven reeds wind down over the torso into a nest, which holds an external heart made of embroidered satin and velvet.

Bitch is a kind of cross between a Jean Cocteau fantasy character and Las Vegas stage performer. Crone is an elegant, gold-masked character who seems to have sprung from a Goya etching. The black and white dress, with a skirt constructed like a three-layer wedding cake, has insets of the Indonesian-style shadow box animations Schubert has produced as individual works. The black and white silhouette strips are brought further to life by an interior lighting system that is used during receptions and performance.

James’ breathtaking skill with ceramic portraiture, fiber art, and found objects allows him to create rough and powerful human and semihuman characters. The ceramic sections of the full-body pieces include only the extremities and head, similar to pre-20th-century doll construction. The clothing and body padding are attached over connecting armature.

Albert V1 is a dystopian portrait of a humanoid creature, equal parts Planet of the Apes and Mad Max. Its handsewn space suit contains charred, backpack-mounted tanks and what appear to be metal oxygen tube attachments in the front. (The metal objects were scavenged from the Arrowmont storage shed, which burned during the Gatlinburg fires in November.) In Lineage of a Pig Farmer, James mounted the upper section of a nude bald man onto an apparatus that connects a tank with rebar struts and coils of rope. The man holds an oil can in one hand and in the other a pulley that directs the rope from the base to where it punctures the man through his heart—he is literally embedded into the work tools he used for survival. The matt clay used for his flesh is streaked like a sweating mix of grease and blood.

Benoit uses construction debris to reflect the way memory and time soak their way into our surroundings. He has constructed several interior installations of walls, chair, and floor. The colors are mostly monochromatic, with the patina of fading and damage. In Fragment: piece by piece, he has sanded down original wallpaper until just a trace of pattern remains and then silkscreened a new design, not just over the original wall section but also over the chair set before it. High on the wall is a section of wood molding, with long loops of cording fed through chunks of all the materials of the installation: linoleum, molding, and wallpapered sheetrock. Some of these fragments are connected with lines of gold-leafed adhesive in the mending tradition of Japanese kintsugi, which celebrates repair rather than hiding it.

Riddle and Leppo design functional art. Riddle’s ceramic dishware and a vintage Formica table broadcast the optimism of midcentury style. Pastel colors and sleek, simple curves are used in a variety of tableware. Close examination of the details—the color lines of the interior of a vessel and the contouring of an edge—reveals the subtlety of hand production over factory mass-production.

Leppo’s delicate use of industrial materials in a limited palette of red, white, and black creates starkly dynamic jewelry. Stacked and strung laser-cut steel forms, end-capped with silicone tubes, feel both mechanical and botanical. The shapes, designed to look like petals, also resemble guitar picks. Leppo also departs from the usual curved drape of a necklace, favoring 45-degree angles and rigid vertical and horizontal lines. The modular and repeated systems she uses are suggestive of design found in everything from handbags to architecture.

Artist residency exhibits are generally fascinating to see, since they are the end result of an indulgent period of experimentation, research, and refinement by artists who are there thanks to an intensely selective process. The unusually long length of the Arrowmont residency is even more conducive to this. Viewers won’t be disappointed.

Un//known, Arrowmont’s annual artist-in-residence exhibit, is on display March 10-May 6. A reception will be held on Friday, April 7, from 6-8 p.m. Admission is free.