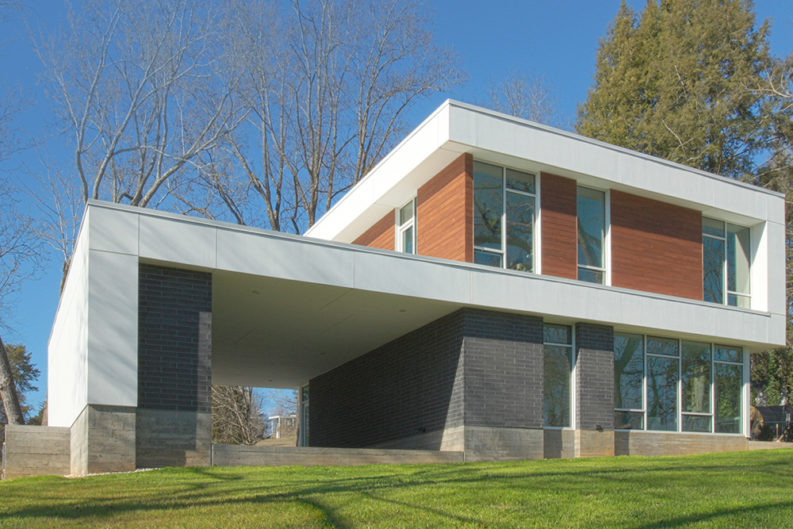 Chad Boetger has star power. A graduate of the University of Tennessee’s College of Architecture, class of 1997, he is the vice president, director of design at the 101-year-old BarberMcMurry Architects in Knoxville. In the last decade, he’s piled up numerous plaudits from the American Institute of Architects for his commercial and residential work. Now he has put his award-winning skills into practice on his family’s own new Holston Hills home.

“It’s every architect’s dream,” he says of designing his own family space.

The result is a two-story modernist gem on the Holston River. The exterior is a statement in steel, glass, and cypress. Inside, the home features expansive views from each of the living and guest spaces, with an open floor plan in the main living and dining area, an open-concept on the second floor, with the den and other rooms clustered around the open stairwell, and a complete orientation to the riverfront terrain. Built-ins and custom fixtures make smart use of the home’s 2,800 square feet and carry its personality throughout.

Boetger says that his love for modernist architecture has become a passion/obsession. It began when he studied Frank Lloyd Wright in college and deepened as he learned more about the architects who influenced and were influenced by Wright. His wife, Carolyn, who is a graphic designer, is a more recent convert. Boetger teases that when they started dating, 15 years ago, her idea of a dream home was something sprawling and Italianate.

Until recently, the two lived with their 6-year-old son in downtown Knoxville. They chose the 90-year-old Holston Hills neighborhood, just east of downtown on the Holston River, because it’s convenient to everything while still having a suburban, almost rural feel, with mature trees, large lots, and hills towering up over the community golf course or rolling down to the riverfront.

The neighborhood is rich in history, with a club house that was actually designed by Charles Barber, the founding architect of Boetger’s own firm. The neighborhood is also home to one of Knoxville’s most architecturally significant residences, a house built in 1943 by husband-and-wife architects Alfred and Jane Clauss, who are also known for a modern enclave called “Little Switzerland” in South Knoxville. Pointing out the stone and wood and glass structure, visible from the lawn of his own home, Boetger says, “It looks just as contemporary today as it did then.”

His love for the older homes in the area actually delayed his own building process for a bit. He and his wife had asked friends who lived there to keep an eye for a property that had both lawn and riverfront and was suitable for tear-down. A couple of places came open, but Boetger liked the houses too much to consign them to rubble. When they found one that they didn’t grow attached to, they rented it out for a few years before doing demolishing it and starting construction on their own home about three years ago. Johnson & Galyon, which he has worked with regularly, served as contractor. Boetger says he and Carolyn went through three designs for the home before their design matched their budget.

Their first decision was one of siting. Most of the neighborhood’s houses are uniformly closer to the road than the one the Boetgers have built. Although they wanted to place their own house closer to the river, Boetger says, “We wanted to respect that line established by the houses.”

His solution? A brick wall was constructed where the previous house sat, with a line of arborvitae behind it, each of which will grow to about 20 feet. Along the side of the property, landscaper Earthadelic has planted a line of young laurel trees. Eventually, Boetger says, the canopying effect of the privacy border will be such that the front lawn will be perceived as the first room of the house, with the idea of making the lines between inside and outside blend.

Inside the bright front entrance to the home, a gleaming white corridor—complemented by terrazzo flooring—leads to the open-plan living and kitchen area, where a floor-to-ceiling window frames a breathtaking view of the sheltering trees in the backyard and the grassy hillside down to the river.

Then there’s the picture-worthy body of water itself. All rooms for the immediate family are oriented with a view to the Holston—the master suite, which is off another downstairs corridor, the upstairs den/playroom and their son’s room. Even when the family is driving into the carport, an exterior wall that might have blocked the river view has been foregone in favor of openness, so that there is a sort of “disappearing edge” effect toward the water.

The two guest rooms, off the second floor’s open stairwell, face the front lawn, where the views are also framed expertly. In every corridor, and at the top of the stairs, the journey terminates in a window.

“I pay attention to what you are seeing when you go down a hallway. You don’t want to look at a wall,” Boetger says.

He’s created this eye to the outside even when a wall at the end of the corridor would have left more space in the adjacent room. That makes the smart use of space in the rooms themselves even more important.

“We’ve tried to maximize every nook and cranny,” Boetger says.

In the great room, drawers and cabinets for an entertainment center recess into a roomy storage space under the stairwell. Pockets installed in the ceiling keep blinds up and out of the way. Built-ins in the family room and their son’s room help corral clutter, as does a room-sized walk-in closet in the middle of the home. (In one of the home’s many nods to energy efficiency, the light shuts off when the closet door is closed.)

There are numerous custom touches throughout. Superior Kitchens created the cabinets and countertops, including a custom-made slot-style sink in the bath and his-and-hers slot style sinks in the master bath.

“It’s the kind of detail no one else will ever notice,” Boetger says. “But I’ll know.”