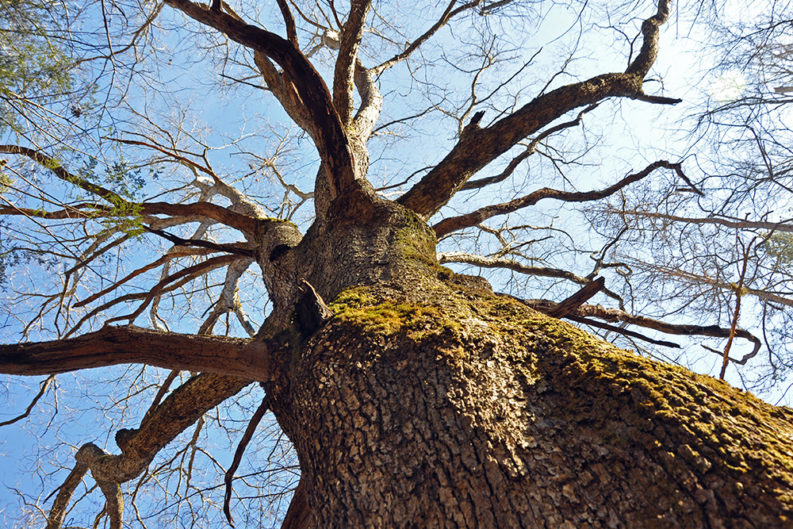 My plan was to pick up Ben Montgomery, the great-great nephew of the famous Grandma Gatewood, from Sevierville’s Rose Glen Literary Festival and take him for a hike in the Smokies.

I spent a couple of days worrying over where to take this guy, who had written a biography of Gatewood, the first woman to hike the Appalachian Trail, completing it at the age of 67 back in 1955, when the trail was in bad shape and poorly marked.

Maryville College biologist Drew Crain suggested the Little River/Cucumber Gap/Jakes Creek loop at Elkmont. Travis “Shepherd” Hall, a 900-miler who conceived the Smoke Ring Trail, suggested Porters Creek or Ramsey’s Cascade in the Greenbrier area. Good trails all, but I’d walked each of them myself, and I wanted to stray from the familiar to discover a trail along with Montgomery.

I still hadn’t decided on a trail that Sunday morning when I was preparing to go to the literary festival, thinking I might drive Montgomery up past Sevierville to the Cosby area, maybe meander toward the old-growth loop at Albright Grove. I considered hiking up to Spence Field on the AT, but we wouldn’t have enough daylight to do that.

Then I happened to reread an email that made me realize Montgomery had been here and gone back to Florida on Saturday. Disappointment, embarrassment, and then relief swept over me. I hated to miss him, but now I could hike wherever I wanted to on this sunny late winter day. I didn’t have to worry about impressing anyone, about being a guide and hoping the Smokies showed its best face to the relative of one of its most famous hikers. I didn’t have to hope that we’d see a bear at a safe distance.

I headed out from Maryville in the general direction of Maddron Bald Trail with the notion that I’d try to make it to Albright Grove. It always does me good to hike beneath the winter skeletons of giants reaching up to a blue sky. 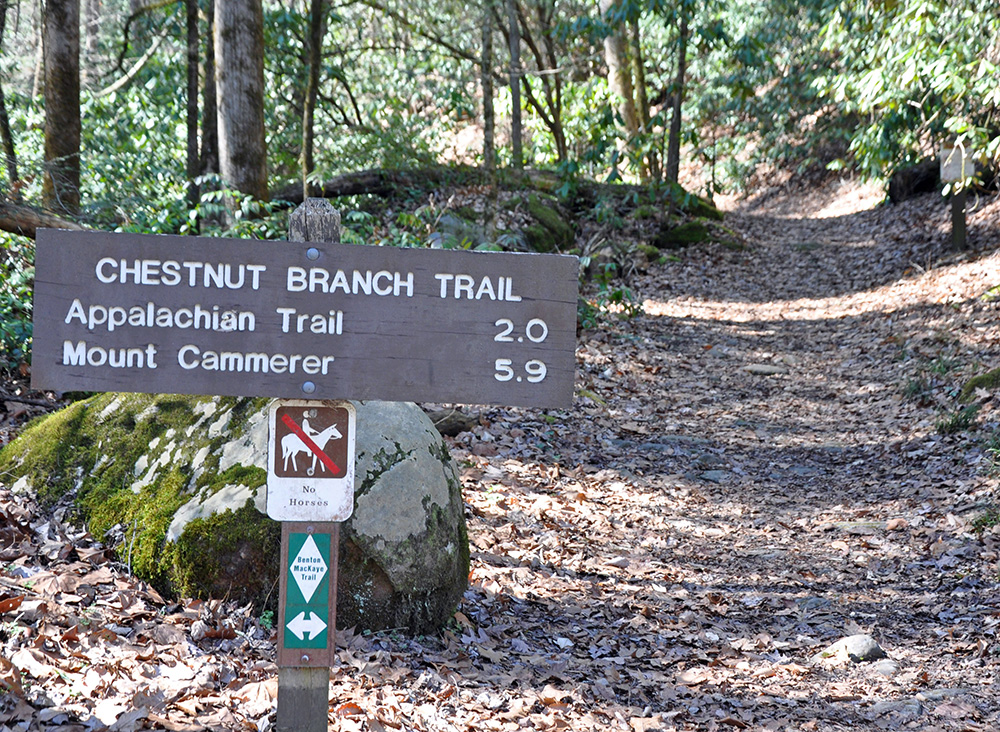 I made it to Cosby by way of Sevierville, lost track of the turnoff, and ended up at Big Creek Ranger station, where I parked and hiked up the nearest trail: Chestnut Branch, which happened to lead to the AT. If I couldn’t be with Gatewood’s nephew, at least I could commune with her spirit on the 2,000-mile trail she’d walked in her Keds.

I read later in Hiking Trails of the Smokies that there were vestiges of settlements up and down this trail: rusted implements, English ivy, remnants of rock walls and fence posts, all of it lost on me.

This was a climb, relentlessly uphill for 2.1 miles. I meditated on the 67-year-old woman who hiked a thousand times that, no doubt on steeper grades. I put my head down and focused on putting one foot in front of the other.

At what I thought was nearly the top of the ridge, I met a youngish hiker coming down. He said I was about halfway and that it got really steep at the end, news I could have done without.

Five minutes later, I met Craig, from nearby Newport, who revised the estimate to the ridgetop. He had the biggest can of bear spray I’d ever seen in a holster on his belt. It was the size of spray paint can.

He said he’d bought it after an acquaintance was mauled near Elkmont a few years back. And, yes, he’d seen bears on this trail. We talked about trails we loved. He’d hiked to Mount Cammerer 178 times. I liked the old-growth giants of the Boogerman Trail, but he said it felt a little dull and needed a vista.

Having broken a heavy sweat, I removed a layer while talking to Craig, then put it back on as the breeze cooled me down again. If I wanted to do a loop, he said, I should take a right on the AT, hike to the road and back down to the parking lot, 5 miles instead of the planned 4.

“I might do that,” I said, thinking no way in hell, I’m already beat.

The uphill grade gentled out for a while and then it climbed steeply through a thicket of rhododendrons to the top of the ridge.

I walked a quarter-mile one way and a quarter-mile the other way on the AT, imagining the ghost of Grandma Gatewood coming through here that spring, in May, after about a month of hiking from Georgia. She was about to leave the Smokies and head into the Pisgah National Forest where Max Patch Mountain awaited her. 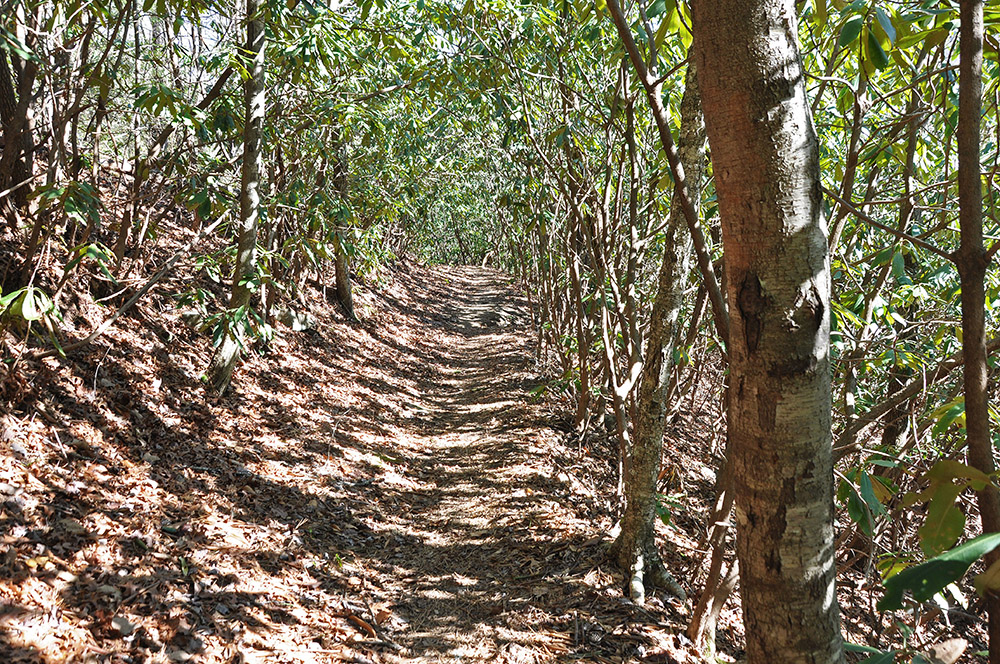 Like me, she loved the tunnels created by the overarching rhododendrons, which partly sheltered her from the rain. Sweating from my 2-mile hike, I marveled at her achievement, at anyone’s long-term commitment to hiking that far, putting one foot in front of the other billions of times. There were easy days and difficult ones for her, and I hoped that she came through here in high spirits.

Gatewood’s next stop of note: Hot Springs, N.C., where a woman would give her a glass of buttermilk and a piece of cake.

I recommend Chestnut Branch as a short, intense trail that takes you up to the historic AT. More importantly, I recommend just going to the mountains, without an agenda or a clear destination, and taking the first trail that feels right.

If you opt for a more direct route to Chestnut Branch, take I-40 east to Exit 451. It’s 2.3 miles to the Big Creek Ranger Station.

Montgomery emailed me and told me he had hiked up Alum Cave Trail, a good one that I hadn’t even considered.