Requiem for a Dive Bar: Toddy's Back Door Tavern - The Knoxville Mercury 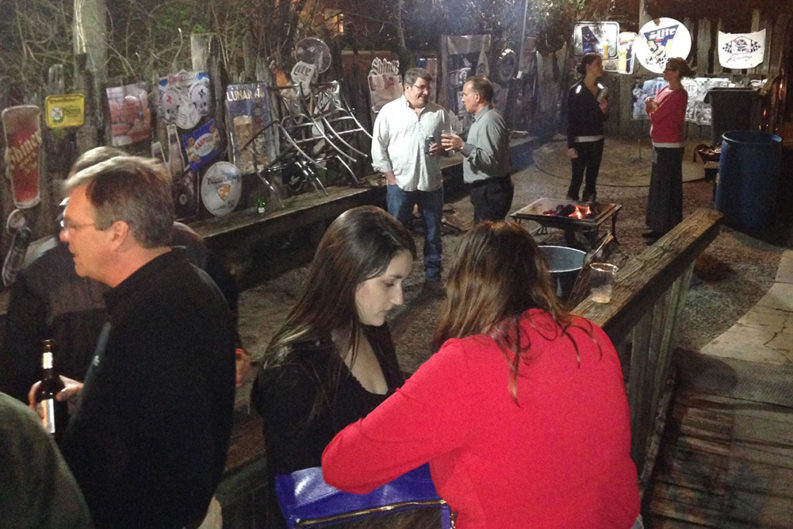 I got some bad news the other night, and I ended up having to go to a funeral. Actually, it was more like a wake. I couldn’t believe it at first, but the updates convinced me that the end was indeed near, so I went off to pay my last respects. The news had obviously traveled fast, because when I arrived the parking lot was full, and cars had spilled over into the surrounding streets and nearby businesses.

But this wasn’t an ordinary wake. The mood was not melancholy at all. In fact, it was more like a celebration, with lots of conversation and laughter as everyone shared their memories of the soon-to-be-departed. The emotions were festive, not depressed, for this was not a life cut short. Rather, it had been long and colorful; it had touched many lives, and it had been lived to the fullest. I think “Toddy” would have approved.

Another reason this wasn’t an ordinary wake is because “Toddy” was not an ordinary person. In fact, Toddy wasn’t a person at all. Toddy’s was a bar—a neighborhood dive, if you will, located in the heart of Bearden in a, what… an old house? A hardware/liquor store/who-knows-what kind of building? I’ll bet most people who travel that busy section of Kingston Pike every day don’t even see it. Bearden must have been very different when the place was built; it was considered “West” Knoxville then, and the building sat among motels and businesses that populated the main road to Nashville.

When it closed for good the other day, Toddy’s (or the Back Door Tavern, to use its real name) was about 40 years old. The interior was retro, but not because some interior designer had come along and suggested that an “old-fashioned” ambiance might be good for business. It simply had never been updated. No slick countertops, no glitzy lighting, no glass and chrome, no credit cards (!), no counterfeit faddishness posing as the most recent up-to-date authenticity. Consequently, the clientele was retro, too, or at least appreciated that particular brand of quirkiness. I’ll bet my meager savings that the wooden bar was original, the wooden walls were original; I think the bar stools, what was left of them, were original. (The men’s restroom hadn’t been updated, either.)

Judging by the pictures on the wall, everyone who was anyone in Knoxville frequented the BDT over the decades. Many left signed photographs, complete with words of affection and appreciation, eventually to be framed and hung in what would become a visual anthology of regional history. The General, Ray, Dolly, Peyton, Blue Angels, Thunderbirds, coaches, celebrities, politicians, athletes, and many more left their pictures and kind words. And not just famous people; many were of ordinary BDT patrons, perhaps holding up a big fish, often holding up an adult beverage, or maybe caught in an embarrassing moment deemed worthy of immortality.

To walk into the BDT was like walking back in time. The walls were aged wood; it felt “warm” inside. They didn’t sell wine or liquor—just beer, at most maybe 10 varieties on tap. You didn’t come to Toddy’s because they advertised “THE LARGEST SELECTION OF DRAFT BEERS IN THE UNIVERSE!” Rather, you went there because that was where your friends were. Everyone had at least one thing in common; that is, everyone enjoyed, for whatever reason, the BDT. Maybe that’s not much, but it was a start. Sometimes it was the start of something big; people occasionally met their future spouses there. People became friends, maybe hooked up, maybe broke up; in short, a lot of real life was experienced at Toddy’s.

At the wake/celebration, we shared our memories and, inevitably, mentioned the uncertain future. Where can we go now, knowing there could never be another BDT? For instance, where will The Lawyers go to plot and plan the future of Knoxville? Where will Hank go to offer his sage observations on the state of Tennessee athletics? Where will Perry go to pontificate on the evils of the Republicans and the virtues of Holly Warlick? Without getting his ass kicked?

Where can I go and sidle up to the bar, catch Lydia’s eye (one of the many sweet bartenders), and say in my very best Bogart, “Sooooo, (snort, snort) you come here often?” Where will mild-mannered, level-headed, and future barrister TJ go and offer up thoughtful mediations between tipsy, hot-headed opinionizers? Where can Jeffrey go… to just be? Where can any of us go—Buddy, Catherine, Jenni, Wyatt, Edee, Lanahan, Chick, Ashley, and the many others—where we will feel at home, among friends, like we did at the BDT?

Keeping things organized behind the bar were Reta, Big Daddy, Danielle, Liz, Holly, Lee, Jo, Izzy, and Sophie, among others, including at one point a girl named Deana Carter who aspired to be a country music star (she succeeded.) And always there was Barry, the owner and mild-mannered sweetheart-in-chief, offering his ever-present smile and good cheer.

No matter how informed or prepared we are, we are never quite ready when the end comes. The loss of a loved one changes the lives of those who remain, and the loss of the Back Door Tavern is, for those of us who knew and loved it, like a loss in the family. At the very least, it was where family gathered and did what families do—laugh, share, argue, say hurtful things, work up the courage to apologize, forgive, and then get on with life.

Generations of people, both the renowned and the inconspicuous, found there a welcoming respite from a wearying world. We all came together the other night to mourn its passing and to celebrate its life. It was a fun night; it was poignant; it was splendid. And then, at long last, as we knew they must, the lights went out.