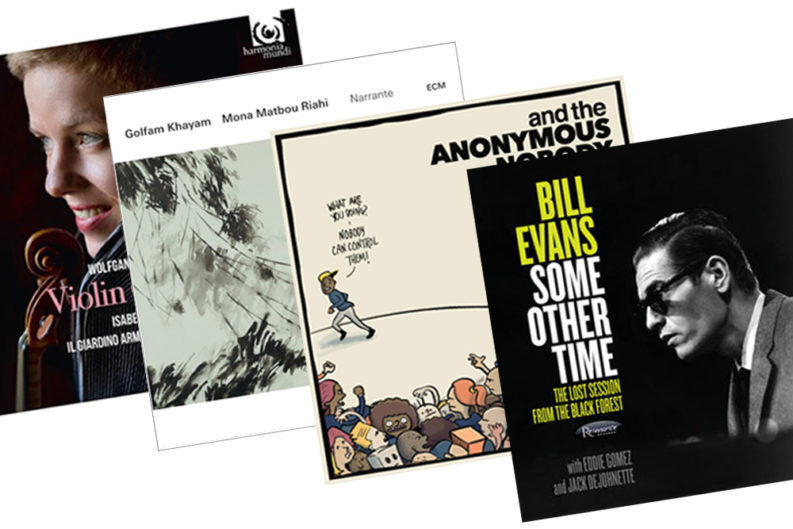 Bill Evans
Some Other Time: The Lost Session from the Black Forest (Resonance, 2016)
This double-disc set of forgotten music from a short-lived Bill Evans lineup is a welcome exception to many rules. The tapes really were lost, languishing among the estate of deceased German jazz producer Hans Georg Brunner-Schwer, who recorded Evans in his home. A colleague of Brunner-Schwer’s had heard Evans with bassist Eddie Gomez and drummer Jack DeJohnette at the 1968 Montreux Jazz Festival (a Verve recording of their set won a Grammy) and helped facilitate this session just a few days later. Zev Feldman—supposedly the Indiana Jones of jazz artifacts—tracked the recordings down via rumors and family survivors.

The music captured during this ad hoc session is sublime and exceptional. It captures Evans, one of the most expressive and influential pianists of the 20th century, as he is changing styles from subdued whisperer to percussive poet. And DeJohnette, who would soon become famous as the engine behind Miles Davis’ Bitches Brew, plays with incredible subtlety and finesse, nearly making his kit part of the piano. Evans is clearly exploring and he is clearly pleased with what he’s discovering. The most striking memory of an observer present at the session was that the musicians did not need to speak to each other. Fifty years out, the music—nearly two dozen standards—still leaves little unsaid.

Isabelle Faust with Il Giardino Armonico
Mozart: Violin Concertos (Harmonia Mundi, 2016)
Remember the name Isabelle Faust. KCPL added her fantastic recording of J.S. Bach’s complete sonatas and partitas for solo violin last spring. Such nerve—Arthur Grumiaux and Gidon Kremer fenced that music off as man-land decades ago. Faust approaches the Bach as human and living rather than sacred and distant; she allows more light and air into the music than we are accustomed to hearing. Her version probably won’t replace those male reference recordings, but it should join them on a short list of essential listening.

With this new recording—again, two hours of familiar work by a revered composer—Faust whisks away two centuries of undue emotional austerity to revive and revitalize some of the most lush and lively music you’ve ever heard—or never heard, as the effect may be. Faust is recorded here with the suspiciously stylish and attractive Giardino Armonico, more or less the SEAL Team 6 of 18th-century period performance. The ensemble elevates and propels these pieces, allowing Faust a varied and dynamic musical landscape with which to interact. Full of surprise, humor, and musical innovation, these concertos are benchmarks of the form. Mozart wrote them while in his teens; some attribute their brilliance to the fact that, at that time, he considered himself a violinist. (As a musician, he would later dedicate himself to keyboard instruments.) Faust’s treatment of this music can easily lead one to believe that it was written by someone smitten with her instrument.

De La Soul
And the Anonymous Nobody (Kobalt, 2016)
Pos, Mase, and Dave—the New York trio known as De La Soul—are uncommonly literate, patient, and musical. They manage to be insistent without being aggressive and are more likely to upset your equilibrium with their tag-team Ted Geisel wit than with playground profanity. Their music is rhythmic but never rhythm-dependent. But the mainstream hip-hop industry doesn’t know what to do with them. The band’s back catalog is in the wind, since Warner Bros. couldn’t be bothered to secure rights to the brilliant samples on the group’s early records. This new record was financed by a Kickstarter campaign, and aside from programmed loops and beats features mostly live musicians. Usher, David Byrne, Jill Scott, and the Swedish electronica quartet Little Dragon help spread the sounds out stylistically. Nobody doesn’t aspire to change the world. It just wants to turn some frowns upside down. And that, sigh, may be change enough.

Naqsh Duo
Narrante (ECM, 2016)
The Naqsh Duo consists of guitarist Golfam Khayam and clarinetist Mona Matbou Riahi, both women, both natives of Tehran who studied music abroad. This duo does not play music that many listeners would consider to be duets. The players are clearly of a mind on the limitations of formal structure and the charms of improvisation. Otherwise, their musical meetings over the course of these nine compositions seem to occur largely by chance. Khayam and Riahi alternate the tasks of rhythm and melody, only rarely approaching harmony or unison. There are elements of Iranian traditional music and ceremony, made exotic by their origins and familiar by the instruments presenting them. The result is something lovely and original and well worth hearing.