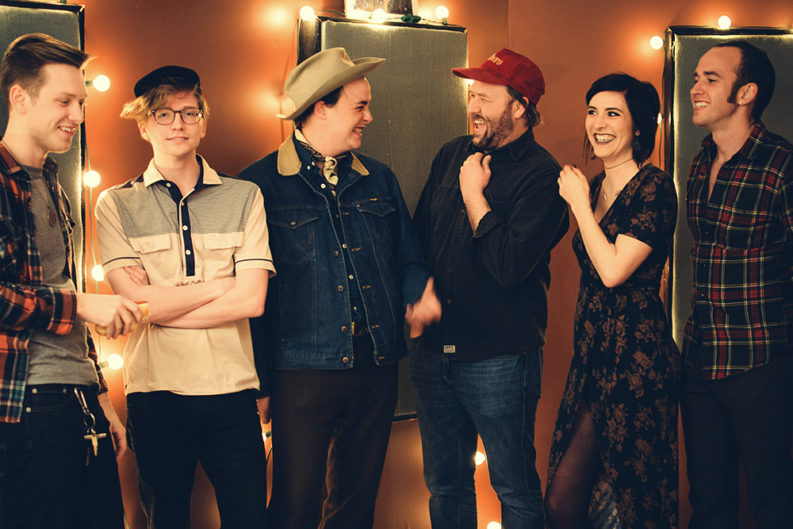 It’s a big night for Guy Marshall. And judging by the rowdy crowd that’s packed out Barley’s Taproom and Pizzeria in the Old City, things are going well before the set even starts. In fact, the closer you get to the stage, the more it becomes apparent that things are going really, really well.

But once Guy Marshall launches into its first song, the group has won the room. Adam and Sarrenna lock in on each other as they sing, while the rest of the band weaves between bluegrass-style ballads and raucous country-rock jams.

Throughout, the group’s confidence is evident. They’re clearly not concerned with how long it takes the crowd to join the party—they know it’s worth the wait.

“It’s really humbling to see people getting into the music,” Sarrenna says. “Early on, it was really only close friends and family coming to shows. We’d have 20 or so people at places like the Longbranch Saloon, and that was a lot. Now, the people that we don’t know outweigh the people we do. The thing that really blows my mind is when I see people I don’t know singing the songs. ”

The band’s show at Barley’s on March 3 was the start of an IndieGoGo campaign to fund Guy Marshall’s second album. Over the past four years, the current lineup of the band has performed at venues across Knoxville. As their fan base has swelled, they’ve steadily progressed from coffee shops to Rhythm N’ Blooms and, recently, the Bijou Theatre. In February, the trio of Adam, Sarrenna, and Bronson landed a last-minute supporting spot for Rufus Wainwright at the iconic theater when the scheduled opening act couldn’t make it in time.

“There’s a lot of important things about that show to us,” Adam says. “I started listening to Rufus when Sarrenna and I first started dating, and I introduced his music to her. He was and still is one of our favorite artists. To be asked to open for him was bizarre and incredible. The stars just aligned.”

Now the band is looking beyond East Tennessee, with plans to use the money from their crowdfunding effort to record a follow up to 2015’s The Depression Blues. The goal of the campaign is to raise $10,000 to professionally record, mix, master, and distribute the album. But the band says they’ll realistically need $12,750 to achieve everything they want.

As far as material goes, Adam points out that most of the songs are ready to go.

“We have seven pretty new songs that are from within the last year, and we have a few others from the last album that we didn’t release,” he says. “Plus, we have others from way back when. I just need a little more time to make it flow as a cohesive album.”

On The Depression Blues, songs like the band’s popular “Cowboy Ballad” focused on the past. Many of them celebrated the life of Adam’s late grandfather, the band’s namesake, Guy Marshall. Now, the band is looking ahead, focusing less on nostalgia and more on the present.

In addition to recording an album, Guy Marshall plans to use the money they raise to expand their reach across the region. To help, they’ve hired a manager, Oslo Cole, and a booking agent, Cory Smith. For the next year, they expect to book more shows around the Southeast and beyond.

“The two of them getting excited about what we’re doing has really reunited the band in certain ways,” Sarrenna says. “It was kind of a struggle for a bit. We were playing a lot in Knoxville and it was totally fun, but I think we were all like, ‘What’s next?’ Now, dates are filling up on our calendar and it’s given everyone a new motivation as a team.”

Going forward, the band hopes that fans will continue to support them in whatever way they can. And, judging by the Barley’s show, that support will be enthusiastic.

“It’s really less about attracting fans and more about building a community,” Adam says. “If you can donate, that’s great. But we really just want people to share—share our music and tell your friends about it. Tell the folks you know to come see us and see what we’re all about.”