Beyond Politics: Stories and Faces From ACA Forum - The Knoxville Mercury 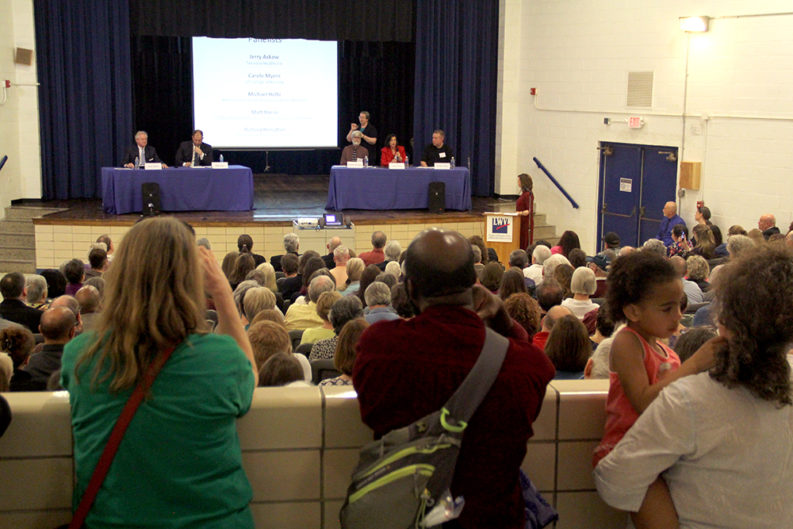 By ones and twos they came to the podium in front of a packed house. Their voices didn’t quaver and their courage didn’t falter as they shared intimate details — before an overflow crowd of at least 400 people in the Whittle Springs Middle School auditorium — about their health problems and physical and financial challenges.

Their stories were part of a two-hour long discussion Thursday evening of the consequences of repealing — or “repairing or replacing” — the Affordable Care Act that has allowed access to affordable health insurance for millions of Americans.

The ACA is in the crosshairs of the Trump Administration and the GOP majority in both chambers of Congress. News last week that Humana would no longer offer individual health plans — including those on the Tennessee ACA marketplace — added urgency to the concerns of those who have been helped by the hallmark legislation of the Barack Obama presidency. And based upon the overflowing parking lot and standing-room only crowd, many people share those concerns.

Some 40,000 people in the Knoxville area alone could still be eligible for federal health care subsidies under the ACA next year, but have no insurance carrier, according to Sen. Lamar Alexander’s office. Simply put: If you live in Knoxville and have health insurance through the state ACA marketplace, or individual coverage from Humana, you will lose it as of Jan.1, 2018 and have to buy it at a potentially inflated cost elsewhere. Humana is the only Knoxville-area carrier participating in the plan.

Thursday’s forum was sponsored in part by the office of Mayor Madeline Rogero, the League of Women Voters, the Tennessee Health Campaign and others, and featured a five-person panel of health care experts and an economist. Event organizers, including Randy Kurth, a retiree who has prostate cancer and is three years away from qualifying for Medicare, invited congressional representatives, none of whom committed to attend. Some Knoxville-area state legislators, including Sen. Richard Briggs and Reps. Bill Dunn and Rick Staples, were in attendance.

While the forum members were articulate and thoughtful in response to questions submitted by the audience, the main order of the evening was the sharing of deeply personal — and often poignant — stories about survival, perseverance and anxiety about the possible loss of affordable health care. Full video of the event can be viewed at www.wate.com (anchor Lori Tucker facilitated discussion).

Here are two of the stories, verbatim, shared Thursday night: 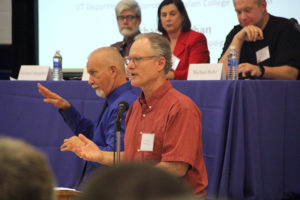 “My name is Randy Kurth and I have cancer. The good news is I caught it early. I was diagnosed in 2014, and I had surgery in 2015 and last month I finished up seven weeks of radiation treatments. I am very fortunate, my prognosis is very good.

“There’s a very good chance that for the time being I’m cancer free, and hopefully going forward, but with cancer it is the type of thing you just have to take it with time. My father, uncle and grandfather all died of prostate cancer at a relatively young age, and since longevity is not really a strong suit in my family I retired early. I went and retired at 58. Where I retired from I don’t have a pension or any kind of work-related health benefits or anything; basically my retirement is 100 percent self-funded.

“The bad news is the uncertainty surrounding the status of my health care right now. I purchased a private health insurance policy in 2012, when I first retired, and it was a $10,400 deductible, a fairly high deductible and no prescription coverage. My plan was grandfathered in before the ACA, so it’s an acceptable plan, for tax purposes, and I have to pay the penalty, but the problem is it doesn’t have the ACA benefits of covering pre-existing conditions, plus my insurance can be canceled at the end of the calendar year, every year. As a result I get a letter every October informing me whether or not I’m going to have insurance the next year. So really with my diagnosis, my surgery and radiation treatments, what I’m wondering about is whether I’m going to be offered insurance coverage in 2018. My retirement plan was based on getting private insurance, at 58, and then I’d be able to go with Medicare when I’m 65. So right now I’m 61, and have (almost) three years to go before I’m eligible for Medicaid.

“So the question I have is: Is my existing insurance going to cover me next year? If my insurance drops and they don’t cover me, is the ACA or some type of replacement plan going to be available to me? Is that going to be an option for me? Is anyone going to insure me based on my pre-existing condition of having cancer? And if I am offered insurance am I going to be in some type of high-risk pool with very high premiums I can’t afford? Another thing I’m kind of concerned about is the ratio they use for calculating insurance for young people vs. older people. Right now I think its 1:3.5; they’re talking about increasing that to 1:5, which means that if you’re older, you’d automatically be paying higher premiums. So although I’m not participating in the ACA, the proposed changes, they’re going to impact me, they’re going to impact all of us.” 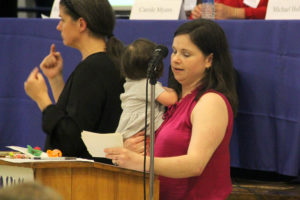 “It’s really good to hear these stories because you guys know so many people who get their coverage through the ACA. There’s a lot of other people who have spoken or are going to speak about their experiences with cancer, so I’m not going to address that. I am going to address how the ACA has helped me as a woman, and how it has helped me as a mom. The ACA means that women have access to comprehensive, preventative care and well-woman visits. It guarantees that women have access to mammograms, cervical cancer screenings. Catching cancer early means the 38 percent of women who are diagnosed with cancer at some point in their lives will get the best shot at beating that disease.

“It also covers screenings for domestic violence. This means the one in three women who are victims of physical violence get the support and care they need to leave those dangerous situations. One out of six women have been the victim of an attempted or completed rape. The ACA means these women can get treatment for any STDs or injuries sustained during that attack. They can get the mental health support they need. And unlike before the ACA, rape and domestic violence are no longer preexisting conditions that can be cause for women to be denied health care. I didn’t know that until recently.” (applause)

“Another great thing about the ACA is that women can no longer be charged more than men for coverage. (applause).

“The ACA has also helped to make sure that Madeline can get the healthcare that she needs. Before the ACA, plans rarely covered maternity services. Now plans are mandated to cover these services. I had access to good prenatal care from the very start of my pregnancy. I had screenings for risk factors like gestational diabetes or preeclampsia. When I developed gestational diabetes my monitoring, medication and supplies were covered. Four weeks from my due date, I developed preeclampsia, and that can be fatal to both mom and baby. I had to admitted to the hospital, and that was covered. When I was in labor, and my daughter went into distress, I didn’t have to worry if my C-section would be covered. The ACA means that if I had been one of the one women in seven who developed postpartum depression, I could have gotten the mental health care I needed to succeed as a new mom. The ACA means my daughter has access to the health care she needs. She gets preventative care, immunizations, screenings for conditions like autism, childhood obesity, hearing problems and depression. Catching these conditions early means that kids that have these conditions can get access to services that help them lead healthier and happier lives. Emergency care, hospital stays, treatment of chronic conditions, mental health care and treatment of substance abuse problems, all of those are covered. (applause)

“Don’t we want this for all of our kids? Don’t we want them to have comprehensive, preventative care and treatment for when they get sick? Shouldn’t we as a country want that for little girls like her?

“I wish that Sen. Alexander and Sen. Corker had been here tonight. (applause). Here’s what I would have told them: Senators, at 39 years of age, my life was turned upside down when I was diagnosed with cancer. There were moments during my treatment that were pure hell, but I got through it. I survived, unlike many of the wonderful people that I’ve met through my cancer treatment. Every day I live with the fear my cancer will come back. Senators, if you repeal the ACA without a comparable replacement plan, I will never be able to get coverage on the individual market, ever again.

“And I’d like you to explain to your constituents that are women why we should go back to a time when things like pregnancy, rape or domestic violence were things that could be denied coverage. (applause).

“Senators, I know you both have daughters, and you love them very, very much. I love my daughter every bit as much as you love yours. Madeline is the best thing that has ever happened to me. She is a miracle. I thank god for her every day. I thought because of cancer and infertility I’d never be able to have that noisy little thing right there.

“Senators, I want you to look me in the eye and tell me why that little girl doesn’t deserve the health care she needs because she is a girl or because she has a preexisting condition, or god forbid, is a victim of domestic violence or rape.

“Senators, explain to Madeline why her mom doesn’t deserve the care and screenings she needs to ensure I’m around to see her grow up, see her go to college, to see her get married, and to be able to spoil my grandchildren.

“Health care is not a partisan issue. It is a human-rights issue.”