'Tony Conrad: Completely in the Present' Brings the Experimental Filmmaker/Musician's Career Into Focus - The Knoxville Mercury 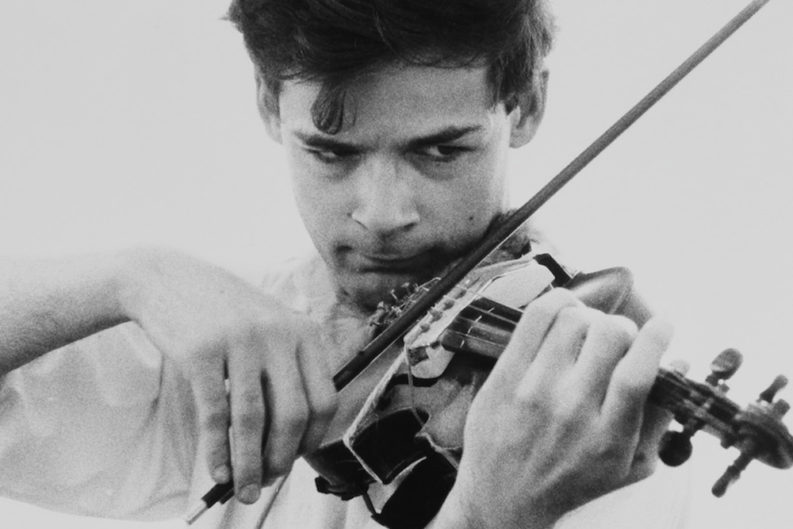 Tony Conrad is perhaps the most important American artist that you’ve probably never heard of. The new documentary Tony Conrad: Completely in the Present starts establishing that fact right away, with rough video footage of Conrad setting up some audio equipment on a New York sidewalk. Conrad pauses and points to a building across the street. In his top-floor apartment there in the 1960s, he casually notes, 20th-century avant-garde film landmarks The Flicker and Flaming Creatures were created. And the Velvet Underground formed there, too.

One of the wonders of Completely in the Present, and of Conrad’s life and work, is that such revelations don’t stop coming. Conrad would be notable to history for his Zelig-like connections to the musical avant-garde of the ’60s alone, but he also spent part of the decade revolutionizing experimental film. He enjoyed a long and fruitful midlife career as a video/conceptual artist and educator at SUNY Buffalo, followed by a late-in-life return to music that elevated and cemented his reputation. (He was set to perform at Big Ears in 2016 but canceled due to illness. He died a few weeks later.) Director Tyler Hubby’s film is constructed from many of the same building blocks as more rote music docs (talking heads, archival material, etc.), but thanks to ample participation from Conrad, and some obvious inspiration from his prankster spirit, it rarely fails to delight.

The son of a traditional portrait painter from Baltimore, Conrad studied mathematics and computers at Harvard but fell into Manhattan’s downtown demimonde in the early ’60s. His mathematical background helped pry loose any attachment to the niceties of Western musical tradition, and he joined forces with La Monte Young, John Cale, and others in the seminal Theater of Eternal Music, an experimental collective that obsessed over a handful of droning tones, sometimes for hours, and in the process established the foundation of American musical minimalism.

“I wanted to end composition,” Conrad says in the film, but his conceptual purity clashed with Young’s hunger for credit and control. Their lifelong dispute over the Theater of Eternal Music’s all-but-hidden legacy forms one of the documentary’s subplots.

From there he embarked on a series of artistic shape-shifts that would define his career, even if they confounded people’s understanding of his work. Conrad and Cale joined Lou Reed in the pre-Velvets teeny-bopper band the Primitives, but Conrad soon left music behind. He applied his conceptual brilliance to the nature of film to create The Flicker, a series of black and white frames that created a stroboscopic, and psychoactive, effect. Having married and started a family, he began a series of faculty appointments at colleges, though he specialized in “how not to” make films rather than rote instruction. He connected with a new generation of artists, such as Tony Oursler and Mike Kelly, for a raft of ambitious film and video projects, but he also took time to make public-access television shows that ran man-on-the-street interviews and helped grade-schoolers with their homework. He clearly applied his wised-up but joyful antiauthoritarianism to everything he did.

Hubby’s film benefits from Conrad’s extensive participation, which helps render an in-depth portrait. Hubby never mentions the artist’s penchant for Day-Glo clothing; it simply becomes apparent over its many, many appearances. Completely in the Present spends enough time with its subject, in fact, that it captures the impishness behind Conrad’s patrician demeanor and even a few moments of vulnerability peeping out from behind his madcap grin and booming voice. It also picks up a few minor tricks from the master, cuing jumps in the narrative with “fast forward” and “rewind” graphics.

Best of all, Completely in the Present concludes with something of a happy ending. Eventually, Conrad came back to music, and the musical world—at least the underground portions of it—came back to him. La Monte Young still controls the recordings of their seminal work together, but Conrad returned to recording and performing and made the essential power of his music, and his innovation, evident, and not just as an avant nostalgia act. The drone that he helped start a half century ago continues to resonate through contemporary music, even now that he’s gone. Hubby’s film indicates that we may just be beginning to understand the breadth and depth of his achievement.

The Public Cinema will screen Tony Conrad: Completely in the Present at Pilot Light (106 E. Jackson Ave.) on Tuesday, March 7, at 7:30 p.m. Admission is free.