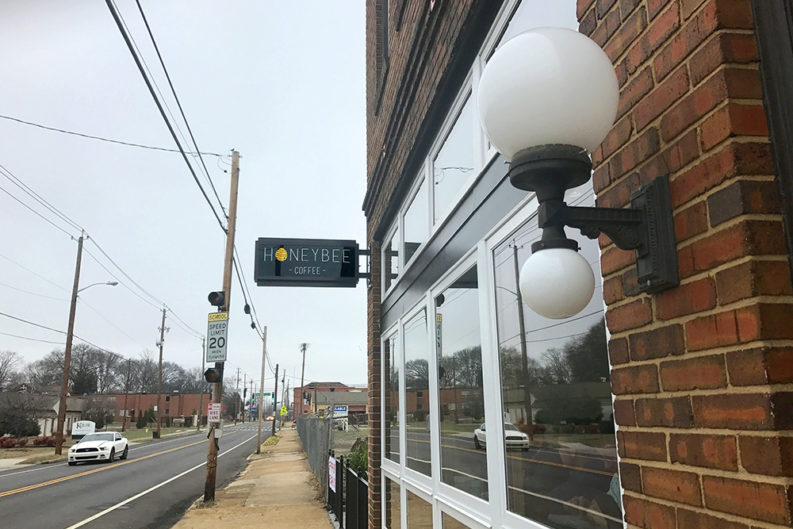 The Honeybee Coffee Company, at 700 Sevier Ave., is the sort of thing I’d expected would happen right away after then-Mayor Bill Haslam’s announcement of South Side waterfront development.

It’s been a decade ago now. Deals have been slow to work out. Some, like the prescribed removal of some industrial plants, haven’t worked out at all.

But the scale’s comfortable. There are some interesting old buildings, like the unusual South Knoxville Baptist Church, with its square steeple, and the “Model Laundry” building with the dates 1914 and 1925. Now it’s Knoxville Bolt & Screw.

The river’s right there, and despite a few blank businesses designed for a suburban industrial park, Sevier Avenue’s a pleasant place to be.

It’s easy to walk, at least until you try to get to Gay Street. Sevier intersects with Gay, and booming downtown is just around the corner. It seems far away. South Knoxville has been connected by a river bridge since the Civil War, but always seemed so remote people called it South America. In parades, over a century ago, South Knoxvillians sometimes dressed like gauchos.

Sevier Avenue is a 10-minute walk from the courthouse. It’s not necessarily a safe 10-minute walk. The city has neglected its sidewalks over there for half a century. Before it intersects Gay, Sevier Avenue splits into two one-way streets around a craggy knoll with concrete ruins of something. The lower part of it has always seemed like a narrow mountain road, with a blind curve where cars come at you suddenly, often at bootlegger speeds. When that happens, I’ve found, your best option is to leap down the kudzu slope and hope you don’t annoy the plus-size groundhogs.

For downtowners in suicidal moods, it’s a convenient amenity.

Pedestrians aren’t specifically accommodated yet; there are no crossing signals over there and the only crosswalks, old ones now fading, figure you’re turning right, toward the defunct hospital—not left, toward Sevier. Last year, the city relined that suicide curve with some bike lanes, and they do improve things measurably, assuming bicyclists don’t mind an occasional pedestrian’s impertinence.

Honeybee’s building dates to about 1924. What’s now 700 Sevier Ave. was originally 502 Island Home Pike. The city rechristened it “Sevier Avenue” in 1927—maybe because it leads over toward Sevierville Pike, or maybe in patriotic honor of Knoxville’s Revolutionary hero, John Sevier, parts of whom are buried over in the courthouse lawn. Squint your eyes and you can see his obelisk among the trees.

Now on the corner of Jones Street, 700 Sevier Ave. was not originally on a corner at all. In the early 1930s, Jones Street punched through, granting this building street-corner status.

It was home to several businesses over the years. For most of its history, it has made room for a couple of residential apartments upstairs. For a few years it was a cafe called Atchley’s, run by a neighbor and his wife.

The longest tenant, by far, moved in in 1939, and it was Charlie’s Cafe. Charlie was Charlie Goan. It was a home-cooking refuge for the working men at East Tennessee Packing Co., home of Selecto meats, and the repair shop of the East Tennessee Coach Co., the interstate bus line. The Rose Lumber Yard was along the river, with handy barge access. Model Laundry, boasting it used 60,000 gallons of water a day, was next door. Back then, Power Equipment was still located nearby, as was the South Side Coal Co. and a bottling company that produced Grapette and Orange Crush. Sevier Avenue had its own diverse economy.

Mr. Goan served three meals, but specialized in breakfast. The most expensive thing on his menu was the ham and eggs, 40 cents. But he also served Knoxville’s specialty of the 1930s, the Full House, a homemade tamale dunked in a bowl of chili, for 20 cents, and homemade pie ala mode.

High on the front is the name McMurry.

A name on a facade doesn’t always tell you much about a building. Sometimes it’s just the name of some now-obscure financier. In this case, it says a lot. Born in Blount County and a Maryville College grad, Andrew R. McMurry was the older brother of Ben McMurry, the architect who co-founded Barber McMurry. A.R. McMurry was a building contractor whose best-known projects were planned here in the Honeybee building. One of them was the original St. Mary’s Hospital, the nucleus of the medical center, a handsome brick building that’s still visible in glimpses. McMurry was here when the firm built the downtown YMCA and Holston Hills Country Club and parts of the Broadway viaduct, now scheduled to be replaced.

Andrew was in his 50s, during the time his office was here, when he married a young woman of 26. Kaptola Warlick, from Talking Rock, Ga., had moved to Knoxville to attend a business college, and got a job as the Knoxville Journal’s first female advertising representative. As wife of a successful contractor, she quit her job and became known as an expert on roses. The McMurrys eventually settled on 52 acres of old farmland near Cedar Bluff.

Her death at age 105 set off a series of lawsuits, but eventually resulted in multiple modern commercial developments and lots of parking lots on the northwest corner of Kingston Pike and Cedar Bluff. That’s one reason newspaper readers might recognize centenarian landowner Kaptola McMurry’s name.

But she knew this building on Sevier Avenue, with her last name high on the front, when she was young and it was new.

Today, in the 1924 McMurry building on Sevier Avenue, young people drink imported coffee, locally roasted, and work, or play, on laptops. They look different from the working men who crowded into Charlie’s Cafe when the whistles blew. But they may be their great-grandchildren.