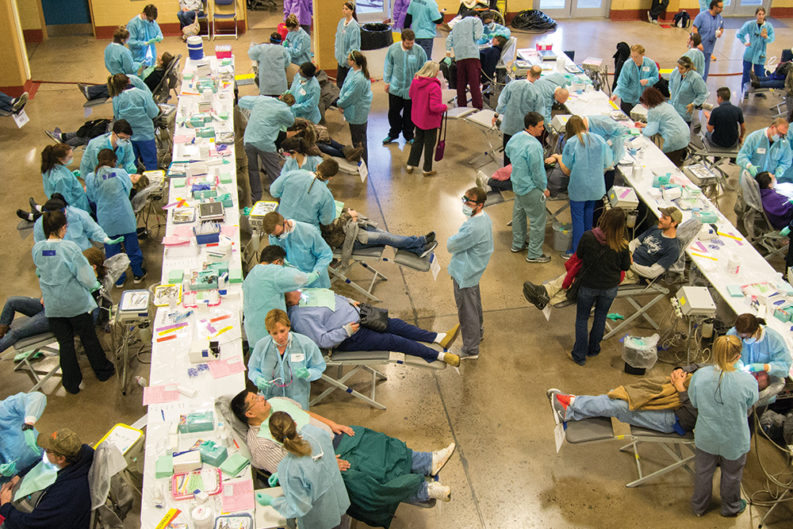 Humana’s announcement last week that it would no longer offer individual coverage in the Affordable Care Act marketplace in Tennessee has further galvanized activists trying to salvage some semblance of affordable health insurance.

Some 40,000 people in the Knoxville area alone could still be eligible for federal health care subsidies under the ACA next year, but have no insurance carrier, according to Sen. Lamar Alexander’s office. Simply put: If you live in Knoxville and have health insurance through the state ACA marketplace, or individual coverage from Humana, you will lose it as of Jan.1, 2018 and have to buy it at a potentially inflated cost elsewhere. Humana is the only Knoxville-area carrier participating in the plan.

Former state Rep. Gloria Johnson, who has organized with allies to protect the ACA—which President Donald Trump and other Republicans have sworn to dismantle—places blame squarely on Congress.

“Not only are they throwing families into chaos, but also insurance companies,” Johnson says.

The state’s refusal to expand Medicaid also plays a large part in the exits of insurance companies from the Tennessee exchanges, as does confusion surrounding the drumbeat of “repeal and replace” on Capitol Hill.

“All the numbers have demonstrated [the ACA] is working in states that have expanded Medicaid,” Johnson says. “I see people playing politics without listening to constituents. I can’t believe they would put their constituents at risk like this.”

Johnson has helped organize a panel to discuss the future of the ACA. The forum, called “ACA – Repeal, Replace or Repair?” is planned for Thursday, Feb. 23., 6-8 p.m., at Whittle Springs Middle School in Knoxville. WATE-6 anchor Lori Tucker will moderate the free discussion with a panel of area health care and policy experts.

Knoxville Mayor Madeline Rogero is listed as a sponsor of the event, and issued a statement urging attendance. “This is not a partisan issue or a partisan meeting, nor is it a rally or protest,” Rogero says. “It is a chance for the public to express their concerns and hear from experts about the future of affordable health care.”

The panel was scheduled before the Humana decision was made public and is not meant to be a platform for protest, says organizer Randy Kurth, a retiree who has prostate cancer and is three years away from qualifying for Medicare.

“We want a very civil environment where people can just get information,” Kurth says. And while no U.S. congressmen or senators have agreed to attend, “the word is getting out there, the buzz is going on. Health care is a huge part of your budget. We expect we’re going to fill that place up.”

Kurth is not on the ACA exchange, but points out “a lot of decision-making right now in Congress is going to affect all insurance.”

Knoxville state Rep. Eddie Smith also says it’s important to realize that Humana will no longer sell individual insurance, period, whether it’s on the exchange or not.

“We have to be clear they didn’t just pull out of Obamacare, but individual plans in Knoxville,” Smith says.

He and Sen. Richard Briggs are sponsoring legislation, House Bill 69, that would, working within TennCare, request a federal “block grant” of all expanded Medicaid coverage offered under the ACA.

While efforts to expand Medicaid within the state were rejected by the GOP legislative super-majority, Rep. Martin Daniel, also of Knoxville, says the federal Medicaid injection would be “presumably free from so many rules and regulations” as stipulated in the ACA.

But such a move would require finalization of the ACA overhaul that so far apparently has little traction in Congress. “The ball is in their court, that’s for sure,” Daniel says. “They need to make a move.”

Humana announced its departure from the exchanges last week immediately after its efforts to merge with Aetna were ultimately denied by a federal court that upheld a Justice Department refusal to approve the merger.

A Humana spokesperson didn’t respond to a request for comment, but the company maintains in a statement on its website that the cost of coverage for unhealthy enrollees was jacking its payouts to an unsustainable degree. In industry parlance, it is suffering from “an unbalanced risk pool.”

“Humana has worked over the past several years to address market and programmatic challenges in order to keep coverage options available wherever it could offer a viable product. This has included pursuing business changes, such as modifying networks, restructuring product offerings, reducing the company’s geographic footprint and increasing premiums,” according to the company. All of these actions were taken with the expectation that the company’s Individual Commercial business would stabilize to the point where the company could continue to participate in the program. However, based on its initial analysis of data associated with the company’s healthcare exchange membership following the 2017 open enrollment period, Humana is seeing further signs of an unbalanced risk pool.”

Alexander, chairman of the Senate health committee, urged Congress to act in a statement responding to Humana’s decision. The “news from Humana should light a fire under every member of Congress to work together to rescue Americans trapped in the failing Obamacare exchanges before they have no insurance options next year. Humana is the only insurer currently on the Obamacare exchange in Knoxville—which means 40,000 Knoxville residents may have an Obamacare subsidy next year, but it’ll be like holding a bus ticket in a town where no buses run,” he said at the hearing.

He reiterated some stop-gap recommendations to preserve coverage he originally offered during a Congressional hearing earlier this month: continue cost-sharing subsidies; reduce special enrollment periods; adjust grace periods so insurance plans are paid for their services; repeal or loosen age-rating restrictions; give states more flexibility to define “essential health benefits;” and allow the use of ACA subsidies to purchase plans outside of ACA exchanges.

“Now, it doesn’t make as much a difference to me as to whose fault that is. I can make a pretty good speech about that and you can make a pretty good speech saying why it’s not your fault or it is our fault. I think the question the American people want to know, particularly if they’re among the 11 million people in the exchanges or the 18 million in the whole individual market is, well: What are you going to do about that?” Alexander said.