Do Group Runs and Craft Beer Really Go Together? Why, Yes, They Do! - The Knoxville Mercury 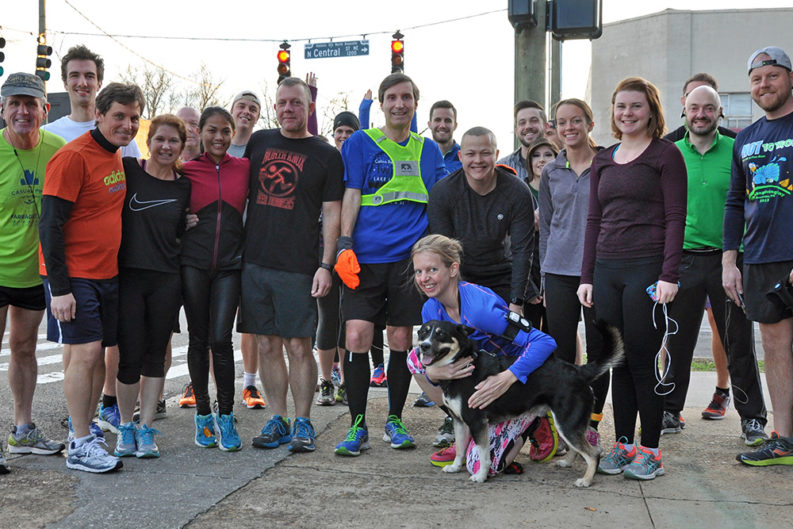 Running through the dark, winding streets of Sequoyah Hills on a chilly February evening, I was struggling to keep pace with Chris Morton, owner of the Bearden Beer Market, and Maryville College colleague Noah Bowman, both of them foot-racing veterans.

Bowman and I had shown up on the wrong day for the weekly fun run at BBM (Mondays at 6:30), but Morton gave us a private tour of one of the six runs, the OG Rope Swing. After a mile or so, I was gasping for breath and disoriented.

“Hey, what’s that little duck pond over there?” I asked, pointing at the Tennessee River off Cherokee Boulevard, just after I’d talked about paddling the length of the river in 1998.

My motivation for this torturous excursion? I was investigating the mysterious connection between running and cold beer, in particular the communities that seem to be forming at places like the Bearden Beer Market, where Morton offers a dollar off beers after a run of about 3 miles (5K).

“Earn your beer!” Bowman said during one of the first uphill grades.

Morton, who also co-owns Alliance Brewing Company, started the fun runs soon after opening BBM in 2010. He said he gets around 100 runners a week, and in 2015 tallied 5,000 for the year. This year, he’s on a pace to surpass that.

Morton is more than a beer peddler. He is a true missionary for the sport of running, looking to incentivize runners, from beginners looking to lose a few pounds to competitors in training. If you complete a race and bring the bib into the market, Morton will serve you a free pint. The market’s walls and ceiling are festooned with bibs.

There is also a more competitive fun run every Thursday at 6:30 p.m. at Alliance Brewing Company, on Sevier Avenue near Ijams Nature Center and the South Loop trails of Knoxville’s Urban Wilderness.

When Morton was the only employee at BBM, he used to go for short runs periodically, putting a sign on the door that said “Back in 10 minutes.” Instead of sitting around watching sports on TV, he encourages people to get outside and be active. Even after returning from fun runs, patrons of Morton’s beer garden can play basketball, cornhole, or bocce ball. 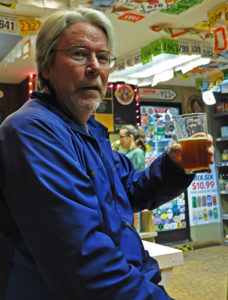 The author having a post-run beer at Bearden Beer Market.

After my duck pond comment, I began asking how much farther we had to go. When I run, only a couple times of week, I usually go a couple of miles, and that night, beyond my usual range, I was regretting the enchiladas I’d eaten for lunch.

Morton said we didn’t have far to go, but in our way was a formidable obstacle: the Mellen Challenge, a quarter-mile hill that “everyone loves to hate.”

It would be a stretch to call what I did “running” up Mellen, but Bowman and Morton seemed to approve of my wheezing effort.

Morton likes to gather members of the official Bearden Beer Market team, the Flying Pints, and finish strong in places like Asheville, but he holds back during fun runs to encourage newcomers or people who are struggling to maintain their pace and enjoy themselves.

He said that if he keeps struggling runners in conversation, they don’t seem to realize how far they’ve been or how fast they’re going.

Back at the market, teetering on a stool, I’ll have to say that the Founders IPA was one of the best beers I remember sipping. 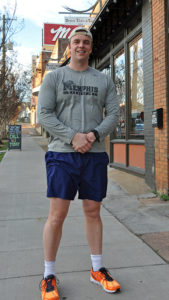 Will Sherrod, leader of the Central Flats and Taps fun runs.

With the private tour, I hadn’t experienced the true spirit of the running/beer drinking community, so after a day of rest I went to Central Flats and Taps in Happy Holler to try to keep up with the North Knox Beer Runners. What most intrigued me about this fun run was the scheduled stop at the halfway point for a beer at the Last Days of Autumn Brewing Company.

Will Sherrod, the leader of this group, told me he got the group run started about three years ago when he and one of the owners, Brian Howington (Howie), used to sit at the bar and muse about working off their beer calories. The first night of the fun run, he said, it was raining and he and Howie were the only participants.

The night I went, there were around 40 runners: men and women, young and not-so-young, and a few fit dogs of indeterminate age. One guy was pushing a stroller with a toddler aboard. Another young woman was running in sandals. They would both pass me.

Sherrod, who was a sprinter at Carter High School, said the runs starting at Central Flats and Taps are “laid back,” that people go at their own pace and even walk it if they want. Somebody in the group keeps an eye out for stragglers, he said.

Approaching the halfway point and the free beer (a small sample), I was hurting. The run from two nights before had not miraculously whipped me into shape. The beer sample, which I consumed in a couple of minutes, didn’t hurt, but it didn’t help, either.

On the second half of the run I was accompanied by Tyler Jones, who was preparing for the Knoxville Marathon, which would be his first. I ran alongside him and a kindergarten substitute teacher who said she was really struggling on her run because of an exhausting week with her unruly class.

Urging us on, Jones, slim and wiry, said he used to have to stop and rest after a mile. He loved this fun run, he said, because of the community and the culture around it.

“It’s all downhill from here,” he said, pointing at our starting point below, where a free Blackhorse IPA awaited us.

Bowman, who left me on my own for this run, said it best when describing the attraction of these groups: “I like running in races and fun runs because you’re with a large group of people, and there’s a cool collective energy to it, everyone moving in the same direction, a human tide.”

Bowman called the Bearden Beer Market fun run one of the top 10 in the Southeast.

Beer at the end of a run may not be as healthy as water, but it’s a better reward, I’d say. An article in Runner’s World, “The Health Benefits of Beer,” notes that “beer—in moderation—can be a perfectly acceptable option for after a run…[and] can even serve as a decent rehydrator.”

Featured Photo: A happy group of athletic beer-lovers at the Central Flats and Taps fun run, Thursdays at 6:30 p.m. Photo by Kim Trevathan.

Left: The author having a post-run beer at Bearden Beer Market. Right: Will Sherrod, leader of the Central Flats and Taps fun runs