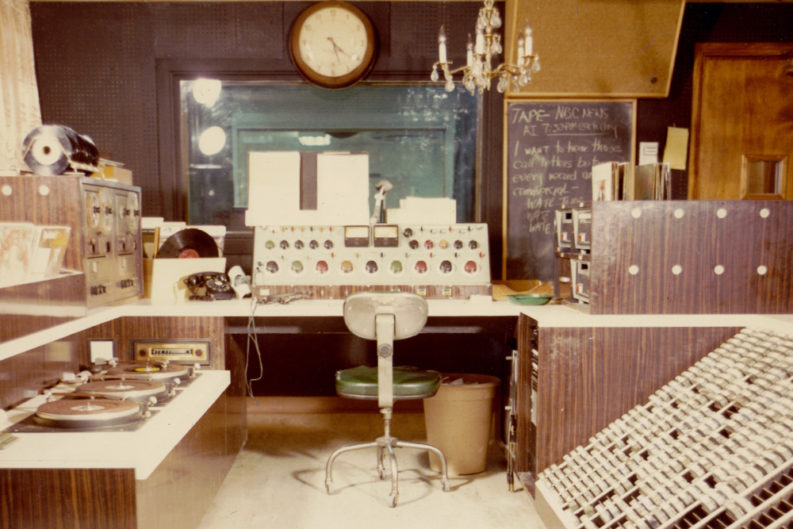 I recently received a Facebook message from a former coworker, Dave Phillips, who told me his father, Mack, was cleaning out a house that had a lot of records, some of which might be of interest to the Tennessee Archive of Moving Image and Sound. Looking up the house’s Fountain City address, the neighborhood seemed familiar, but I couldn’t place why. Once we drove into the neighborhood, I remembered that I’d seen this same house before.

Years ago, TAMIS cofounder Bradley Reeves told me about James Jones, a broadcast enthusiast well-known among local television technicians for collecting audio, video, photos, and ephemera from local radio and television stations. Jones procured a lot of it through dumpster diving. (People discard historical artifacts all the time, not realizing they might one day be important.) Reeves knocked on his door one day to ask him about his collection, but Jones wasn’t interested in talking. Reeves pointed out his house to me one day when we were in the neighborhood, noting that it was probably full of untold local history.

It was, but I doubt even those who knew Jones best would have predicted it would yield as much as it did. Inside were hundreds of boxes stuffed with books, magazines, newspapers, and all manner of audiovisual items in every conceivable format. Among shoe boxes full of VHS tapes with an unpredictable assortment of network television shows were reel-to-reel audiotapes, correspondence, memos, license renewals, slides, photographs, radio scripts, newspaper clippings, ratings records, and thousands of pages of detailed program logs and ephemera from multiple local radio and television stations, dating from the 1930s to the ’80s. Through these materials one can review the history of WNOX, WROL, WTSK, WATE, WBIR, and other stations, including their transition from radio to television.

Some of the more interesting items are WBIR and WNOX’s FCC proposals for television broadcast licenses. WBIR’s proposal is contained within four thick, spiral-bound books that include their entire proposed weekly program schedule. Some of these likely never aired, but it’s interesting to see how many programs were devoted to education and civic engagement, including shows produced in cooperation with Knox County public schools, TVA, the University of Tennessee, Lawson McGhee Library, and veterans’ organizations, including a Saturday evening program featuring two hours of folk music and Americana and “a daily discussion of happenings in the woman’s world.” The types of programs we might find today on public or community-access television stations were airing daily on one of only three commercial stations in town in 1956.

WNOX never made the transition to television, losing its licensing bid to rival WROL in 1953. But WNOX’s proposal included some interesting ideas, including Tennessee Playhouse, a Sunday afternoon show devoted to UT’s Clarence Brown Theatre; Art in Your Life, an art-education show hosted by UT’s C. Kermit Ewing; and, most intriguing, an hour-long show “in cooperation with the two negro colleges of East Tennessee,” Knoxville College and Morristown College.

Jones worked at WSJK for years, at some point retiring to look after his aging and ailing mother. In recent years he, too, became ill, and his friend and neighbor, Mack Phillips, helped look after him until Jones’ death in December 2014. Friends leaving messages on the online guestbook for Jones’ obituary remember him as a shy man who long had an interest in radio and was an avid collector of TV and radio memorabilia.

“Jim had a fascination with and passion for broadcasting since childhood,” one wrote. “He and a number of his friends created their own radio station at a neighbor’s house and from that group came one of East Tennessee’s broadcast veterans.”

Jones’ house was a testament to his love of broadcasting. In addition to the audio and video materials, it was packed with numerous books on the subject. He seemed to especially love syndicated old-time radio shows; along with the reel-to-reel audiotapes of airchecks by local DJs and broadcasts of UT football games were hundreds of such shows. Many of the tapes labeled with local call letters also turned out to have old-time radio programs—recordings of WNOX shows from the 1960s were taped over with episodes of Fibber McGee and Molly or Amos and Andy.

But it’s always best to focus on what’s been gained rather than what’s lost. Jones’ interest and obsession led him to amass an unparalleled collection of local radio and television history. What he saved from the landfill was salvaged a second time by Mack and Dave Phillips. Researchers of local media history owe them all a huge debt.