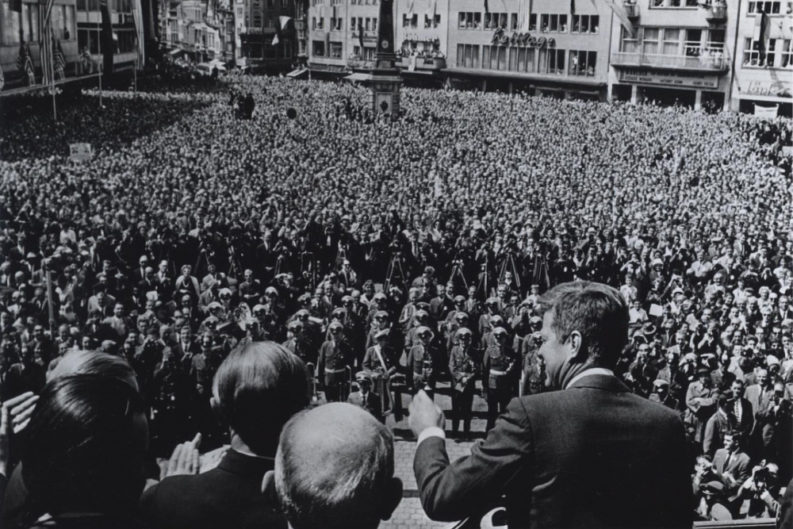 Something there is that doesn’t love a wall,
That sends the frozen-ground-swell under it,
And spills the upper boulders in the sun,
And makes gaps even two can pass abreast…
—“Mending Fences,” Robert Frost, 1914

John F. Kennedy invited Robert Frost to his inauguration; he read “The Gift Outright.” Consistent with all Republican presidents before him, our new 45th president’s inauguration was conducted without poetry of any kind. Had Frost still been living on Jan. 20, 2017, albeit at the overly ripe age of 142, it’s enlivening to imagine him reading again, this time a selection from North of Boston (1914). Facing west, the Washington and Lincoln Memorials in the distance, his shock of white hair rain matted, his voice tin against a leaden sky, a crowd respectable in size if not in manner would have heard the poet laureate caution, this business of building walls can also be:

…just another kind of out-door game,
One on a side. It comes to little more:
There where it is we do not need the wall:
He is all pine and I am apple orchard.
My apple trees will never get across
And eat the cones under his pines, I tell him.

There may be times and places when, “Good fences make good neighbors.” To be educated as an architect is to know the ways and whys of walls, to know their power and their limitations. To be wise, architect or not, is to know when building a wall is “just another kind of out-door game,” especially when “we do not need the wall…”

For anyone keeping track of the Executive Orders flurrying out of the Oval Office, or the several Twitter accounts used by this new POTUS with the Improbably Long Ties (ILT), size continues to be an itch in need of constant scratching. He scratches at the size of his election victory, his inaugural crowd, and of course, The Wall he’s been glossing about since he announced his candidacy, at times and in places incomprehensibly inappropriate for most of humankind,

Walls are curious things. In the practice of architecture, they are among the most important elements an architect manipulates; they define a place, give it character, and distinguish one place from another. In the most general sense, this is an architect’s principal job—to make the edges of things, their borders, adjacencies, and orchestrating how one passes among them.

The ancient Romans used a plow at the start of a building project for a wall of great size. As all great walls were sacred for them, it was sacrilege to transgress its boundary (Romulus’ fratricide of Remus for example). During this process, the plow was lifted and carried to the other side of any future doorway. Our English word portal comes from this very act–from the Latin portare–to carry.

Taking a page out of the Roman Empire’s playbook, as with any Trump® Organization development, virtually all of the funding for his “Very Yuge Wall” (VYW) is expected to come from places outside the organization— otherwise known as OPM (Other People’s Money). For the Romans, it was plunder (and a bit of trade). In the case of the VYW, there have been several sources (at the time of this writing) under consideration: Mexico paying the entire amount (with a bridge loan from the U.S. Treasury), or covering the cost with a 20 percent tariff on Mexican imports. In both cases, the OP in the OPM scenario is the American taxpayer. Tariffs, after all, are taxes by another name.

As professors of mathematics at MIT demonstrated back in October 2016, ever since candidate Trump first floated the idea, there has been much speculation about what this wall is going to be. How tall? What will it be made of? Will it carry advertisements? Will it be big enough to house activities, such as condos, casinos, or a clubhouse for an adjacent 36-hole golf course? Will there be valet parking and will it be wide enough to become the sort of tourist attraction that the Chinese have in their “Ten-Thousand-Mile Long Wall”? Could it be clad in Tennessee marble and if so, is there enough marble left hereabouts to cover the whole thing? By the end of this enterprise, East Tennessee may look more lunar surface than Smokey Mountains.

The border between the two countries is just short of 2,000 miles. It’s been estimated that this project would require approximately 12.5 million cubic yards of reinforced concrete, which is about 5 percent of all of the concrete produced annually in the United States each year. Leaving aside, for a moment, the matter of steel, it requires 1,389,000 truckloads of concrete, 83 times as much used in the construction of One World Trade center, which essentially had a continuous line of concrete trucks feeding it 24 hours a day over the course of five years. For those unfamiliar with building projects, this potential wall makes the Great Pyramids of Giza seem like something you might clear up with a good washing and some Clearasil®. 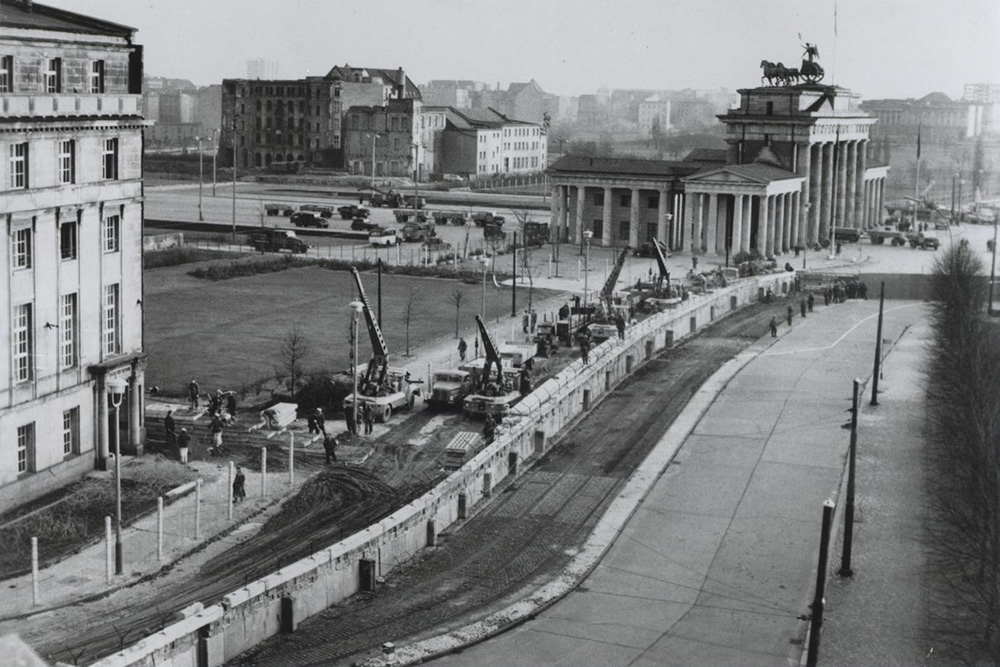 The Berlin Wall being reinforced near the Brandenburg Gate (undated).

Did I mention this concrete would need to be steel-reinforced? Some estimates calculate the VYW would need as much as 7.5 million tons of steel reinforcement bars, or almost 10 percent of all the steel rebar produced annually in the United States. Long before the election, candidate Trump was accused of purposefully pandering to the less informed among us with “Bad Math.” If anyone is counting, those MIT mathematicians projected the cost of all of this to be approximately $30 billion (2016). That is without the Tennessee marble, which would look lovely, of course, and take some of the sting out of the whole thing.

If this country does need a VYW to protect us from those that would undermine essential American values, despoil our image on the world stage, and put our armed forces, diplomats, and simple tourists at even greater risk in dangerous places, then perhaps that wall needs to be built, not between Mexico and Texas, but around 1600 Pennsylvania Ave. After which it should be deemed a National Twitter-free Zone, at least until 2020. Sure, it will be a bit intrusive in the Federal enclave, but that Tennessee marble will make a yuge difference.

Within his Twitter-free fortress, freed from constant twitches, the 45th president may find better use for those famously small hands of his. It’s a matter of record that he made their size, and pendulous body parts, foreground issues in the Republican nomination race, reminding us all that size matters in places and at times we least expect, nor want to know.

Even the size of his ties has become an issue of late. There was a collective sigh of relief when GQ finally criticized the one thing about Mr. Trump it was impossible to accept. Sure, there is the nationalistic rhetoric, uninformed jingoism, numerically challenged economics, and not-so-veiled racism—but the size of those Improbably Long Ties. Honestly, where does that thing go when he sits down? Does Reince Priebus hold it for him? Is there a discrete pocket in his over-sized suits just for tie-tucking? You could probably bridle a horse with one of those things.

But the size of his ties, much like the dimensions of the Very Yuge Wall, are really just a bit of old-school misdirection, to distract us from his more malignant executive orders. Many of us are old enough to remember the evening of Oct. 20, 1973, when Solicitor General Robert Bork, acting under the orders of President Richard Nixon, fired the Watergate special prosecutor, Archibald Cox. The White House illuminated behind him, CBS White House correspondent Dan Rather began his report on the firing something to the effect: “As it turns out, it didn’t happen during one Night of Camp David, or Seven Days in May, but one night in October.”

For 45, it all started early in the morning of Nov. 9, 2016—which will go down in history as the first real open democratic election in which the Russians have participated. It crested at 9 in the evening, Jan. 30, 2017 with the firing of Acting Attorney General Sally Q. Yates, permitting the full implementation of an executive order issued three days earlier, that barred refugees and citizens from seven Muslim nations from entering the United States for 180 days. Trump is no longer A Face in the Crowd; until this equus ferus is bridled, he is the crowd. 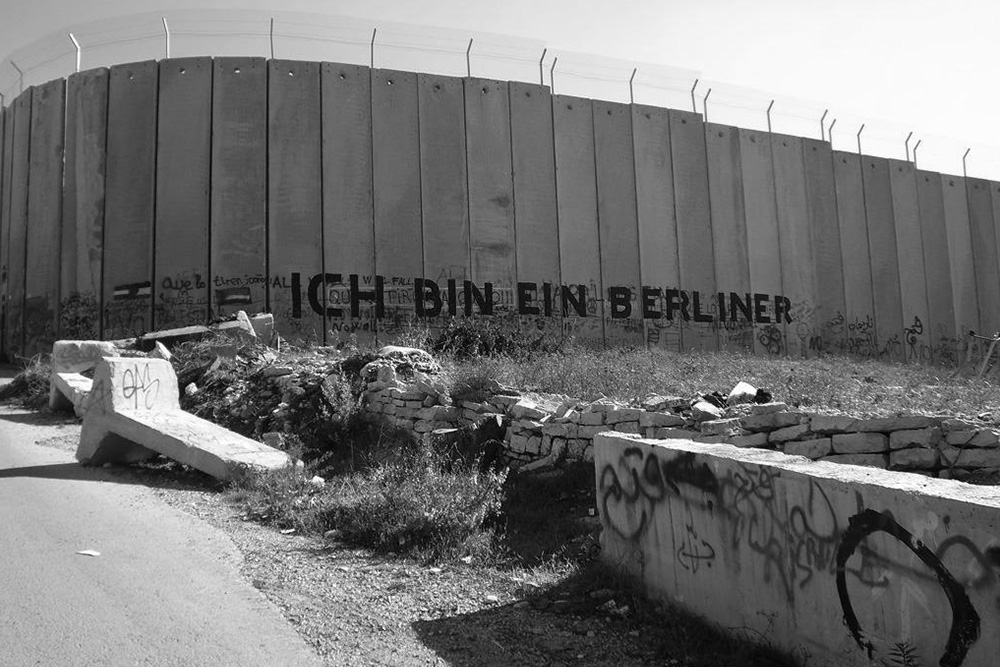 Chinese warlords began building The Great Wall of China thousands of years ago, long before there was a China, long before it looked much as it does today. You would think that the time for building walls of this sort, whether it’s between Israel and the West Bank, or along the Rio Grande, had long since passed. Twenty-five years after the rending of the Berlin Wall, it’s difficult to fathom a civilized society that does not reject building or mending such things. One would have hoped we ended forever the senseless race for profits garnered by the few who secure the many contracts in the name of security, only to leave us all more vulnerable than before this other “kind of out-door game” began.

Walls are curious things. The world would be a much simpler place if “good walls” really made “good neighbors.” Yet, if the United States is an “apple orchard” and our neighbor to the south is “all pine,” why build a wall at all? Apples don’t eat pine, nor pine, apple. Good neighbors know when to build a good wall, and when one ought to choose another route altogether.

“…Before I built a wall I’d ask to know
What I was walling in or walling out,
And to whom I was like to give offense.
Something there is that doesn’t love a wall,
That wants it down.” 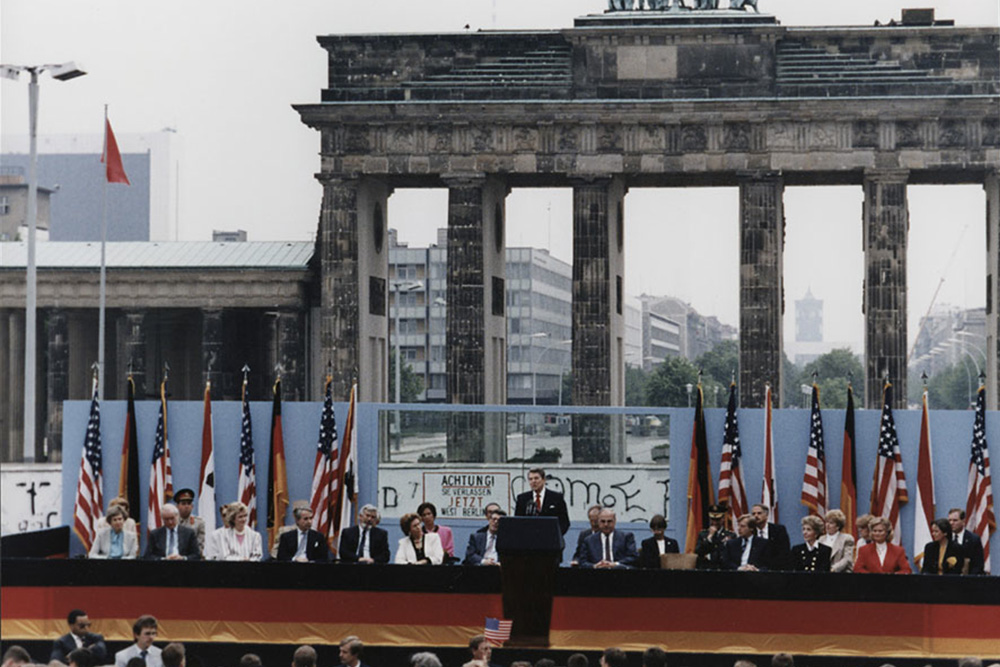