No Town Hall Commitment, But Sights And Sounds Of Freedom Ring At Duncan Protest - The Knoxville Mercury 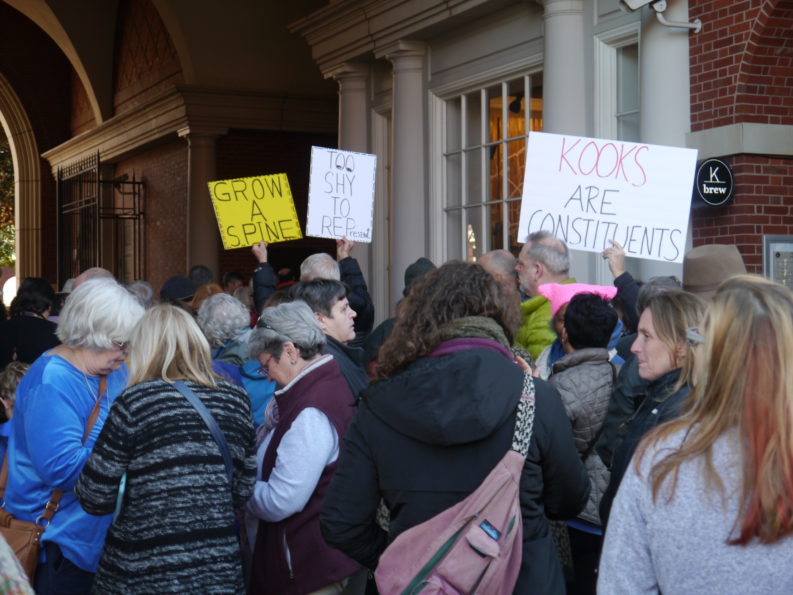 The kooks couldn’t have been kinder.

About 200 people — galvanized to action when Rep. John J. Duncan Jr. declined to host a town meeting, citing “extremists, kooks and radicals” and “sore losers” gathered outside his downtown Knoxville office Friday afternoon seeking an audience with their congressman.

They laughed, waved colorful and creative signs, chatted and sang, and in the end they passed the hat for donations to an ALS Association in honor of Duncan’s brother-in-law, who died this week of the disease and was laid to rest on Friday.

Only a handful of people, including “Kookfest” organizer Sarah Herron of Indivisible East Tennessee, were allowed into the tightly secured Howard H. Baker Jr. federal courthouse on Market Street. The congressman was not present, but chief of staff Bob Griffiths met briefly with the organizers in a lobby.

He said in no uncertain terms there would be no town hall meeting, Herron said, but seemed to walk back Duncan’s controversial comments, saying the congressman didn’t mean to imply all opposed to the Trump agenda were “kooks and extremists.”

Duncan made the comments earlier this month in a form letter sent to hundreds of people who urged him to meet with them to discuss issues, and thus was born “Kookfest.”

“He didn’t mean to label all of us that way,” Herron said as she shared her interactions with the large crowd gathered in the breezeway of the courthouse. Many of them had intended to make individual appointments with the congressman, but Herron was told appointments needed to be made through Duncan’s congressional website.

Some voiced disappointment; all remained determined.

“There are a lot of issues I have concerns with, and I find my congressmen and senators tend not to want to listen,” said Ken Williams, a retiree and military veteran who has voted across both party lines in the past.

As for the alleged kookiness of those who have voiced dissent with the Trump Administration and sought succor from their representatives and senators: “What I’ve seen is a very civil, reasonable and rational crowd,” Williams said. “Civil discourse is what we need in this country right now.” And both chambers of Congress need to police Trump, he said, citing concerns about Russian meddling in American affairs and possible ethical issues that have surfaced in the first few weeks of Trump’s presidency.

“I am specifically concerned right now for the unwillingness of the Republican party to stand up to Trump,” Williams said.

“There’s no reason to shut the rest of us out,” said Charlotte Justice. “We are reasonable people wanting be heard.” She said Duncan’s vote against the 2003 invasion of Iraq was courageous, “and I’m calling on him to have that courage again — to stand against the party line.”

The only apparent counter-protestor was a friendly man in a “Don’t Tread on Me” hat who stood to the side holding a sign in support of Duncan.

“He’s the only 100-percent conservative I’ve ever dealt with,” said Bob Johnson of Lenoir City, who scouted out the location Thursday after reading about the planned protest in the newspaper.

“To me he’s a true statesman,” he said while looking out over the diverse collection of protestors.

“What I like about this country is you can do just this,” he said. He later exchanged pleasantries with Herron — who said protestors had donated $164 for the ALS Association — after the crowd broke, full-throated, into “God Bless America” and “Rocky Top.”

The songs reverberated in the breezeway and climbed into the clear afternoon air. It was the sound of freedom. 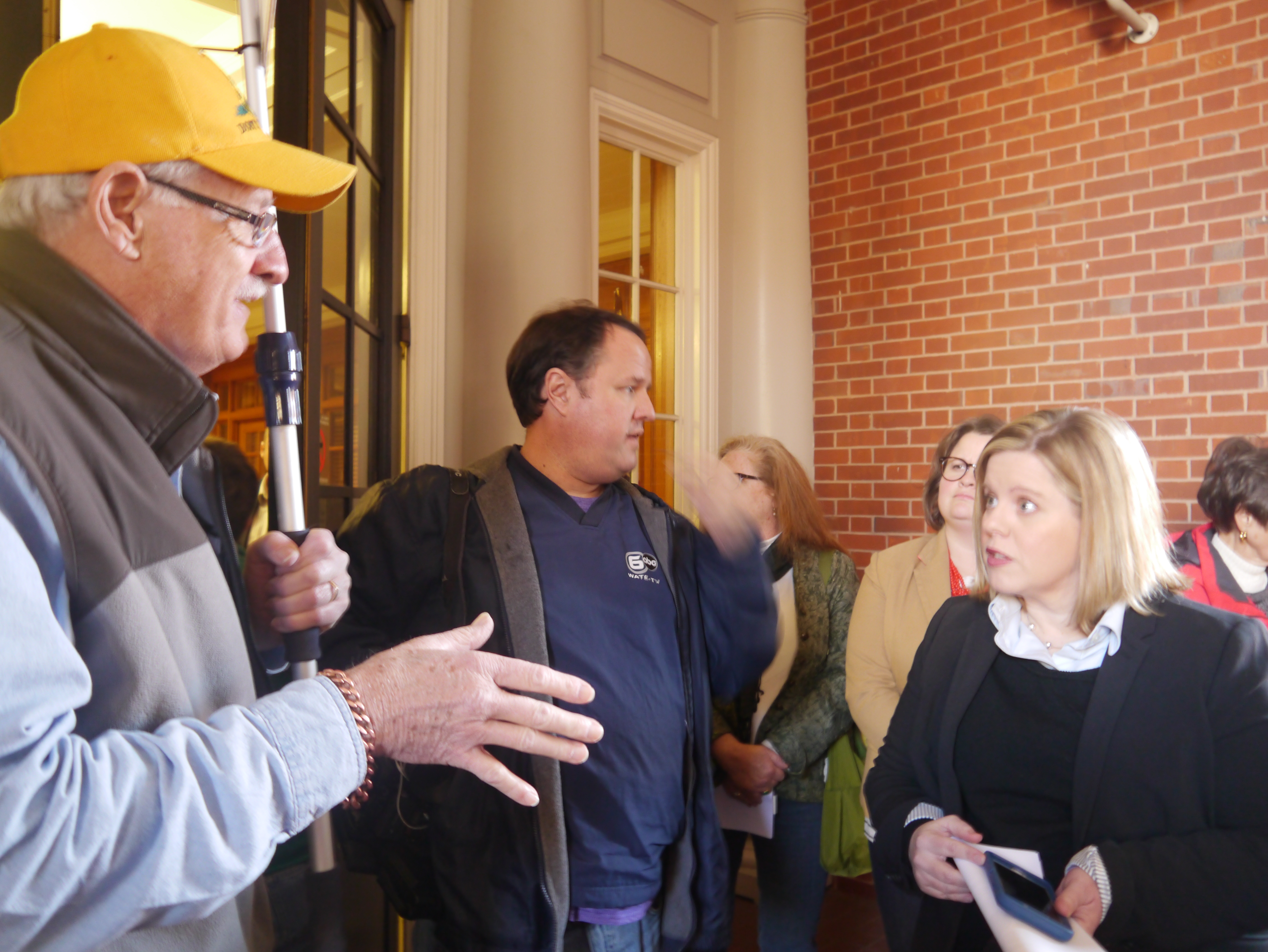 Sarah Herron of Indivisible East Tennessee, right, speaks with Bob Johnson, a supporter of Rep. John J. Duncan Jr. during a protest outside the congressman’s downtown Knoxville office on Friday. 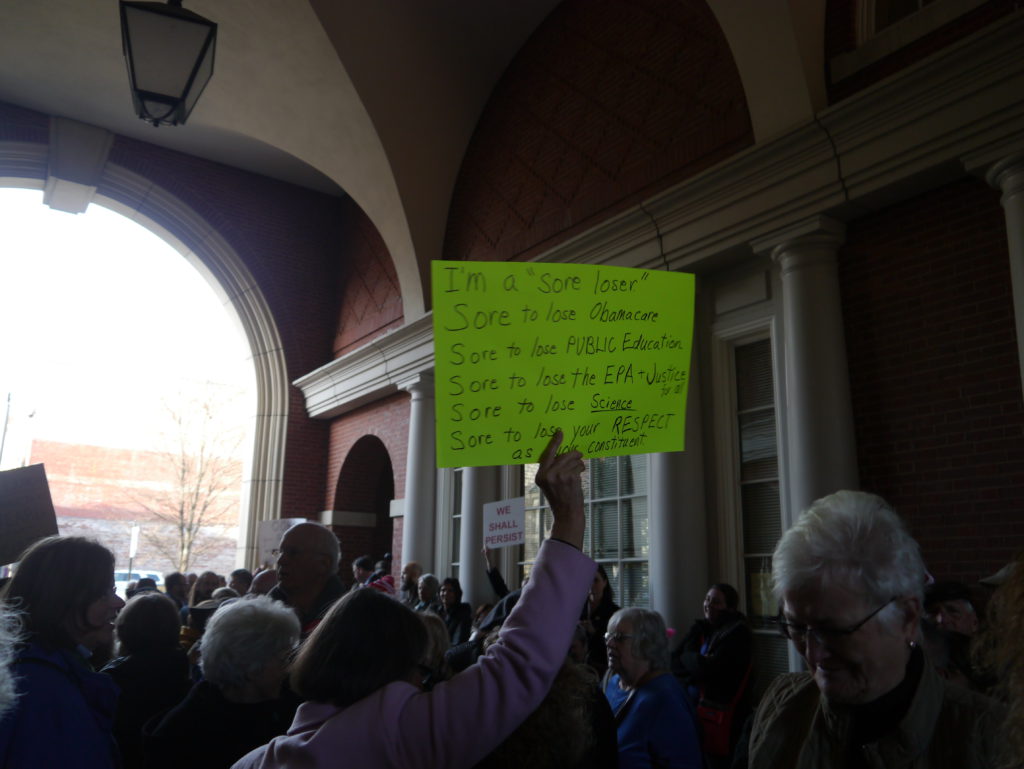