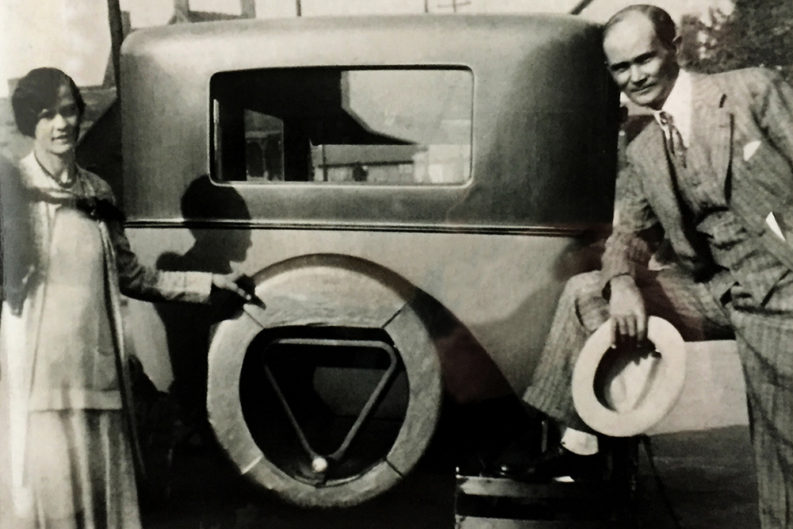 The Beck was founded in honor of James and Ethel Beck, at what had been their comfortable home on Dandridge, just east of downtown.

The Becks were one of the most interesting couples in Knoxville histor y. A lthough many blacks struggled to make a living, especially during segregation, the Becks were exceptions. For many years they were a couple much admired and envied.

James Garfield Beck, born in Alabama in 1881, was named for the Republican president who had championed public education for blacks, and who was assassinated earlier that year.

Beck came to Knoxville in 1898 to attend Knoxville College, widely known for its opportunities in higher education for blacks. A star baseball player, Beck became KC’s first athletic director. After graduation he became a schoolteacher, and principal of Lonsdale’s Mitchell Chapel School, then head of the English department at Austin High, Knoxville’s black public school. He was known to be able to recite long poems. “Thanatopsis,” William Cullen Bryant’s meditation on death, was a favorite.

In 1913 Beck became Tennessee’s first black postal clerk, working at the Custom House downtown. The same year, he married Ethel Benson, who was from Morristown. Their lively marriage lasted more than half a century.

She didn’t share James’s intellectual interests, but had an energetic interest in her community. She was at one time head of the Tennessee Congress of Colored Parents and Teachers. She vigorously supported the local “Colored Orphanage,” in Mechanicsville. In honor of her major contributions, the large facility was eventually renamed the Ethel Beck Home.

James Beck helped found Knoxville’s chapter of the National Association for the Advancement of Colored People in 1919.

Without children to pay for, the Becks saved enough money to begin investing in real estate, and earned hundreds of thousands of dollars.

Like his namesake, James Beck was a lifelong Republican, even serving as sergeant-at-arms at the 1940 Republican National Convention in Philadelphia.

According to historian Robert Booker, who knew them both, Beck was such a partisan Republican that he didn’t even like to rent to Democrats—like Booker, who in the 1960s became Knoxville’s first black representative in the state legislature. But Beck abided being married to a Democrat, even one who, as Booker recalls, openly delighted in canceling out her husband’s vote in each election.

They had a competitive relationship. James Beck had once been celebrated as an athlete, but it was Ethel Beck who became a national contender in the black women’s tennis circuits of the 1920s.

They lived near downtown, but in their retirement years moved into the house at 1927 Dandridge Avenue. Built in 1912 for a white family, it became the target of a cross burning in 1947 when Dr. E.F. Lennon, a well-known black physician, purchased the house. Lennon and his wife remained there for many years.

James Beck died in early 1969. His wife Ethel died the following year. They had been married for 56 years. Ethel Beck’s favorite orphanage had closed back in the 1950s, and the sale of its property funded the establishment of another benefit of the black community. The Beck Cultural Exchange Center opened at the Becks’ former home in 1975. Much expanded in recent years, it serves as a museum of black history, a reference library, and a meeting place for community events. It’s open Tuesday through Saturday from 10 a.m. to 6 p.m. For more, see beckcenter.net.