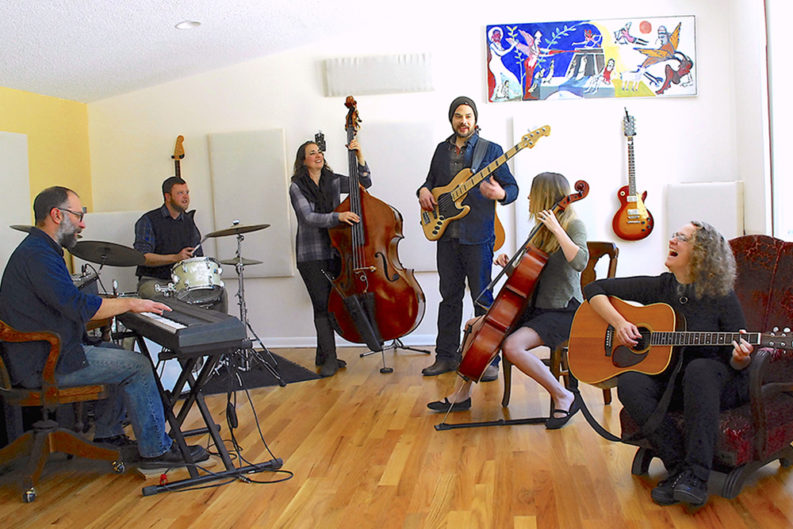 For a band that’s been around, in various forms, for 15 years, the Lonetones didn’t have a lot of momentum when they started working on their new album. Dumbing It All Down, set for official release on Feb. 18, is the group’s first recording since 2012, and the third Lonetones record in a row with an almost completely different lineup.

Gunnoe and her husband, Sean McCollough, are the core of the local folk/pop/rock band. They write all the Lonetones songs, and McCollough produces their albums. (Their musical partnership predates the Lonetones—they began playing together as an acoustic duo in 2000, shortly after they first met.) Both of them work full-time. A few years ago, not long after the band released its 2012 album Modern Victims, Gunnoe and McCollough bought an old house in South Knoxville and started making major renovations.

Then the band’s original bassist, Maria Williams, decided to take a break. And then Steve Corrigan, the Lonetones’ drummer since 2008, quit. By the time Gunnoe and McCollough started work on the material for Dumbing It All Down, they were effectively starting from scratch.

“This is the longest stint in between records since the band started,” McCollough says.

But the delays and adjustments have been worth it. The home renovations McCollough and Gunnoe recently finished included a deluxe new home studio on the property—“It’s a much nicer space, a space you want to do creative things in,” McCollough says. Besides that, the new Lonetones lineup is the band’s most accomplished, with ex-Black Lillies/Everybodyfields drummer Jamie Cook and the tag-team bass duo of Vince Ilagan (formerly of Justin Townes Earle’s band) and Bryn Davies (who’s played with Guy Clark and Jack White). Cellist Cecilia Miller rounds out the lineup, and local jazz vet Will Boyd contributed saxophone to several tracks.

Dumbing It All Down may have taken a while to get made, but none of the disruption that preceded it is evident. The differences in McCollough and Gunnoe’s styles as songwriters—she tends toward the lyrical and introspective, while he demonstrates more straightforward classic-rock chops—feel less abrupt here than they have on previous Lonetones’ albums.

“She’ll start with 15 pages of journals, all laid out on a table, and I usually just write it in my head,” McCollough says. But you can hear the distinction starting to blur on Dumbing It All Down; on the new record, McCollough and Gunnoe sound less like two distinct songwriters than partners, with each adding another perspective to the others’ imaginative vision.

Despite all the turbulence in getting the record finished, Gunnoe and McCollough sound perfectly content with where the Lonetones fit in their lives.

The Lonetones will play a CD release show at Open Chord Music (8502 Kingston Pike) on Saturday, Feb. 18, at 8 p.m. Admission is $5/$10 for a copy of the CD. All ages. (While it’s the Lonetones’ big show, they’re playing first—North Carolina indie-folk band Bombadil headlines.)