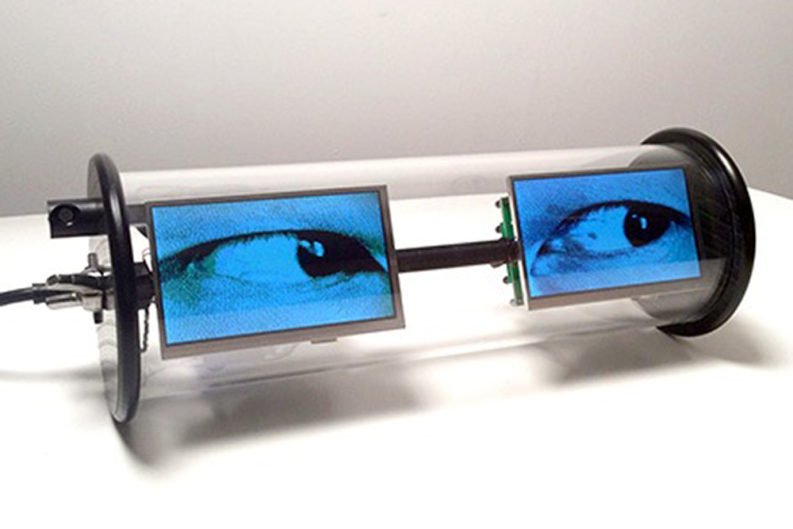 There is a presence to electronic and mechanical art that can engage your senses in a deeply personal way. A gallery filled with new media works always has its own sounds and atmosphere. The space is darkened to allow the light to come mainly from the art. The hums and whirs they produce lend the glowing and moving work their own life force.

Before you even step foot into the ground-floor gallery where Virtual Views: Digital Art From the Thoma Foundation is located, you encounter Rozin’s “Selfish Gene Mirror.” The large-screen monitor acts as a mirror, processing what and whoever stands in front of it. The image is processed through a filter that resembles a digital watercolor filter. The slow speed of the interaction allows the viewer to understand how the pixels move and reform. Though Rozin’s piece was created as an open invitation for interaction, it is also an irresistible location for selfies.

The largest work on view is Steinkamp’s “Bouquet 1.” The massive computer-generated animation of botanical specimens pulses on the wall and almost convinces you it’s a hologram. There is something almost spidery about the hypnotic movement that lends a feeling of potential threat, but the greens and pinks soften the instinctive reaction.

Leo Villareal’s “Big Bang,” a circular arrangement of 1,600 programmed LEDs, is engaged in a continuous reinvention of patterns and colors. The mathematical sequence involved is very deliberate—the micro controller that runs the random sequences in one-second intervals comes up with more patterns than the seconds in the average human lifespan. The theoretical nature of this is ironic—an average human life will last a lot longer than any computer circuitry. This, of course, is the biggest problem with electronic media. It is not archival—at least not yet.

No electronic exhibit is complete without some mention of surveillance and paranoia. Schülke’s “Spider Drone #3” is part drone, part video camera, mounted high on a wall like an alien insect getting ready to strike. Motion sensors rouse it from dormancy, and its little propeller arms and pulley system rotate it about as it tracks the humans in its territory. Installed on a shelf directly to its right is Rath’s “Electric Eyes.” The tubular specimen vial contains two video screens, one for each eye. They blink, stare, and seem to watch you as you move past. The detachment from any other anatomy gives it a creepy android sensibility.

After you’ve been tracked and surreptitiously watched, it is only fitting to have your fingerprints recorded. Lozano-Hemmer’s interactive “Pulse Index” requires the viewer to stick her index finger into a digital screening recess mounted next to a large vertical video screen. Your fingerprint is then slowly scanned and uploaded into various-sized tiled and tinted images that recede back into infinity. (It only seemed to scan a partial print, however, so any stored data could not be hacked by evildoers and used for nefarious purposes.)

Campbell has upped the technological complexity of his work since his solo exhibit at KMA in 2006. “Home Movies, Pause” is a complex grid of small synchronized LEDs that individually project what fuses as one massive image on the wall. Each individual projector has only a section of the pixels of a deliberately low-resolution image file. The choice of low-resolution imagery is critical to the emotional impact of his work. The image is blurry and vague, like a partially recalled dream or memory. The missing details erode the image like time itself.

Dorety’s “Offset Circles-Yellow Flowering Tree Against Blue Sky” layers shaped and painted aluminum with LEDs. If glimpsed quickly, it kind of looks like a dissected sound speaker, but it isn’t a woofer you are looking at. It’s really a light box. Unseen strands of LEDs hide behind the aluminum circles. My guess is they are only yellow and blue lights, but as they go through an animation sequence, they mix to also make greens. When the entire sequence is watched, it has the feel of a time-lapse animation showing what the light of the sun and moon does to an object over the course of one day.

The last piece, Gerrard’s “Dust Storm (Manter, Kansas),” appears at first to be a more traditional video, but it is actually an animation using 3-D gaming techniques to fuse contemporary and historic photographs. Though its imagery is culled from the past, it could also appear to predict a dystopian future of environmental damage from climate change.

The future of electronic media in art seems to be absolutely limitless when you examine this exhibit, not only because a fair variety of approaches is represented, but because you understand that this is just the beginning. The technology will continue to expand, improve, and be readily available to more academic programs, ensuring a steady supply of practitioners.

Virtual Views: Digital Art From the Thoma Foundation is on display at the Knoxville Museum of Art (1050 World’s Fair Park Drive) through April 16.