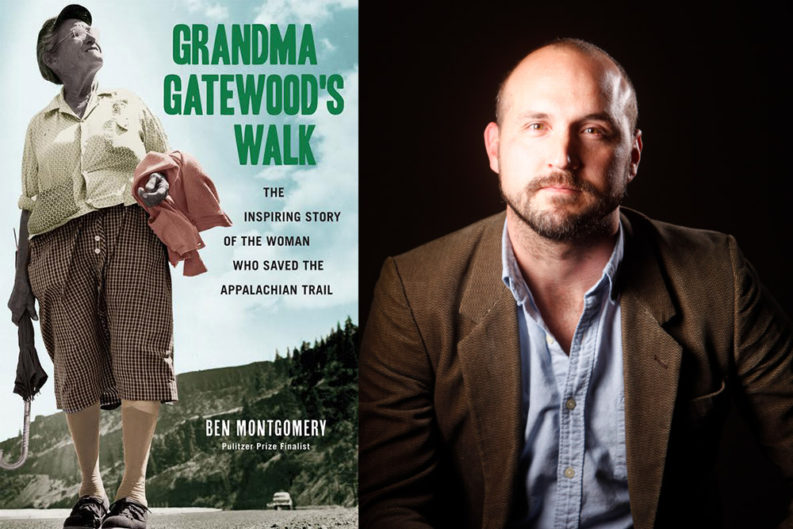 Think about that time you were hiking up a steep trail and felt like you were making decent progress, putting one foot in front of the other, sweat dropping off your nose, and then somebody who looked 20 or 30 years older than you brushed past you in a blur, not even breathing hard—and then vanished, like a ghost, around the bend up ahead.

After the shock of such encounters, I am usually inspired by the spirit and resiliency of older hikers. The subject of Ben Montgomery’s book, Grandma Gatewood: the Inspiring Story of the Woman Who Saved the Appalachian Trail, is the prototype of these ridge runners, a 5-foot-2 inch Ohioan who thru-hiked the Appalachian Trail at the age of 67 in 1955, the first woman to do it. And then she became the first person to hike it a second time (1957), as well as the first to complete it three times (1964).

Montgomery, a staff writer for the Tampa Bay Times, will give a talk and slide show on his book at the Sevierville Convention Center on Saturday, Feb. 25, 12:30-1:45 p.m., as part of the Rose Glen Literary Festival.

“She broke down the idea that the AT was only for young, physically fit men,” Montgomery says in a phone interview. She showed that anyone, regardless of age or gender, could accomplish something like this with willpower and “gumption.”

Emma Gatewood started her hike in May 1955, on Mount Oglethorpe in Georgia, and completed the 2,050-mile walk in Maine at Baxter Peak in 146 days. The year before, she had started in Maine, but had to quit, partly because she broke her glasses.

High-tech gear aficionados take note: Gatewood carried a shower curtain and warm coat for shelter and she wore a pair of flimsy canvas sneakers: Keds! (She went through seven pairs of them.) She fueled her hike with Vienna Sausages—that and what she foraged, like berries and sassafras leaves and meals from friendly locals. She carried her “gear” in a homemade drawstring sack.

In a way, Gatewood’s story came to Montgomery like a wandering hiker. He had written prize-winning articles for the Tampa Bay Times and attracted the interest of a literary agent, who asked him to come up with a book idea. He remembered his mother’s stories about this eccentric great aunt, a mother of 11 who was born on a farm in Ohio and became fascinated by the trail in the early 1950s when she read about it in National Geographic.

The article seemed to promote the hike as an easy lark, “soul-cheering and foot-tempting,” with food and shelter easy to come by. Gatewood would discover first-hand the shortcomings and inaccuracies of the article that helped inspire her hike.

Montgomery thinks part of what enabled Gatewood to complete the hike was her toughness. “She had lived a hard life, as many people did at that time,” he says. “She survived the Great Depression, raised 11 kids, and worked alongside men on the farm. She was no stranger to hard work.”

Montgomery’s research included interviews with Gatewood’s children, and he was fortunate that Lucy, the youngest, had her mom’s correspondence, her trail journal, and a scrapbook of newspaper clippings. Gatewood had even corrected errors in the newspaper articles about her.

In the process of researching, Montgomery found out things that peeled back layers of what had been reported on at the time, secrets that may have explained part of Gatewood’s motivation and drive. What emerged from her family during Montgomery’s research was a secret story of physical abuse by her husband, P.C. That abuse lasted three decades, including the final fight that nearly killed her, including a cracked rib and broken teeth.

At the time of Gatewood’s hike, when reporters asked her why she was submitting herself to such hardship, Montgomery writes, “She’d tell them she found solace in nature, away from the grit and the ash of civilization,” never alluding to her specific reasons for needing solace.

None of her grown children knew that she was on the trail that first time. She had no cell phone, of course, and she advanced through a remote habitat populated by poisonous snakes, bears, wild boars, wolves, rabid skunks, deer ticks, black flies and poison ivy.

No one had reported on the fact that she walked through two hurricanes—Connie and Diane—on that first hike, nor the fact that the rains from those storms swelled the creeks that she had to cross. Another small complication: She could not swim.

“We’ve lionized men for a long time,” Montgomery says. “I like to highlight stories about badass women who did awesome things.”

Montgomery’s second book, The Leper Spy: the Story of an Unlikely Hero of World War II, tells the story of Filipina Josefina Guerrero, who won the Medal of Freedom for her valor.

Gatewood’s trek, covered by publications such as Sports Illustrated, brought attention to the sorry state of the trail and resulted in much-needed improvements. She got lost often on the hike because the trail was so poorly marked, and one section in the Smokies had been plowed up as part of someone’s garden.

Aside from hiking the AT three times, Gatewood, at 71, hiked the 2,000-mile Oregon Trail, from Independence, Mo. to Portland, Ore. Montgomery notes that many hikers, of all ages, credit Grandma Gatewood as inspiring their long thru-hikes on trails like the AT.

“A surprising number of people emailed to say ‘I haven’t so much as walked around the block and this has motivated me to become active,’” he says.

Montgomery himself underwent a lifestyle change as a result of researching the book. He gave up the automobile as his primary mode of transportation and began walking more in a city, Tampa, that he says is the second-most dangerous for pedestrians and cyclists.

“It was life-changing,” he says. “It gave me a connection to place that I didn’t have before…helping me to see the city in a more intimate way.”

Published by what Montgomery called “a small but great press” (Chicago Review Press) in 2014, the book became a New York Times bestseller through what Montgomery thinks was mainly word of mouth.

Montgomery’s presentation at the Rose Glen Literary Festival will include the only video that exists of Emma Gatewood, an appearance on the television show You Bet your Life with Groucho Marx. Included in his slide show will be photos not in the book.