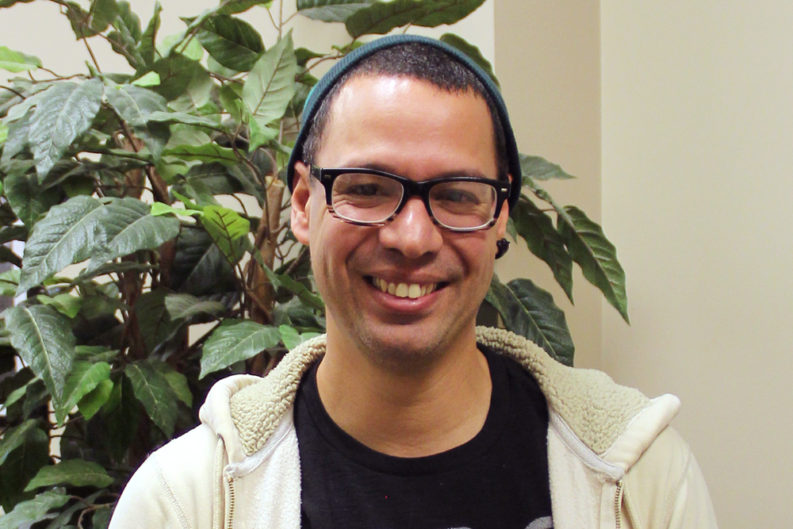 Jose Calabres sometimes feels guilty about being in America while his dad and other Venezuelans are suffering. “I never imagined I would leave my country,” says the artist and writer. “I always think you have to fight for your people, for your rights. But in Venezuela, it’s like fighting the sea. And it’s not about you—it’s about your family.”

Calabres, son of a nationally-famous sculptor, is a dissident graphic designer, musician, and journalist who spoke out against government corruption in his country. Ironically, that started while he was working for the government, as audio-visual editor-in-chief for his state’s governor. He didn’t mean to become politically active when he started his own blog consisting mostly of jokes. But then politics and human rights started to creep in, as corruption under longtime president Hugo Chávez started to sour so many aspects of people’s lives. He left government in 2011 after he was told his daughter would be kidnapped unless he stopped writing.

The governor he had worked for became an assistant to Chávez. The man’s successor, a previous head of Venezuelan intelligence services, was Rangel Silva, who has been recognized by the U.S. as “materially assisting” the narco-terrorism activities of the longtime Revolutionary Armed Forces of Columbia (FARC).

As the economy deteriorated, repression increased and food shortages left many Venezuelans hungry, so Calabres started writing again. He was active in his hometown’s 2014 street protests against the government, posting videos of them on social networks.

He says the government labeled him “a public enemy” and sent two killers to his business, where they tied him up, along with his father and wife, threatening them while the police stood by. Two months later he says he found his home ransacked, and police told him if he’d been home he would have been killed.

That was it. Calabres and his family hid with a relative in another state for a month before coming to the U.S. on a tourist visa to visit his mother, who had been living with his grandmother in the Knoxville area for 18 years. His father, who couldn’t get a visa, had to remain behind, and Calabres now sends him half his salary and ships him food packages.

Calabres’ mother, a U.S. citizen, had been trying to get him to come for a while. He and his wife, Roxana Marquez, also an artist, and his daughter arrived just after Christmas in 2015. He wept as he was reunited with his mother for the first time in almost half his life. But the move still felt risky.

“When I took the plane, I was a little afraid,” he recalls. “The U.S. is fierce with illegal people trying to come in. I thought that probably people would be uncomfortable with me.” He says that in South America, Americans have the reputation of being racist invaders (see: U.S. interference to overthrow democratically-elected left-leaning governments such as Chile’s and U.S. support for violent Contra rebels in Nicaragua).

But when he arrived at the airport, he saw that his family had the only luggage wrapped in plastic and chains. He marveled that other people didn’t expect all their possessions to be stolen. “It was a shock: Look at this! This is a secure country!” he says.

In Venezuela, Calabres says, you had to feel self-defensive all the time. “You start to think that’s normal, and it’s not normal,” he says. “It’s insane. Fifteen years ago, my country was not like that.”

The Calabres family applied for asylum after arriving in the U.S. and were granted it on a temporary basis while the two- to three-year process unfolds. He is still awaiting their immigration interview.

He says his family has found most people in Knoxville very kind, and they love to take advantage of the county’s parks. “We don’t have many in Venezuela, and the ones there are were destroyed,” he says. “We love seeing the deer!” They’ve had to get used to the idea that spending time outdoors is safe.

“You can walk the street at 3 a.m. and nobody will kill you,” he marvels.

Another refreshing change is how American institutions and infrastructure—like public transit, banks and government services—function efficiently, he says, recalling entire days spent at the bank just trying to make a deposit. “It’s awesome that everything works here!” he says effusively. “It’s what I’m looking for in my life!”

Calabres’ daughter is in fourth grade at A.L. Lotts Elementary School. Her initial excitement about the big gym and the school bus rapidly gave way to feeling isolated and miserable. She would come home crying that she would never have any friends. But her ESL teacher was wonderful, Calabres says, and after about three months his daughter settled in happily.

Calabres helped A.L. Lotts students put together a production of The Nutcracker there. He had more time that first year, when he was working as a graphic designer from home, but he has since taken a job with Jewelry Television. He and his wife, who collaborated for years on art, music, theater, and photography ventures, are also starting a pottery business. He nevertheless hopes to be able to make time to direct a production of Mozart’s opera The Magic Flute at A.L. Lotts.

Calabres isn’t used to having any free time. He says he and his wife used to work from 6 a.m. to midnight seven days a week just to earn enough money for food, as Venezuela’s shortages grew outrageous. “We’d say, ‘Okay, we win the fight today. We eat today,’” he says. “The American dream is that you can live.”

He warns, “Precious things come to be invisible, and you don’t appreciate that. It’s a very wonderful thing that you can eat every day and that you can drink clean water. Thirty million people in Venezuela don’t have any medicine. When you look at the world… having food, water, and a ceiling over your head is not normal.”

Chávez was democratically elected, but subsequent elections were suspect, and he ruled with many of the attributes of a dictator, bringing the country a brief boom through its natural resources while pushing a brand of socialism that helped the very poor but also bred corruption, inflation, and starvation.

Even before last week, when President Donald Trump issued a series of executive orders to build a wall on the Mexican border, pursue deportation of illegal immigrants, and freeze acceptance of refugees to the U.S., Calabres felt a frightening sense of déjà vu. He had heard Trump’s “Make America Great Again” rhetoric before.

“‘Make Venezuela Great Again’ was Chávez’s slogan, and now my people are looking for food in trash cans,” says Calabres, who wants to become an American citizen. “It came so freaking fast. Corruption is like a virus.”

Calabres published a short novel in Venezuela and is now writing his second, about immigrants. He has been interviewing other immigrants about what leads them to sacrifice their professions and relationships in order to leave.

“I know a guy who crossed the desert—twice. I ask why,” Calabres says. “It’s love. People look for better things for their family, their kids. Everything is about love.”

Meet Some of Knoxville’s Refugees: