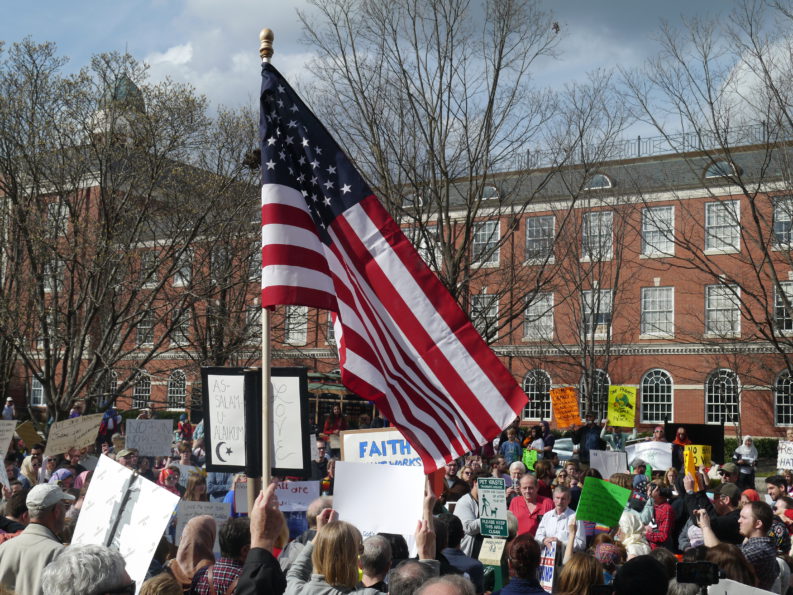 The winter of citizen discontent continued Wednesday with a march and rally that drew at least 1,000 people to downtown Knoxville to protest President Donald Trump’s executive order that temporarily banned the citizens of seven nations from entering the U.S.

A sea of people of all ethnicities, religions, and backgrounds carried motley banners with myriad messages in support of refugees and immigrants, from Market Square to Howard Baker Jr. Courthouse and back again. American flags fluttered alongside signs decrying Trump and extolling the virtues of tolerance, inclusion, and faith as the marchers moved through downtown.

They were met largely with praise from passersby, but one angry man mimicked baby cries and mocked the protesters as they moved past the old Knox County Courthouse. The ban is only temporary, he said, and stormed away after berating “liberals” and declining to give his name.

That incident was largely an anomaly during what one organizer called an “unprecedented” protest for the city.

“Quite frankly, I was surprised at the turnout here,” said Mary Ann Reeves, co-chairperson of AKIN. Following a silent vigil of about 15 minutes — broken largely only by the chirping of birds in a typically bustling lunch hour on Market Square — some 1,000 adults, children, and dogs moved along Gay Street sidewalks toward the federal courthouse.

Outside the City-County Building, the huge crowd spoke as one, reciting “New Colossus,” which is the poem by Emma Lazarus on the pedestal of the Statue of Liberty.

The travel ban from seven majority-Muslim countries, including Iraq, is based on countries identified by the Obama administration as significant sources of terrorist activity, according to the Trump administration. Critics, including former President Barack Obama, have countered that none of the countries have produced terrorists whose actions caused deaths on U.S. soil.

Many saw the move as the culmination of one of Trump’s campaign threats to “ban Muslims,” and there have been near-daily, large protests in major American cities and airports.

“Deport Trump, Keep Immigrants,” and “This is My Country. I am Sioux: You Are Welcome” the signs read, as Muslims, Jews (with signs like “Jews Against the Muslim Ban: Never Again Is Now”), and priests in their robes slowly circled Market Square. Many women wore hijabs for World Hijab Day in solidarity with Muslim women.

Judith Toy, who lives at Narrow Ridge Earth Literacy Center, carried a large puppet made of clay and papier mache that started its life as Joseph in a Christmas production but on Wednesday represented a Muslim man. “I feel that we have a rogue president, and I want to be part of the solution,” she said.

For Karzan Bahalddin, Trump’s policy is personal. Six months ago, Bahalddin, his wife, and children came to the U.S. as refugees from Iraq, where he had worked for a contractor that sold water to American troops. When the Americans pulled out, he was targeted for his cooperation, so he applied for refugee status. It took two years for his family to be approved and come to Knoxville. His parents, who are still in Iraq, had hoped to join him, but now they cannot apply or even travel to visit.

“Here also I don’t feel safe because regulations change so fast,” he said. “I fear there will be next steps of being thrown out.”

Bridge Refugee Services provides resettlement assistance to new refugees and has welcomed about 66 refugees to Knoxville since Oct. 1, providing them with a furnished apartment and help with establishing services, says executive director Drocella Mugorewera.

Thus far, Rep. John J. Duncan Jr. has remained silent on the president’s executive orders. Sen. Bob Corker called the refugee order “poorly implemented” and Sen. Lamar Alexander called it confusing and too close to a religious test that is “inconsistent with our American character.”

The vigil was one of several events this week responding to the orders. Yassin’s Falafel House, which is owned by Syrian refugee Yassin Terou, held a fundraiser dinner Monday night that was advertised to run from 6 p.m. to 9 p.m. It drew so many people that the last order was filled after midnight. Terou donated 25 percent of the proceeds and The Juice Box donated $500 through an auction, raising a total of about $8,700, Terou says. Borderland Tees also gave Bridge the profits from selling T-shirts printed with the Statue of Liberty and the words “Mother of Exiles.”

Mugorewera was thrilled at the turnout for the vigil but says it was what she expected of Knoxvillians, who have been calling last week to ask, “What do you need?” She urged people to donate, volunteer to work with refugees through Bridge, and comfort the refugees in their neighborhood.

Tonight, AKIN and the St. James Episcopal Peace Fellowship, 1101 N. Broadway, will hold a “Circle of Welcome” at St. James from 6:15 to 7 p.m, an “emergency service” to give people of different faiths the opportunity to share their alarm and concern about the impacts of the orders and extend love and support to immigrant and refugee neighbors.  The church is at 1101 N. Broadway. 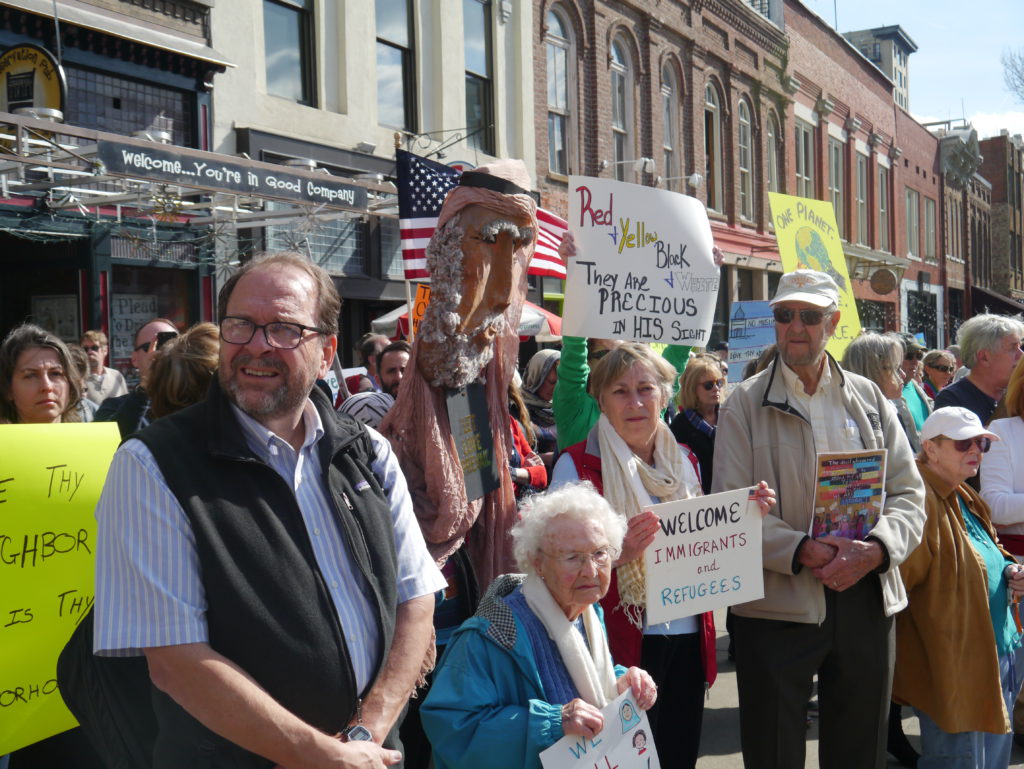 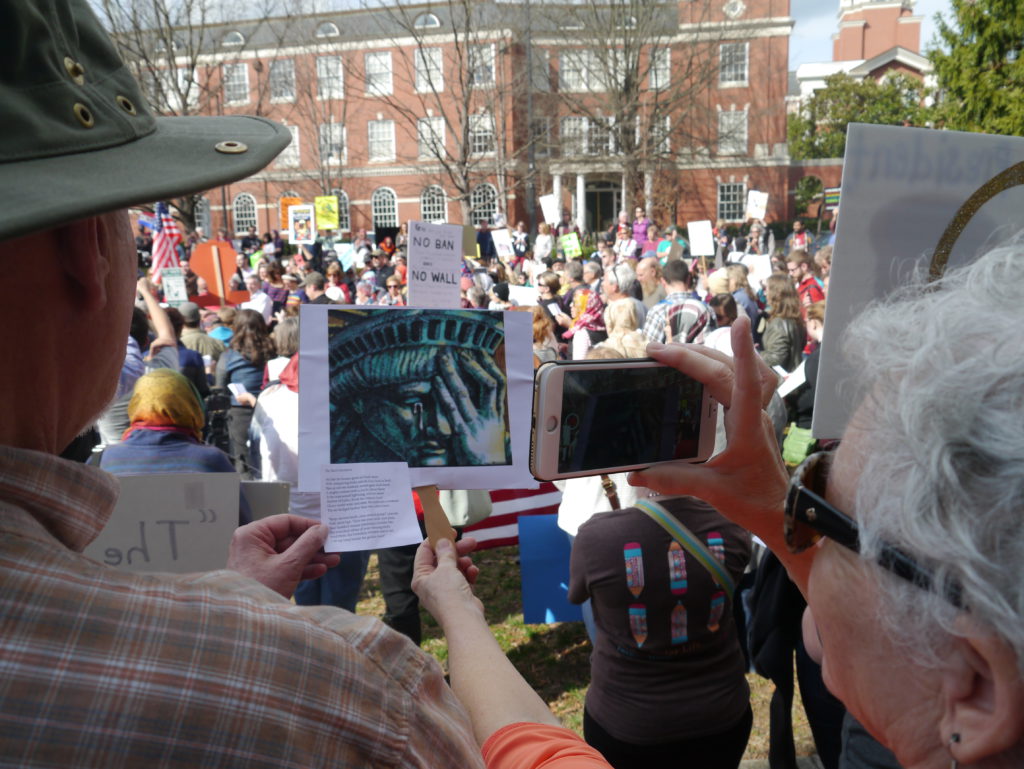 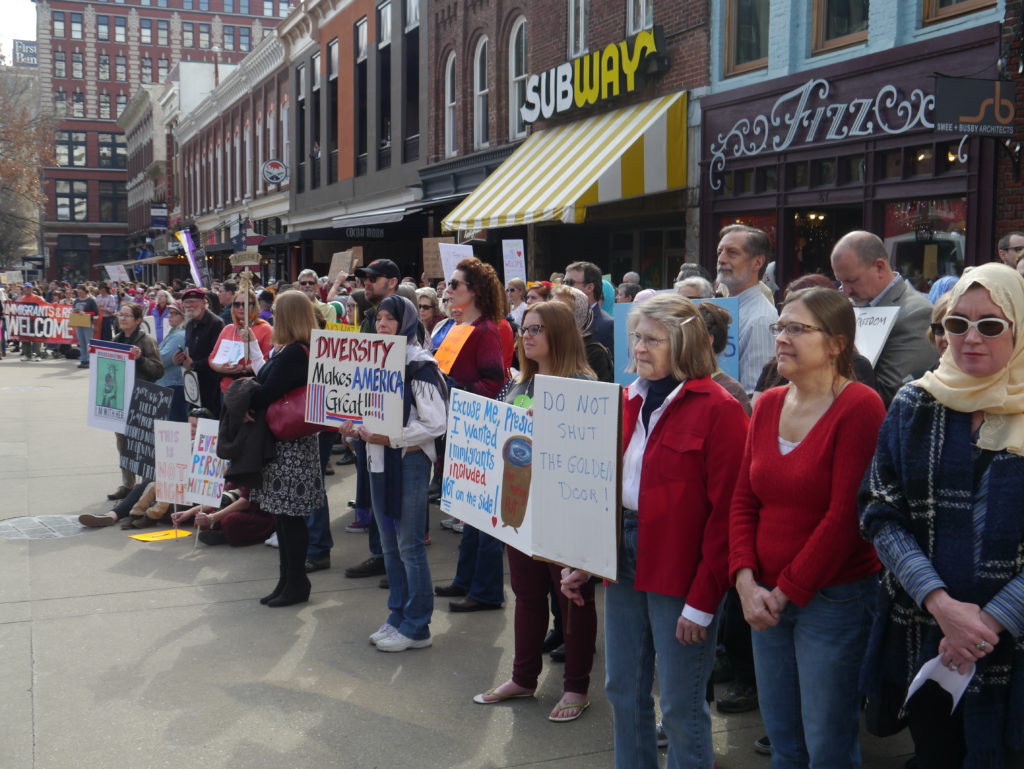 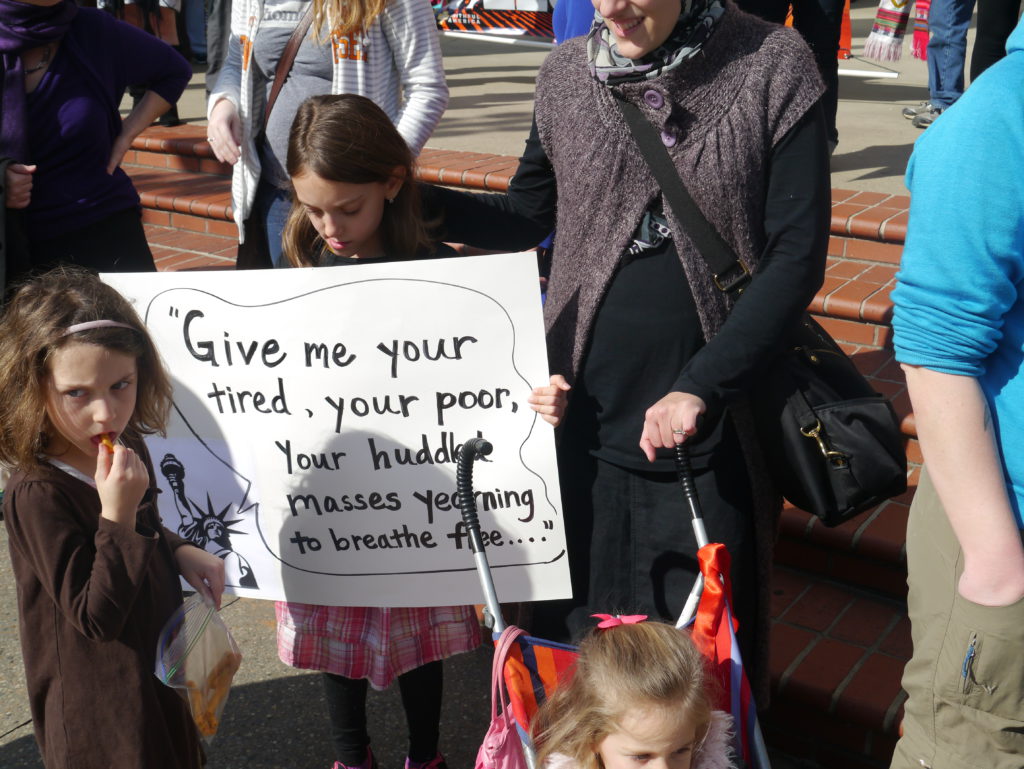 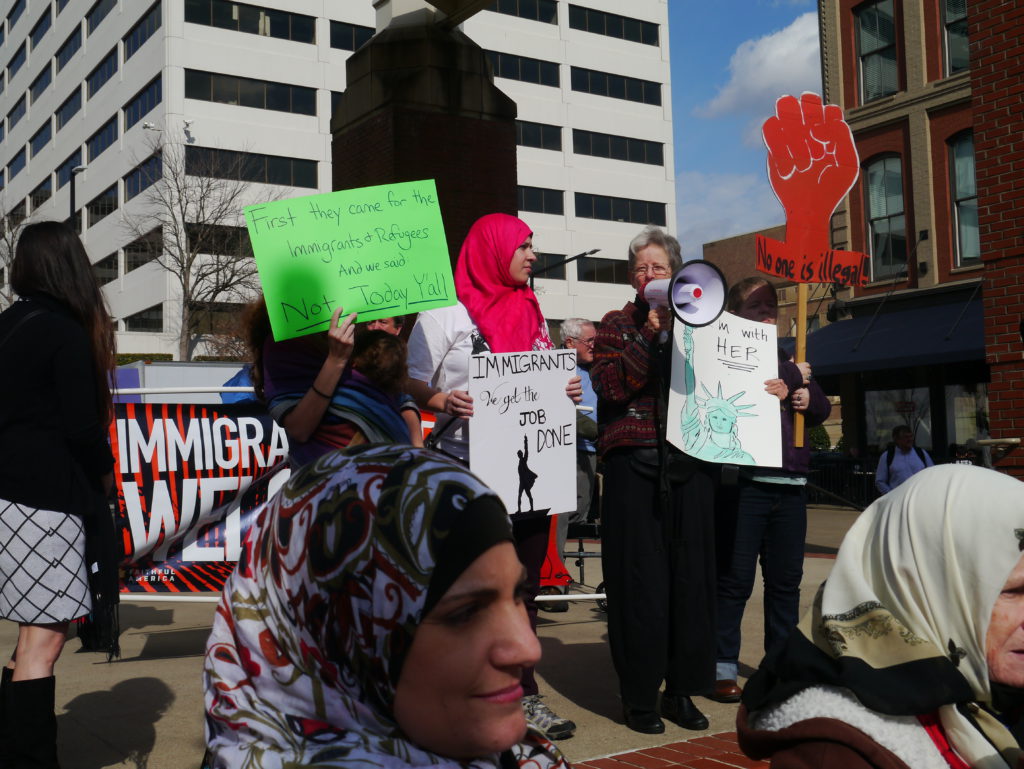