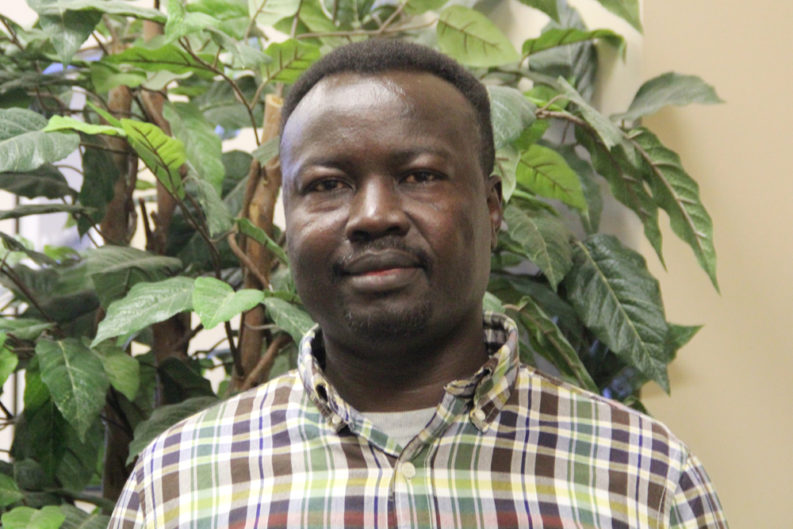 Idris Yasir’s description of his childhood is a blur of dodging and running. He is from the Nuba Mountains of Sudan, a region ethnically and culturally linked to neighboring South Sudan, which after many years of civil war broke away to form its own country in 2011. Inhabitants of the Nuba Mountains had been at the front lines of this conflict but were basically left behind when half the country gained its freedom. They remain ruled by the same Arab-dominated central government that has been charged with war crimes for its 2008 attacks on Darfur, in Western Sudan. The Nuba Mountains are so isolated by geography and war that international organizations have been unable to determine whether genocide is happening there, too.

Under the 28-year rule of President Omar Hassan al-Bashir, the Sudanese government has heavily bombed Nuba towns as it seeks to root out rebels who resist the discrimination, starvation, and Sharia law being imposed on the residents, who are a mix of Muslim, Christian, and traditional African faiths. Al-Bashir has claimed the rebels are being supplied by South Sudan, inciting young Sudanese Muslims to holy war against the South.

Amid the shooting and bombs, Yasir, his brother and two sisters were never able to go to school. When he was 12 or 13, the family fled to a packed refugee camp, periodically getting kicked out of it by the government and then returning. “I don’t even know how to tell you how hard it was,” he says through an interpreter.

They tried to escape through the mountains, failing once, but managed to get out over a different road and find sporadic work in other cities within their region of Sudan. Racism against blacks was extreme.

Yasir’s father and uncle encouraged him to leave when he was old enough, so he went to Egypt. Life wasn’t much better there. Yasir says he worked 16-hour days in a warehouse.

“You work all the time just to have enough to eat,” he says. “Sometimes they don’t pay you, and you have to be quiet or you get sent back (to Sudan).”

He married another Sudanese refugee and they had children, who attended a segregated school for refugees. But racism was so bad there, the kids could be attacked on the way to school, Yasir says. It was dangerous just to be in the street.

“If you take your family and sit in the park, some Egyptian would come and hit you because they know you aren’t from here,” Yasir says.

Yasir applied for refugee status with the U.N., a dangerous effort because of an agreement Egypt had with the Sudanese government. “If they knew I was trying to leave, they’d send me back to Sudan,” he says. Even so, he told U.N. officials, “I’ll go anywhere just to get out of Egypt.” He was told the process would take 10 years, and was shocked when he learned after three years that the U.S had accepted his family.

Yasir and his wife are settling into Knoxville with their four children, ages 3 through 11. He has been amazed that they were provided with an apartment, food, and furniture, as well as other help.

“It’s really different here,” he says. “Always there, you feel one day they will kill you. But here, you know you are safe.”

Yasir is working nights at a factory in Maryville, taking English classes, and making friends from both America and Sudan. A Sudanese refugee family that had arrived earlier cooked for his family on their first day in Knoxville and helped Yasir find his job.

However, Yasir has no car and relies on a friend for a ride to work. His friend got sick and quit his job at the same factory. “Right now I’m worrying,” Yasir says. “If my friend stops driving me, I lose my job.”

Yasir’s short-term goal is to get a car, but in the long run, he wants himself and his children to earn college degrees. “I always say, because this country support you, you want to work for a good future to help this country too.”

Meet Some of Knoxville’s Refugees: