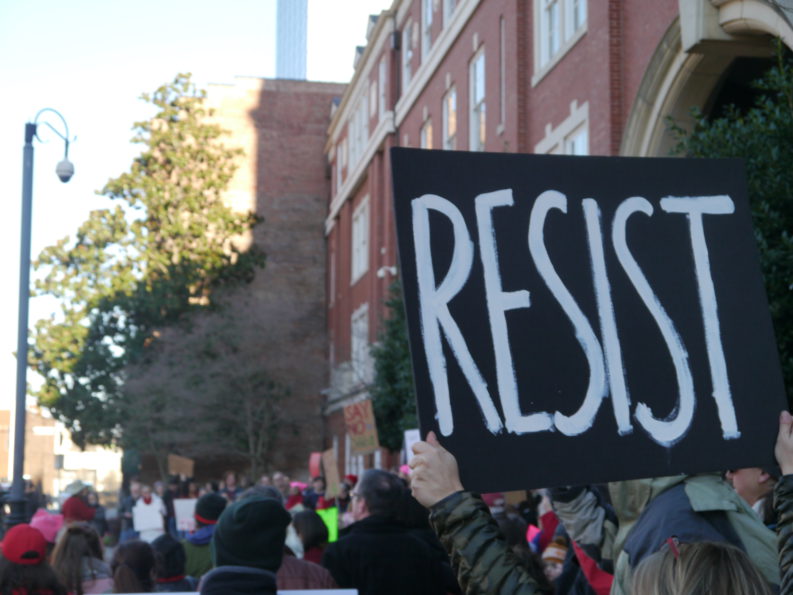 Activists on Monday kept up their pressure on U.S. Sen. Lamar Alexander to withdraw his support for U.S. education secretary nominee Betsy DeVos.

The late-afternoon protest in downtown Knoxville came about a week after Alexander publicly stated his support for DeVos, a wealthy GOP donor and proponent of charter schools and the redirection of public funding to private schools. His Facebook post generated more than 7,000 comments, the vast majority opposing the nominee.

At least 200 people brandished signs and chanted outside the Howard H. Baker Courthouse on Market Street. New arrivals were met with cheers from the crowd. One man drew cries of appreciation as he arrived in a kilt despite the late-afternoon cold. Many protesters wore red to reflect the slogan “Red for Ed (Education),” as called for by a loose coalition of organizers, largely via Facebook. City and federal police monitored the peaceful protest without apparent incident, though a reporter was admonished to stay off the mulch of the landscaped courthouse entrance.

Some protesters, galvanized by protests against the policies of President Donald Trump that have erupted since his inauguration, used the occasion to call attention to other issues, including the nominee of Scott Pruitt to head the Environmental Protection Agency and Trump’s executive order forbidding entry to citizens of seven predominantly Muslim nations.

But Devos was the main order of the day.

Sharon Clemmenson, whose husband is an intern at Bearden High School, came to the protest with her dog Milo. She is concerned DeVos would focus on a redirection of money to private and parochial schools from public systems.

She says she is met only with busy signals when she tries to telephone Alexander’s local and national offices. Alexander, a Republican from Maryville, is chairman of the Senate education committee.

“The (Sen. Bob) Corker staffer was pretty nice,” she says. “She seemed a little overwhelmed.”

Jay Carter says, “I just don’t think Betsy DeVos is qualified for the position,” noting she hadn’t attended a protest in a long time.

“It seems like a lot of energy. I hope he hears us.” 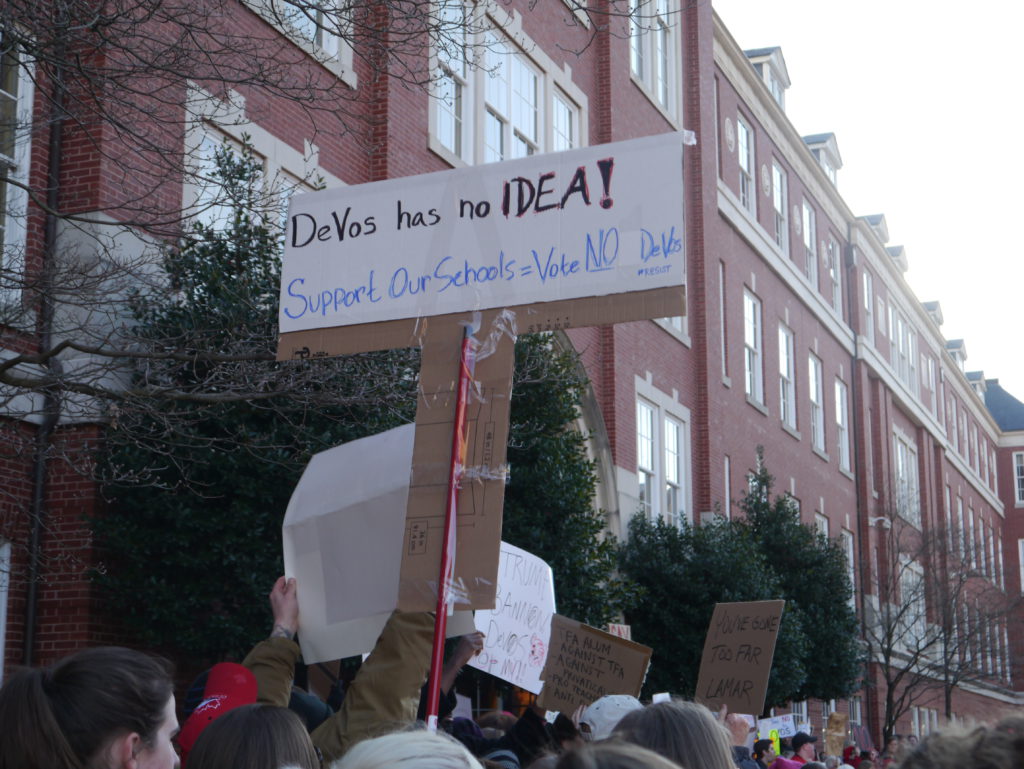 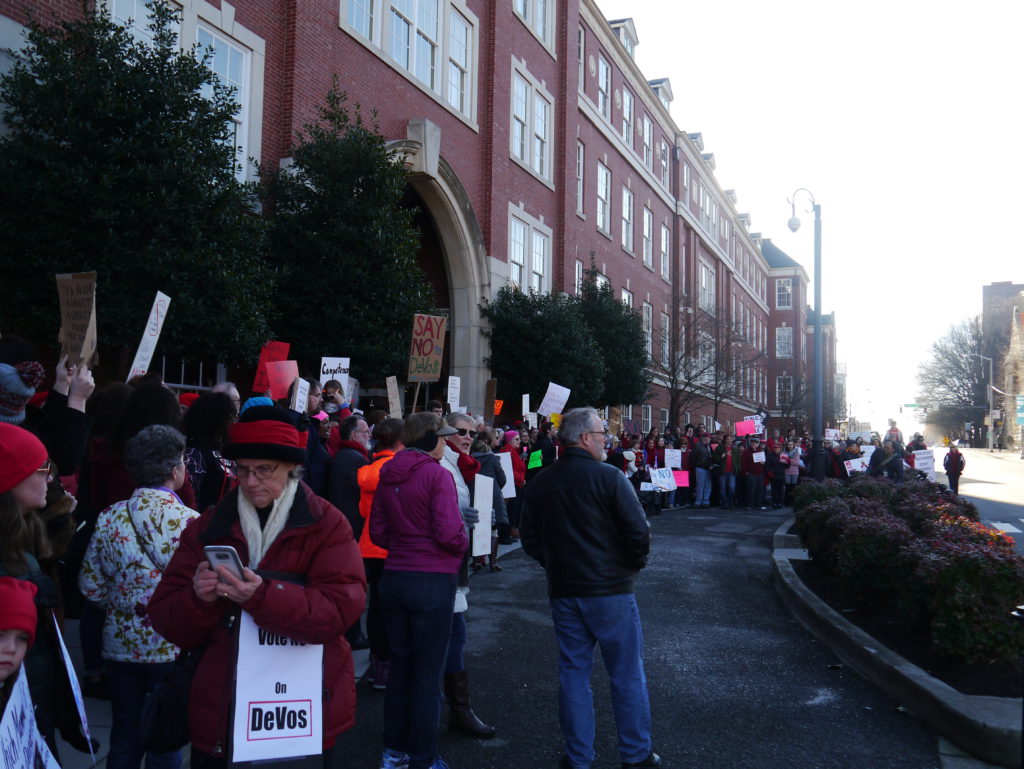 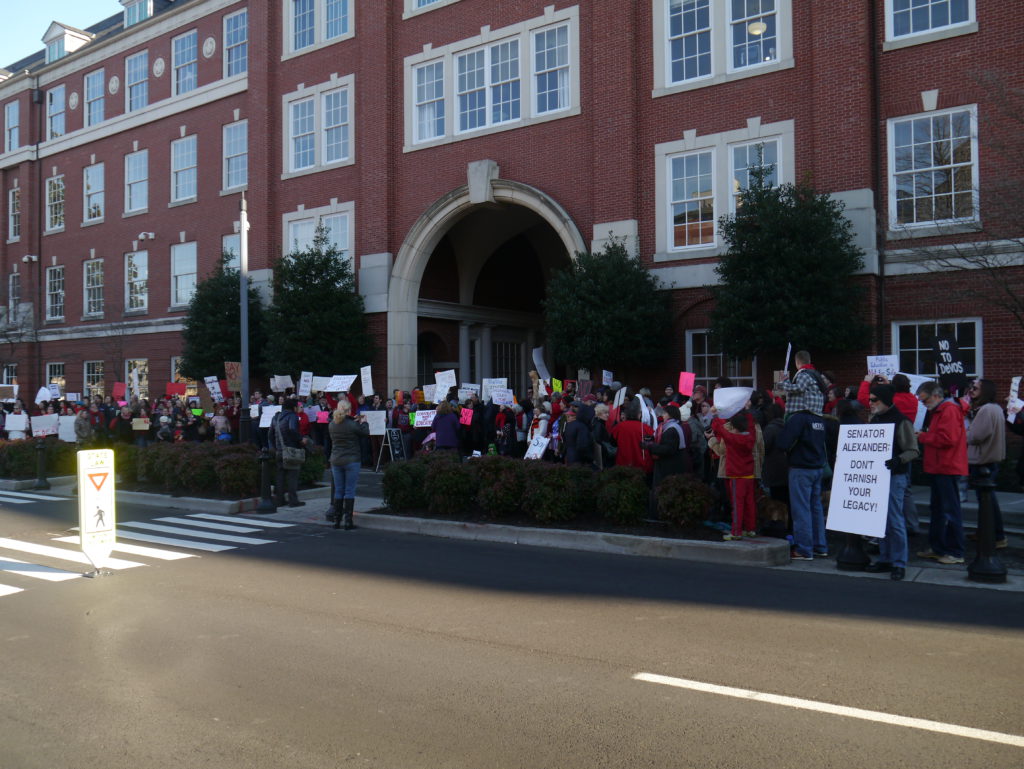 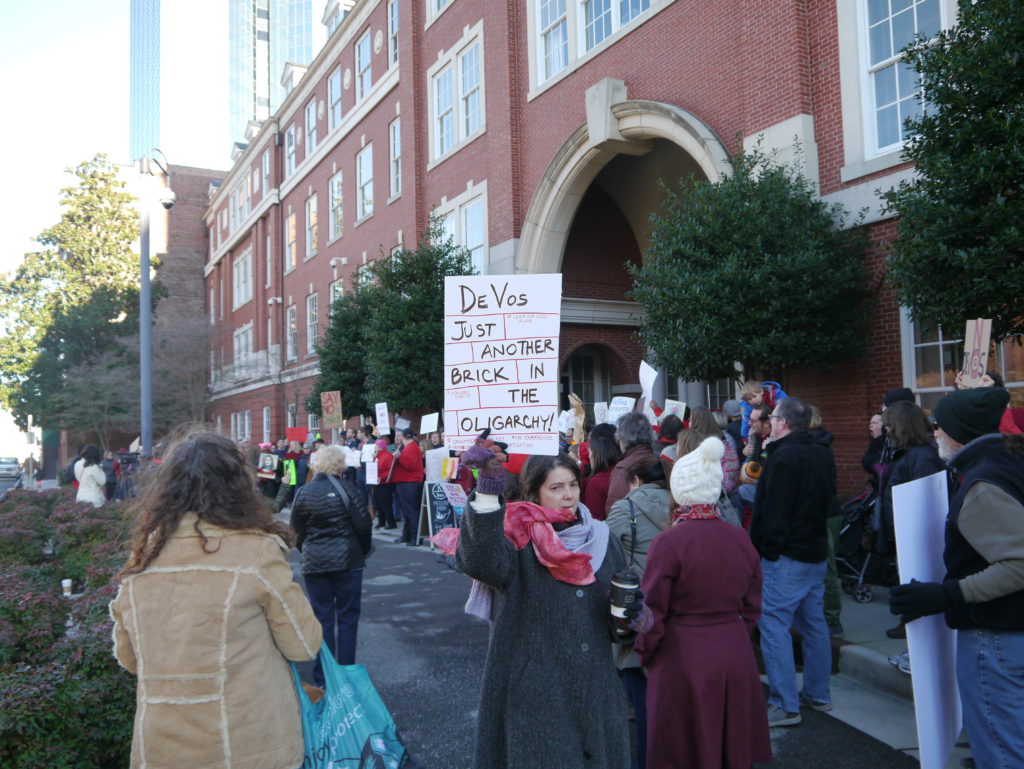 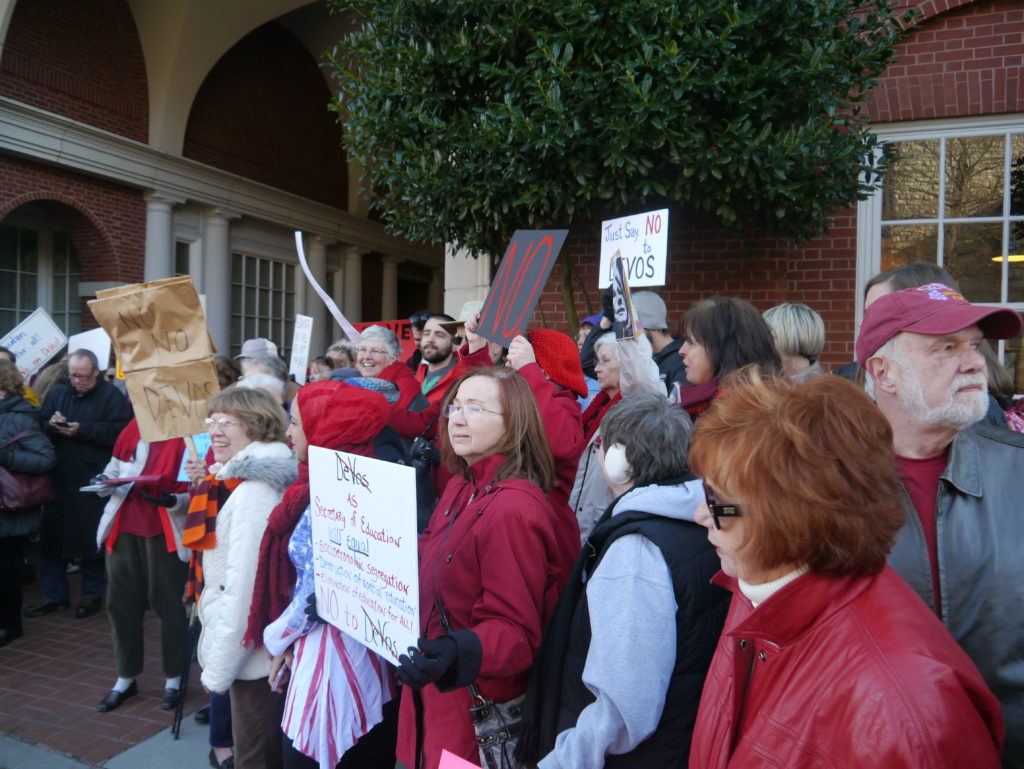 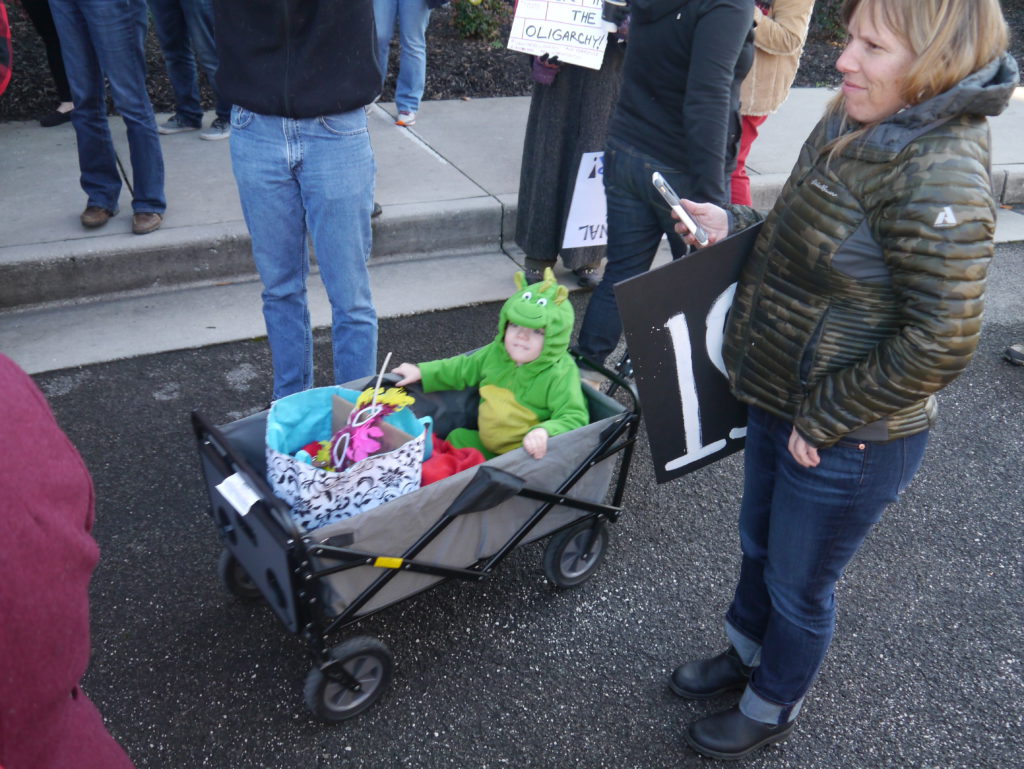 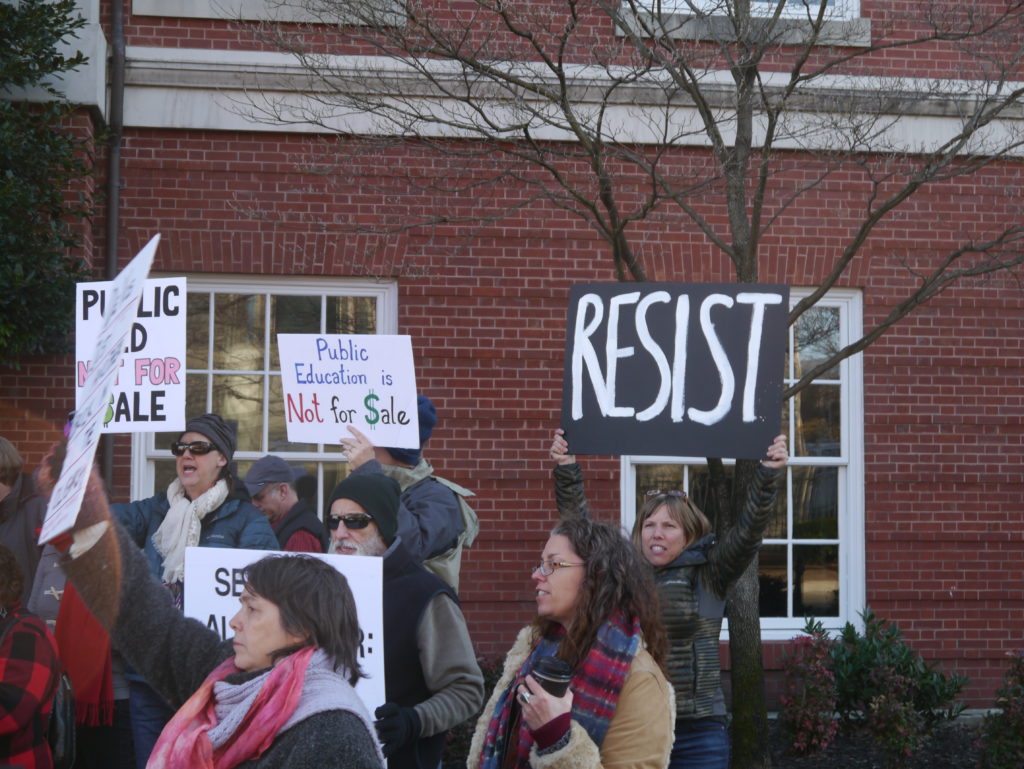