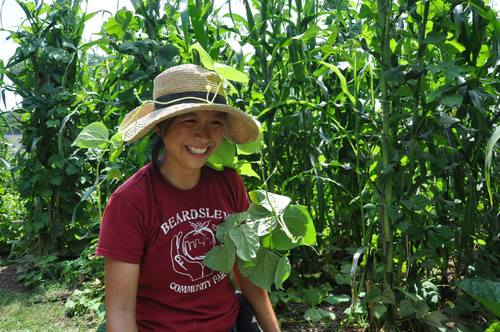 Chov checked in to promote the organization’s 9th annual Snow Day public fundraiser, held Jan. 27,  7 p.m.-1 a.m. at Barley’s Taproom and Pizzeria in the Old City. Funding from the event along with the efforts of more than 1,000 volunteers annually allows the urban demonstration farm to grow more than 100 varieties of fruits and vegetables in six acres of Malcolm Martin Park.

Do you need or want snow for Snow Day?
I would like for it to snow the Sunday after the Snow Day event, so Knoxville can have more Snow Days, and a long happy weekend.

What’s an important thing you’ve learned in your years of organizing the fundraiser?
I have learned the power of asking and I’ve learned about the incredible giving spirit of this community. Barley’s is a gracious host, nearly 100 businesses have donated silent auction prizes, hundreds of attendees come celebrate, and about 40 volunteers will help run the show. In addition, 17 musicians from seven bands will donate their time and perform.

Are there things you’ve learned to do differently?
We have worked to improve the event such as adjusting the flow of the space for crowd control, adding the option to purchase online tickets in advance, and accepting credit and debit cards at the door.  We added a photo booth around year five and a fun Beard Pageant in year three. This year, the Marble City Whiskers Society are helping us host the pageant and there will be six total categories: Mustache (with or without styling aids); Partial Beard (chops, whaler, goatee); Full Beard Natural Under 6″ (from bottom lip); Full Beard Natural Over 6″ (from bottom lip); Freestyle Beard (styling aids allowed, make it crazy!); Homemade Beard (mainly for the ladies and the whiskerless males).

Are any particular aspects of the fundraising more important than they have been in the past?
All proceeds from the event go directly towards CAC Beardsley Community Farm’s operating budget. This includes everything from utilities and various repairs to printer ink, seeds, soil, mulch, and chicken feed. Snow Day is CAC Beardsley Community’s largest fundraiser and raises about 10 percent of our operating budget. Its success is always essential for the operations of the farm, but with the addition of our new Education Center at Beardsley, our operations are different and larger. We are still feeling out these new changes, which means there are expenses we aren’t accustomed to. That makes fundraising  even more important this year.

What’s the most fun you’ve had at the farm this year?
Last spring, we grafted heirloom tomatoes–aka tomato surgery. We grafted heirloom varieties to a disease-resistant tomato root stalk. It was so different from anything we have tried to do, and a fun experiment.

We also had a successful “Beardsley Farm Block Party.” We partnered with Kick Stand to give away more than 30 bicycles to children who live next door to the farm at Ridgbrook Apartments. We were overjoyed to see the faces of kids receiving bicycles and to see them riding on the greenway in Malcolm Martin Park throughout the year.

What’s been your favorite soup from a soup-off of the past?
I have loved almost every soup I have tried, but one does stand out to me. In 2015, OliBea made a Creamed Celeriac Soup with Charred Scallion Gremolata.  I love allium vegetables and smoky flavors. As for what the supporters liked best, last year Tupelo Honey won with their cauliflower soup. Savory and Sweet Truck ‘s Winter Tikka Masala Soup was a very close second by only nine votes.

This year’s soup contestants are: the SunSpot, the Bistro, Lonesome Dove Western, Bistro, Cru, Tootsie Truck, OliBea, and Holly’s Corner. One new thing is that we will have a best vegan soup and best vegetarian soup. As always, all soups will be required to use at least one local ingredient grown within 100 miles of here.

Can you quickly update us on Beardsley projects?
The Beardsley Farmers have settled into the new CAC Beardsley Education Center which features many examples of sustainability such as a solar ready roof, rainwater catchment tanks, regionally-sourced clay bricks, locally- sourced bamboo, thermal-insulated masonry construction and an observation beehive.

One goal is to begin adding cooking demonstrations at the center this year. Not knowing how to prepare simple meals with fresh produce is one barrier to food access and we are excited for this new opportunity to help people.

We are in the process of applying for LEED certification for the Beardsley Farm shelter. This past fall the University of Tennessee School of Architecture and Elizabeth Eason Architecture were honored to receive three awards from the American Institute of Architects East Tennessee Chapter: an honor award for excellence, a People’s choice award, and an Architect’s choice award.

This past fall, we received a City Challenge grant to add a new water fountain with water bottle refill in partnership with the Tennessee Clean Water Network.

What are three simple ways people in this area can help advance Beardsley’s goals in our own communities?
1. Get kids excited about vegetables–eating them and growing them.

How Much:
$8 general admission with soup in advance; at the door $8 admission plus $5 for soup. Buy tickets here.

Snow Day features performances from seven area groups, a soup contest pitting area restaurants against each other, a Homegrown and Homemade Beard Pageant and a silent auction.