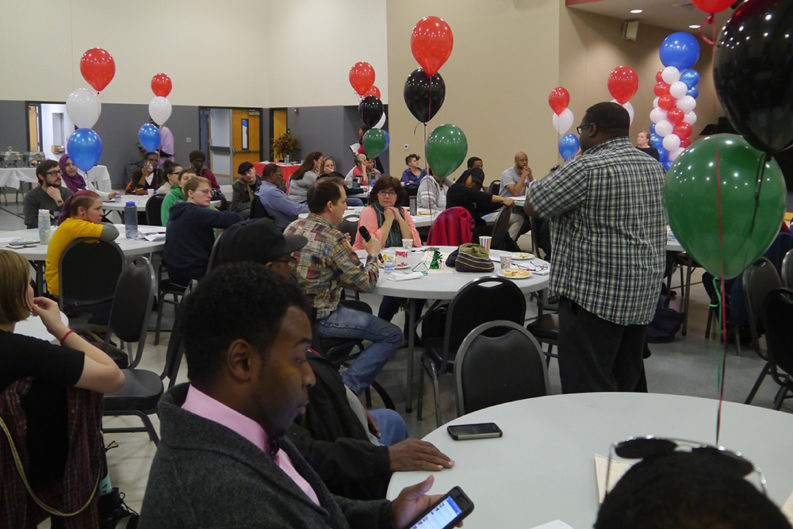 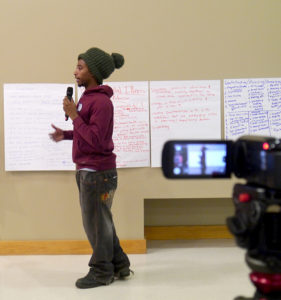 Knoxville progressives and minorities hope five is the magic number as local political machines gear up to replace term-limited members of Knoxville City Council in November. Some also see an opportunity to build a more liberal Council as a bulwark against a new presidential administration they fear could be hostile to human rights.

About 105 citizens of multiple backgrounds, representing interests ranging from organized labor to environmental protection and reproductive rights, attended the People’s Assembly at Mount Calvary Baptist Church in East Knoxville on Saturday. The intent was to lay the groundwork for selecting five candidates in five districts who would work in tandem to win the seats.

“This is not hyperbole. This is not pie in the sky,” Amaja Abdulahab, a People’s Assembly member and an organizer of the event, told the crowd.

The People’s Assembly has its roots in the Knoxville Rescue and Restoration caucus focused on giving voices to minorities and the disenfranchised. The caucus, led in part by Zimbabwe Matavou, head of the Knoxville Black Contractor’s Association, has gained steam in recent months with input at Knoxville Community Development Corporation meetings, public housing meetings, and, most recently, opposition to the city’s Magnolia corridor improvement plan.

“What we’re gonna do is look at how we can get five people to run for City Council as a team … understanding how the budget works … understand what their job is as a City Council person, how to manage,” Abdulahab says. “And also to put together a cabinet, people who they work with to make decisions about getting things done in their district. That’s vitally important, so they’re not left out there by themselves.”

Assembly members spent the morning articulating a familiar list of common grievances in minority and working-class communities, including stagnant incomes, poor relationships with law enforcement, and a lack of economic opportunity and health-care services.

The People’s Assembly Facebook page billed the event as a way to stave off “a Trump presidency that promises to attack the civil and human rights of people of color, working class people, and marginalized folks of many backgrounds.”

The event was planned long before the election of President Donald Trump, Abdulahab says. “It’s an ongoing effort of citizens who are underrepresented, or not represented at all, working toward getting representation,” he says.

Five people have announced they are seeking seats or have appointed a treasurer and begun the requisite paperwork to appear on the Aug. 29 primary and Nov. 7 general election ballots: Lauren Rider, Harry Tindell, David Williams, David Gillette, and Thomas “Greg” Knox. Petitions required to officially appear on the ballot can be picked up beginning Feb. 17. They have until May 18 to qualify.

Rider, a North Knoxville neighborhood organizer, is seeking the 4th District seat, as is Harry Tindell, a former member of the Knox County school board who served for 22 years as 13th District state representative. The Council seat is occupied now by Nick Della Volpe. He and four other Council incumbents can’t run again because term limits restrict service to two consecutive four-year terms. Williams is seeking the 2nd District seat; Knox intends to run in the 1st District. Mayor Madeline Rogero is also term-limited and her tenure will end in December 2019.

Gillette, a Mechanicsville native, will run in the 6th District, now occupied by Brown. Gillette told those at Calvary his slogan is “trust, leadership, and commitment.”

The field could expand greatly before candidates pick up their formal nominating petitions. Primary voting will be restricted to district residents; the top two vote-getters advance from there to the general election open to all city voters.

East Knoxville activist André Canty told the crowd that he had not yet made up his mind, but “social justice has always been my lens.” Others say they were mulling a decision. But they were reminded that running for office is not an easy task.

It can be expensive, and daunting, warned Kazi Wilkins, a former Statewide Organizing for Community Empowerment organizer who is now a community-level independent political advisor.

“Campaigning can be very difficult,” she said, adding that Saturday was a good first step. “You are already doing the work to prepare yourself.”