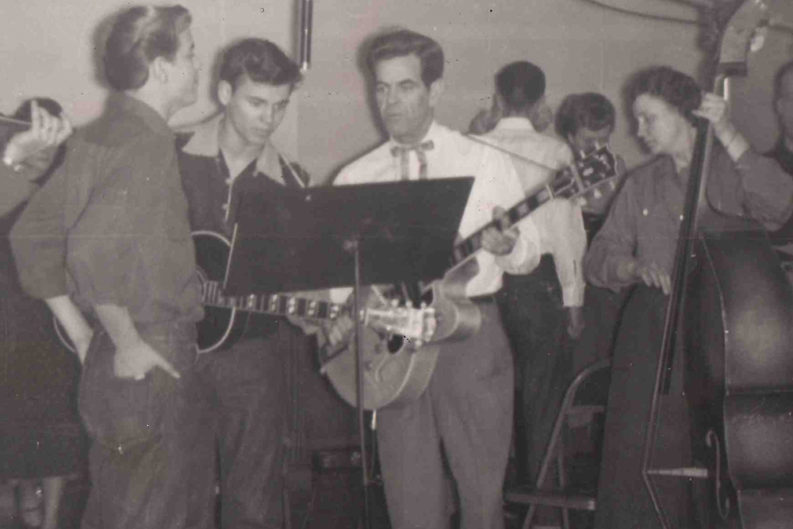 Don and Phil Everly were known for their perfect brother harmonies, but made a global impact on popular music by taking chances with combining their old-time harmonies with a new form called rock ’n’ roll. Their influence on later bands like Simon and Garfunkel and the Beatles was profound. John Lennon and Paul McCartney admitted they got into music partly by way of imitating the Everlys. The early Beatles were compared to the Everlys so often that the English group joked they should be called the Four Everly Brothers. (Foreverly—get it?)

They were not exactly from Knoxville. Elder brother Don was born in Muhlenberg County, in western Kentucky. Phil was born two years later in Chicago. They grew up mostly in Shenandoah, Iowa, singing with their parents in a family act. It was in Nashville that they became famous as successful recording artists.

They lived in Knoxville just a couple of years, ca. 1953-1955. Although they made semi-regular appearances playing on WROL radio shows, they were rarely mentioned in the papers except as West High athletes. However, their Knoxville years marked a critical turning point in their career. It was in Knoxville that the brothers began performing as a duo. It was here that they discovered rock’n’roll, by way of new Bo Diddley records encountered at “Dougout Doug’s” record store, on Cumberland Avenue near 17th Street. And it was here that they met former Knoxvillian Chet Atkins, who encouraged them and guided their early career.

Most of their hits were written by Felice and Boudleaux Bryant, a songwriting team in Nashville who wrote “Love Hurts,” “All I Have to Do is Dream,” “Bye Bye Love,” “Wake Up Little Susie,” “Problems,” and “Bird Dog,” all songs popularized by the Everlys. Coincidentally, the Bryants later moved to Gatlinburg, where they wrote a very different song called “Rocky Top.”

However, the brothers wrote some of their own songs, including “(Till) I Kissed You,” “When Will I Be Loved” and their biggest American hit, “Cathy’s Clown,” which is known to be loosely based on a relationship one of the brothers had at West High.

Two of their hits, “All I Have to Do is Dream” and “Wake Up Little Susie,” rose to Number One on the pop, country, and R&B charts, an extraordinary feat.

Surprisingly, though they sometimes remarked that they considered Knoxville home, they rarely performed in the area. Their biggest Knoxville show may have been in 1998, when they performed a sellout show at the Tennessee Theatre. That show celebrated the launch of the then-new Cradle of Country Music Tour, which marked the site of their first radio broadcasts, at the Mechanics Bank Building at 612 South Gay Street. That self-guided tour brochure and its markers have recently been refurbished by Visit Knoxville.

They have recently become the subject of a new city project, Everly Brothers Park. The small “pocket park” will be at the corner of Kingston Pike and Forest Park Boulevard, and connected to the well-used Bearden Village Greenway. (Finally, Forest Park has a park!) The location is less than a mile from West High School, where Don graduated in 1955. For more, and to contribute to the still-developing project, see legacyparks.org.

Featured Image: Before Rock ’n’ Roll: The original Everly family, pictured here in March, 1954, performed on radio station WROL when it was located on the top floor of the Mechanics Bank building on Gay Street. Phil, barely 15 at the time, is at left. Don, 17, is on guitar. At right are father Ike Everly, on guitar, and mother, Margaret, on stand-up bass.