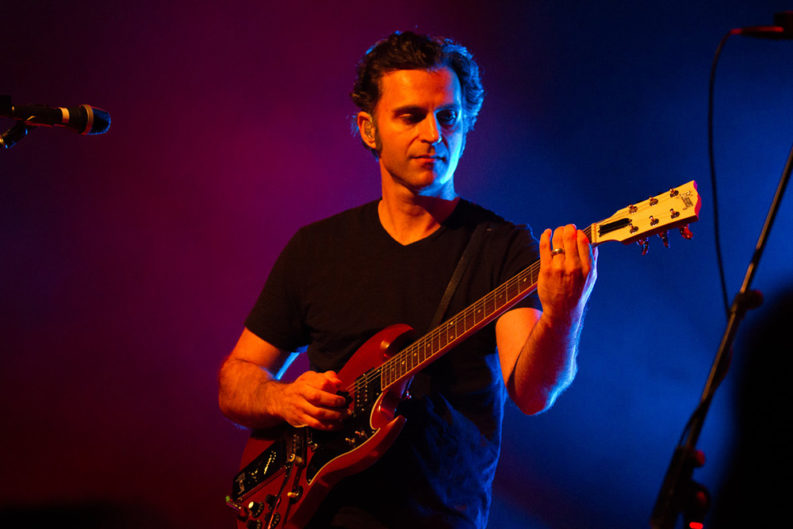 For more than a decade, Dweezil Zappa has revitalized his father’s music, joyously paying tribute to the near-manic eclecticism and complexity of the Frank Zappa catalog. But his latest tour is traveling beneath a storm cloud. Since the 2015 death of Dweezil’s mother, Gail, the Zappa family has split into two factions of feuding siblings: Dweezil and sister Moon Unit against Ahmet and Diva, chief shareholders of the Zappa Family Trust. The rival camps disagree about most matters of preserving Frank’s legacy, from an upcoming Alex Winter documentary about him to the branding of the Zappa name.

For Dweezil, the matter is even more complicated. Since 2006, the guitarist has toured the world as Zappa Plays Zappa, a logical name for a son extending his father’s music onstage. But Dweezil has twice been issued cease and desist letters from the trust, which was established after Frank’s 1993 death to protect his intellectual property.

As part of a trademark complaint, Dweezil was forced to change the name of his project for the latest trek, but he ultimately did so with an irreverent kiss-off his father may have admired. His current sojourn is called 50 Years of Frank: Dweezil Zappa Plays Whatever the Fuck He Wants – The Cease and Desist Tour. The trust followed by filing for a federal trademark for the surname Zappa, and Dweezil responded with a PledgeMusic campaign to help fund a legal battle to, in a bizarre sense, preserve his own name.

“One of the things they’ve applied for is everything in music and entertainment, so if they were to be able to control the name, they could block me from using my own last name to perform anywhere,” the guitarist says. “I’d need a license or some kind of permission. They’re trying to basically have their thumb over me for anything I ever do. I have to oppose this because it’s ridiculous, but it’s going to cost a ton of money to do it, and it’ll take months and months.

“Their intent and hope is to create Zappa as a brand, like Chanel or something. They want to put ‘Zappa’ on anything. The very first project Diva did was make yoga pants with the We’re Only in It for the Money album cover on it. She didn’t realize the irony of that choice. What’s so crazy is, listen to the lyrics of ‘Cosmik Debris.’ Does that sound like somebody who would want his face on yoga pants?”

Despite the numerous distractions, Zappa is refocusing his attention away from family drama toward the songs that altered his life’s course.

Like the previous 50 Years dates, this two-leg North American tour covers music from Frank’s entire catalog, with a special focus on early albums like 1966’s Freak Out!

“The first 45 minutes is from early Mothers of Invention stuff that we haven’t played on any other tour,” Dweezil says. “It has a certain energy that’s different from other areas of Frank’s music. It’s always been the goal for me to present what I feel are the most underappreciated or misunderstood or least well-represented parts of his career. The issue that occurs with Frank’s music is that he got on the radio sporadically, but not with songs that represented the mentality of his work.

“Some people say, ‘I’ve heard ‘Yellow Snow’ or ‘Valley Girl’ or whatever, yeah, I get it. I know Frank Zappa’s stuff.’ But they really don’t. My goal was to play the music but focus on the underappreciated elements of Frank’s talents as a composer.”

The harmonic and rhythmic sophistication of that music has rubbed off on Dweezil’s own solo material, which has evolved substantially from his early hard-rock electric guitar workouts. His latest album, 2015’s Via Zammata’, is highlighted by a shapeshifting, symphonic-sized prog-fusion jam called “Funky 15” that echoes—but never imitates—Frank’s peak mid-’70s period. Later this year, Dweezil will debut some music onstage with a 100-piece orchestra.

In the meantime, he is concentrating on his dad’s genius, cease and desist letters be damned.

“When we started in 2006, we had no idea if it would go on beyond that year,” Dweezil says. “There’s enough music to explore to keep it going for decades, but the initial people who came out to see that were, at that time, mostly males in their late 50s and 60s. Fast-forward 10 years—we don’t see those exact same people. Demographically, people who are Frank’s core audience from back in the day, they aren’t going to so many shows anymore. Some of them might not even be alive anymore. That’s the importance of carrying the music forward to a new generation.”

Dweezil Zappa’s 50 Years of Frank: Dweezil Zappa Plays Whatever the Fuck He Wants – The Cease and Desist Tour plays at the Bijou Theatre on Tuesday, Jan. 17, at 8 p.m. Tickets are $30.