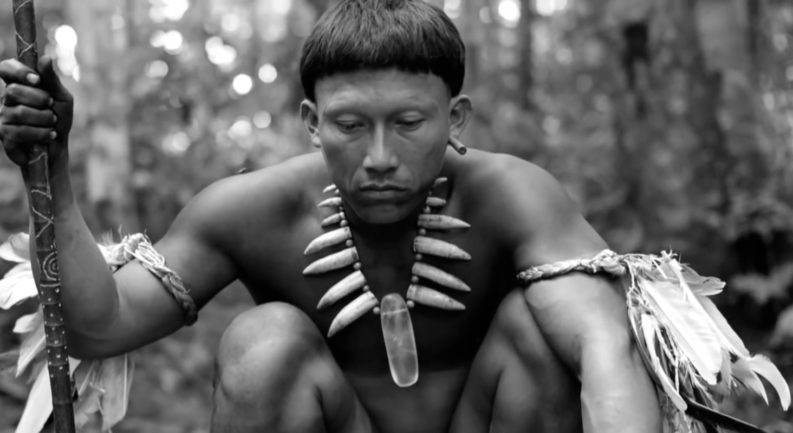 If you’re not up to facing the actual outdoors during these dark winter days, I’ve made a short list of viable movies that will make you feel as if you’ve been outdoors. I’ve left off beloved movies that many already know about: A River Runs Through It, Into the Wild, Wild, Cast Away, and yes, Deliverance. Instead, I’m focusing on some maybe lesser-known feature films (not documentaries) that may provoke you into thinking about nature and the wilderness in different ways.

Director Ciro Guerra intertwines two Amazonian narratives: one set at the turn of the 20th century, about a dying German ethnologist in search of yokruna, a rare curative plant; and the other narrative, set 40 years later, in which an American botanist seeks the plant for more dubious reasons. Each white man is led upriver in a dugout canoe by the same shaman, Karamate, the lone survivor of the Cohiuano people. It’s difficult to isolate one emblematic segment of the movie since the setting is so intertwined into each quest, but there is one scene about halfway through that illustrates the film’s magnificent scale, profundity, and economic storytelling.

Karamate and Manduka (friend and guide of Theo the German) are dragging the canoe around an impassable section of whitewater. Theo stumbles along behind them, loaded down with his boxes. Karamate says, “Leave all that. They’re just things.” Theo, gasping, says he cannot because the boxes contain the knowledge he’s gained in the jungle, that without these things, no one in Germany would believe him. Contemplating the river’s turbulence nearby is Manduka, his back deeply scarred. Karamate remarks correctly that the rubber barons did this to him. Manduka nods, turns back to the river, and says, “Is this the spot where the anaconda descended from the Milky Way, carrying our Karipulakena ancestors?” Looking over Manduka’s scarred shoulder at the powerful churning river, you can believe it is true, that this is the perfect spot for an origin myth.

This is one of those rare films that manages to encompass so much—the cultural devastation of colonialism, the degradation of the environment, an inquiry into nature and spirituality—with deft and concise strokes. Its grandiose scope is managed so impeccably that the characters stand out in sharp relief, flawed and dynamic and dignified like the landscape that envelopes them.

People do horrible things to each other in Terence Malik’s film (based on the James Jones novel) about the American invasion of Guadalcanal in World War II. But as a matrix for the horror, the island’s landscape is so vibrant that the characters—in the midst of dodging bullets—stop to consider the tall, undulating fields of grass where they cower and the strange plants that close up when touched by humans.

The movie begins with smiling Pvt. Witt paddling a dugout canoe across a bay of turquoise water, and then frolicking underwater with native (Melanesian) children. Soon enough, Witt, who happens to be AWOL, is back in the dark chaos of battle. It’s tempting to sum up the film as an indictment of industrialized warfare and its power to destroy Edenic places and cultures. That’s there, I think, but the film is most intriguing when nature comes to the foreground as a powerful force separate from human folly. A group of bats, hanging upside down, stare at Witt and his dying friend, who lie in a shallow stream awaiting a Japanese battalion. Later, an iguana stares down at a soldier in the same detached way. Often, bolts of sunlight shine through the tropical flora, piercing smoke and fog, as if to shed light on the absurdity below.

Directed and written by Courtney Hunt, this is a tightly focused story about crossing borders and overcoming barriers. Set in upstate New York near the Canadian border, its main character, Ray Eddy, a single mother played by Melissa Leo, is struggling to scrape together enough money to buy a new double-wide trailer. She’s so desperate that she forms an uneasy confederacy with a Mohawk woman, Lila Littlewolf, also a single mother, to smuggle illegal aliens in the trunk of her car across the frozen St. Lawrence River. This may be the most understated and unsentimental movie of all time, the snow and ice establishing the film’s hard, brittle tone. Still, by the end, it might make you cry. The last trip across the river, in the middle of a blizzard, is fraught with bad decisions, dire consequences, and quiet heroism. It’s a story of desperation and risk, and the landscape raises the stakes.

Tough and brilliant Los Angeles detective Will Dormer (Al Pacino) is summoned to Nightmute, Alaska to help solve a murder case. At a fishing cabin stakeout for the suspected killer (Robin Williams), Dormer drops through a trap door into an old mining tunnel in pursuit. Thick fog whites out distinctions between pursued and pursuers as the streetwise city cop stumbles across the rocky terrain and fires an ill-advised round. Dormer battles a decline in professionalism and confidence, and his insomnia provokes hallucinations that obscure reality in this bleakly beautiful landscape.

Director Christopher Nolan tells the suspenseful story as if we’re right there with Dormer, fumbling our way through the fog and icy water, gulls mocking from above.

Based upon Robyn Davidson’s nonfiction book on her 1,700-mile trek, this came out a little before Wild, and I think it’s better, though I loved Cheryl Strayed’s book about hiking the Pacific Coast Trail and the film with Reese Witherspoon. Tracks is set in a more challenging landscape in terms of storytelling and cinematography: the Australian desert. You might think, at first, that a journey across the desert would be boring sameness and monotony, wind and dust and flies. Those things are there, on the surface. The longer you accompany Davidson (played by Mia Wasikowska), the more the landscape’s personality emerges: terrain, animals, people begin to stand out in stark relief. Canyons, bare trees, a stream with white birds, kangaroos, an Aborigine village, a cistern of water, the intermittent appearance of National Geographic photographer Rick Smolen (Adam Driver), and finally the Indian Ocean are just a few of the highlights we dwell upon.

Director John Curran’s vision captures the difficulty of Davidson’s undertaking, including her arduous preparation for the journey, which included obtaining and training feral camels to carry her supplies. By the end, after many trials, some heartbreaking, you marvel not only at “the camel lady’s” toughness, but also her insight; and like her, you’ll be mesmerized by the landscape, the “hard country” as one of the Aussie characters calls it. Aside from that, this movie will warm you up on a cold day.