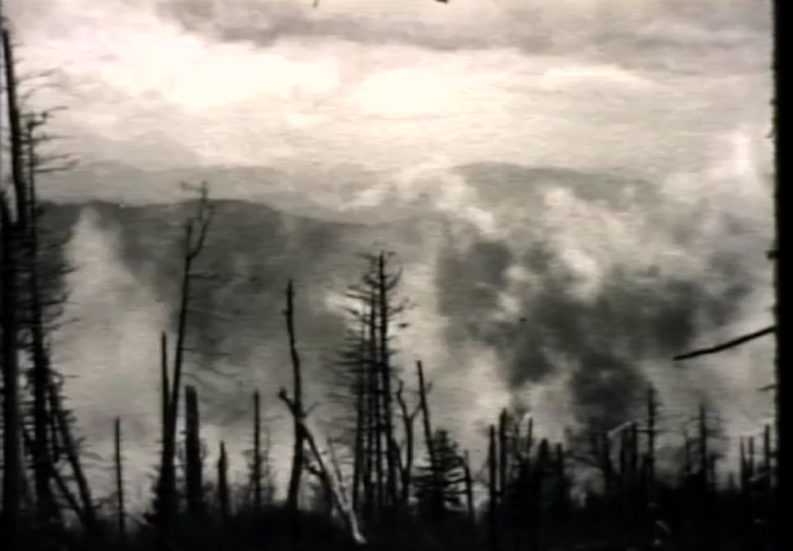 Along with Christmas and trips to the beach, films of the Smoky Mountains and Gatlinburg are probably the most common footage found in the Tennessee Archive of Moving Image and Sound’s home-movie collections. From the time 16mm cameras became affordable for the more well-heeled amateur filmmaker, holidays and vacations were some of the most well-documented events. This continued with the advent of the less expensive 8mm in the early 1930s and Super 8 in the mid 1960s, formats which made home movies more attractive to middle-class families.

Film use began to dwindle in the 1980s, following the appearance of video camcorders, and now that people can make movies on their phone, even few Hollywood filmmakers shoot on film. (Notice, though, how often people refer to shooting video as “filming.”) What hasn’t changed much over the last century are the subjects of home movies. Vacations remain a favorite subject, and around here, Gatlinburg and the Smoky Mountains are natural destinations. Home movies at TAMIS offer a unique look at how the Smokies and Gatlinburg changed throughout the 20th century.

Local photographer Jim Thompson shot quite a bit of 16mm film, much of it in the Smokies. A founding member of the Smoky Mountain Hiking Club, Thompson loved photographing the mountains, and his images were instrumental in promoting the creation of the Great Smoky Mountain National Park. His black-and-white 1920s footage of the hiking club, Cades Cove, and the balds and ranges of what would become the park remain some of the most striking moving images of the Smokies.

Gatlinburg resident Jack Huff was also a Smokies enthusiast and booster who enjoyed filming around his home. Huff’s film collection is a large one—more than 70 reels of 16mm film, mostly of Gatlinburg and the Smokies. He filmed the earliest known color film in the Smokies, images from 1929 that include views of a snow-covered Mount LeConte Lodge, which he operated from 1926 to 1959. You think of Thompson and Huff hauling cameras and film reels up those mountains, and how difficult that must have been, but then remember that Huff carried his mother up LeConte strapped to his back in a wicker chair.

The Arrowmont School of Arts and Crafts collection contains fascinating 16mm footage of Gatlinburg from the late 1920s, before it began its development as a tourist town. A 16mm camera inside a car filmed the entry into Gatlinburg (the hood ornament is visible throughout the shot), with just a few cafes, shops, and gas stations visible along the side of the road. The photographer filmed the grounds of Arrowmont and Pi Beta Phi Settlement School, along with the students and several Sevier County elders. A retreat to higher ground reveals expansive views of the small town and surrounding mountains. The Mountain View hotel looms large, but otherwise a few homes and churches are about all you can make out.

Though usually not as aesthetically pleasing as 16mm, 8mm film is more plentiful, allowing a broader view of the area. Vistas are understandably popular places to film, and pans of distant mountains from peaks or lookouts are very common. In almost every Smokies home-movie collection you’ll also find shots of black bears, first-person shots of cars entering tunnels, and the Newfound Gap monument. You know it’s coming, but it never gets old. It’s the same subjects over and over, but each shot and perspective is unique.

There are frequent uncomfortable moments, too. Obviously the tourist boom was a boon to the local economy, but it’s still okay to feel a bit of a pang when watching motels, restaurants, and trinket shops replace bucolic landscapes. For obvious reasons, it’s difficult to watch white—invariably white—tourists interact with costumed Native Americans. One home movie lingers on a black bear chained to a platform, trained to drink bottles of Coke for bemused spectators. The film is from the 1960s, the damaged acetate giving it a beaten, cracked quality that makes the spectacle seem even more distant and surreal. But we’d do well to remember that not that long ago bears were still on display in cages or in chains in Pigeon Forge.

Like just about everything else in America, we have a complicated history with the Smokies and Gatlinburg, and the recent wildfires have added a further troubling incident. There is no shortage of photographs or video, especially digital video, documenting the area, but film will be increasingly harder to come by. Thousands of visitors must have filmed their vacations there across the five or six decades film was in regular use. But much of that film has deteriorated, or was unknowingly thrown out, or is sitting in a basement or attic awaiting such a fate.

Fortunately hundreds of film reels with images of the area are in a cold storage vault at TAMIS, much of it digitized and occasionally screened publicly. An hour of this footage was made available on Picturing the Smokies, a DVD assembled by TAMIS co-founders Bradley Reeves and Louisa Trott in 2009. Much of what’s described above can be found there, along with some surprises. We’re donating 100 percent of proceeds from sales of the DVD to the Pi Beta Phi Elementary PTA Student and Staff Fund. If you’d like to view this one-of-a-kind footage, you can purchase Picturing the Smokies for $20 at Lawson McGhee Library, the East Tennessee History Center, or online at knoxfriends.org.