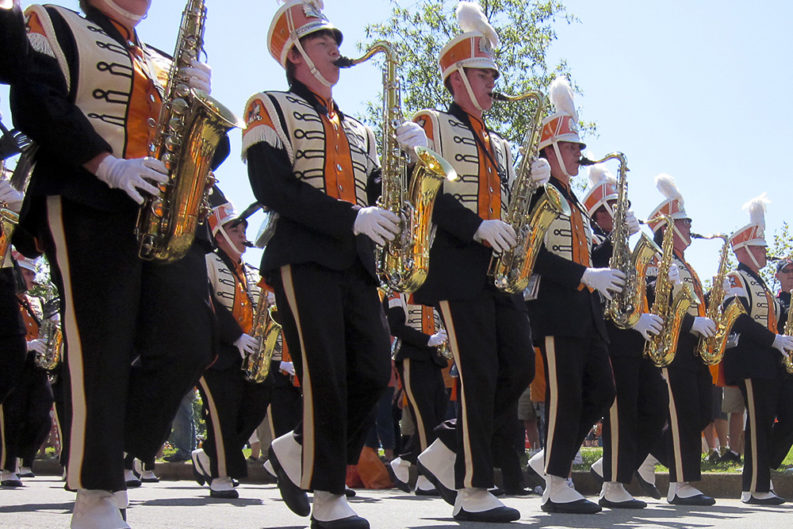 Just after the Civil War, what was then known as East Tennessee University was partly military in its focus. The college sponsored a tiny “cadet band,” perhaps not a very good one. When the university needed a band for its own commencement ceremonies, they hired a local town band. However, by 1876, the cadet band accompanied some university functions.

In 1879, the university, now called the University of Tennessee, hired a remarkable part-time music instructor. Originally from Leipzig, Germany, Gustavus Knabe (1817-1906) had once been a member of Felix Mendelssohn’s famous orchestra. Knabe—who probably pronounced his name like “Ka-nobbeh”—had served as a military musician for the Union army during the Civil War, and settled in Knoxville, where he founded a brass band of German immigrants and Knoxville’s first symphony orchestra. In 1871 he began working as a musical instructor at the university, training the cadet band and founding a “cornet band” in 1879.

At f irst, the university discouraged publ ic performances, refusing to let the band travel as far as Maryville for a show, insisting the musicians “needed every hour for their lessons.” However, by 1877, they were making regional concert tours. By the 1880s, Knabe’s band had grown to 15 members (one of whom was William Gibbs McAdoo, future U.S. Secretary of the Treasury!).

Several years after Prof. Knabe retired in 1887, another Knabe appeared. William Knabe, Gustavus’s son, was a UT graduate, a legal scholar who became a UT law-school instructor, a justice of the peace, and an elected representative who served for 20 years on Knox County Court, the county’s governing body. He was also a musician, and led a band for a Tennessee regiment in the Spanish-American War. In 1899, UT hired him to be the band master.

He trained the band’s 16 members, instituting daily practices (an hour every morning!) and a weekly “dress parade” every Wednesday at Wait Field, UT’s first on-campus football field, at the southeastern corner of Cumberland Avenue and what’s now Phillip Fulmer Way.

Knabe died suddenly at age 50 in 1914, succeeded by a series of directors who expanded the band to 85 members in the 1930s. By then, the band sometimes performed halftime shows at football games. After 1940, under “Major” Walter Ryba—a former member of the band of John Philip Sousa, America’s most famous military band—promoted the growth of the band to almost 100 members, many of them World War II veterans who had performed in military bands before.

UT’s band became known as the Pride of the Southland Band in 1949, reportedly at the suggestion of Knoxville Journal columnist Ed Harris.

However, much of the modern Pride of the Southland Band evolved in the 1960s. W.J. Julian, a Navy combat veteran of World War II, had studied music at Northwestern University, near Chicago. Julian (1922-2015) took the job of band leader in 1961 and proceeded to make the Pride of the Southland Band what we know today, instituting the famous circle drill and the T. In 1972, he also introduced a rousing brass version of a recent country hit, “Rocky Top.”

According to the official UT history, To Foster Knowledge, Prof. Julian “produced a top-notch unit that could lay honest claim to its nickname.”

In 1965, at the inauguration of President Lyndon Johnson, Julian’s band began a tradition of marching in presidential inaugural parades. The Pride band performed in more consecutive inaugurals than any other civilian group, greeting eight presidents of both parties. However, in 2013 the inaugural committee opted to invite a Kingsport high-school band to represent Tennessee.

Next Friday’s presidential inauguration will be the marching band’s 13th inaugural parade.

Featured Image: Now boasting 330 members, and about 20 times bigger than some of its predecessors of the post-Civil War period, the Pride of the Southland Band has entertained football fans and marched in formation through much of American history, participating in 12—soon to be 13—presidential inaugurations.