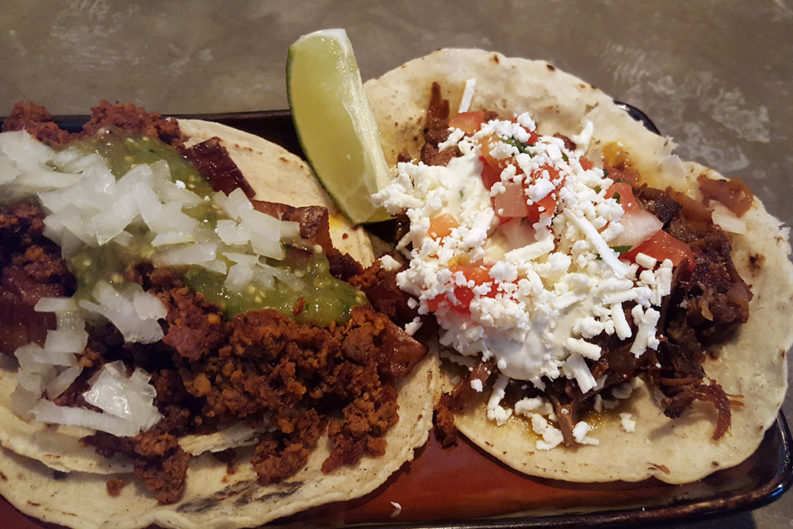 Although it sits along a happily modern Gay Street, there’s something about the approach to Chivo Taqueria that makes me feel like I’m riding into the Wild West. Maybe it’s because there are no attached or adjacent buildings that it recalls an isolated town in a Clint Eastwood film, perhaps Pale Rider, where hope and disappointment live in close proximity. Inside, although there are no spittoons, it’s easy to imagine that you’ve walked into a saloon where everyone is packing a couple of six-shooters and a few chips on their shoulders.

Regardless of my imagination, the image of the Old West fades as soon as the menu is in hand and you get used to the font. I’m sure that Clint or even John Wayne may have eaten a few tortillas in a Western or two, but I sincerely doubt if any were filled with beer-battered avocado.

The menu, as befits a taqueria, is concise and to the point: a few starters and sides, a fleeting nod to salads, and a compact selection of tacos with cute names. Despite my general suspicion of cute names, Chivo, like its brother Stock and Barrel, generally manages to deliver quality sufficiently serious enough to mitigate the silliness. And, admittedly, it’s fun to order a Clusterduck, and I’ll further admit that Frying Nemo has been on my mind many times.

The starters menu is a standard blend of queso, wings, guacamole, and chips with salsa. It’s nice to see queso fundido, but I was only really tempted by the presence of chicharrones—big ol’ pork skins liberally dressed with generous dollops of Valentina hot sauce. In addition to its bright flavor and very mild heat, the pools of sauce created nifty little pockets of chewiness in the midst of the crackle. The chicharrones are seemingly unsalted, but who cares—these are nice bites of good, rustic flavor. 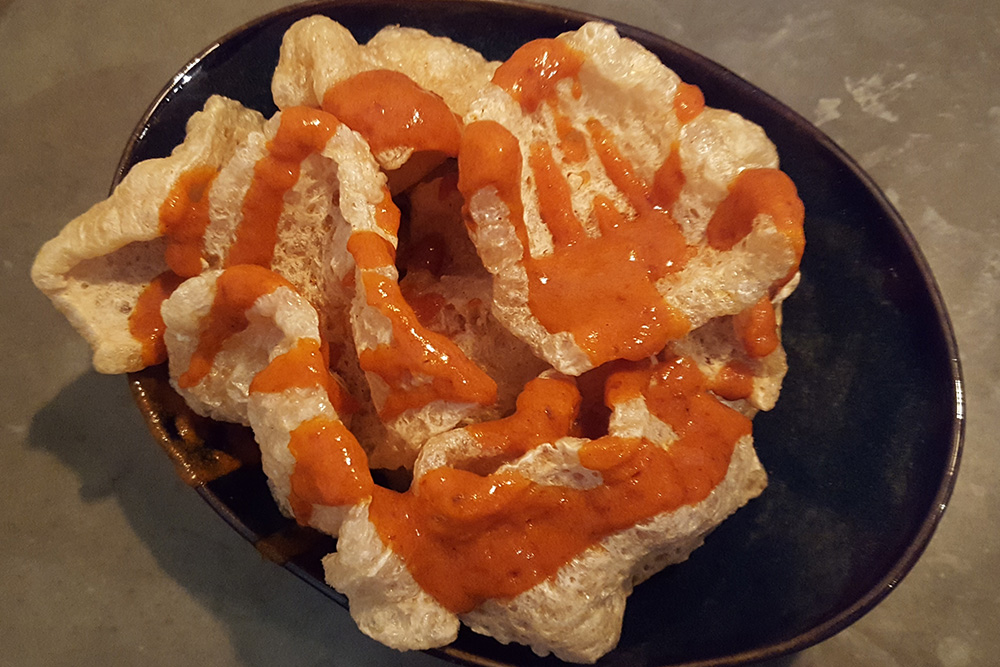 Lunch is a fine time to visit Chivo—the current special includes two tacos of your choice and a side for $9. It’s a filling lunch and an attractive one, too. The side choices include white beans with tomato and poblano; Brussels sprouts with olive oil, garlic, and ancho chile; and a dish of street corn. One of my dining partners liked the sprouts, which are served whole and often blackened, though the char, which I’m told is typical, was a little too bitter for me—I never quite tasted garlic or ancho or even much of the sprout save a few bites from the underdone heart.

The street corn is more successful, especially if you’re into the goop of the dish. It’s served off the cob and abundantly dressed with chile mayo and queso fresco, which lent it an almost casserole-like visage. I’ll have to own up to a bias here—I’ve never liked this dish when the corn is cut. Leaving it on the cob forces some restraint in the application of mayo, and my relationship with mayonnaise is tenuous at best.

As for the meat of the matter, the taco selection has some real winners. One is Mr. Panos, which combines wonderfully braised lamb, pico de gallo, tzatziki, and feta. Surprisingly, the pico de gallo made a fine complement to the other ingredients, which are tried and true—almost heavenly matches to lamb. Tender and juicy without being messy, it was a paragon of taco creativity and taste. 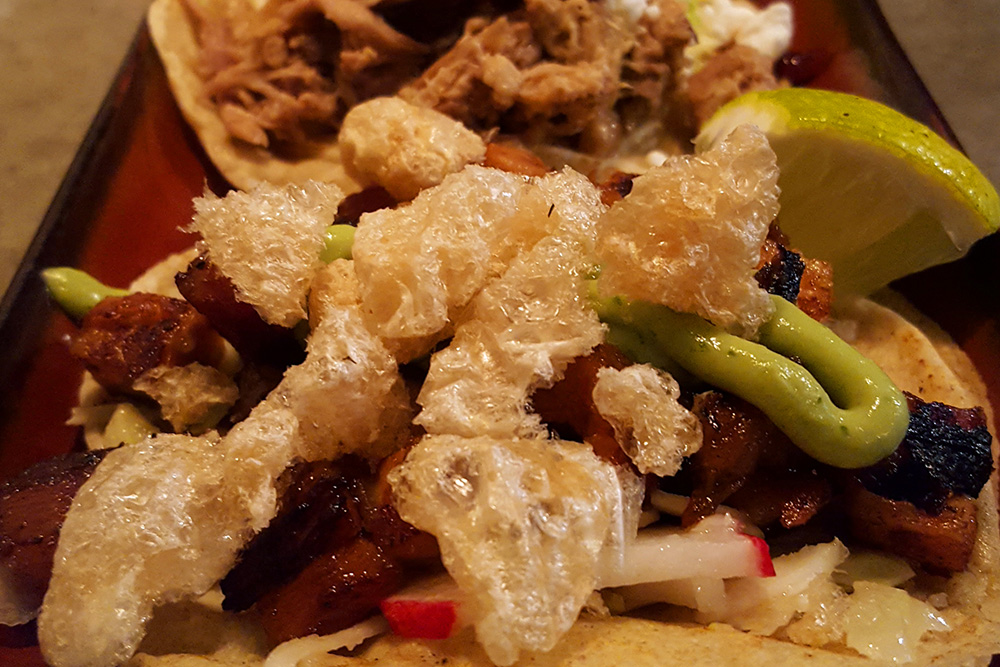 All of the tacos are well served by the house-made tortillas, which manage to accomplish that most respectable feat for edible food wrap: to be both tender and sturdy. In the case of Mr. Panos, just picking the taco up was a pleasure—it was full enough to be plump without exploding over the table, or me. And they’re tasty, too.

The Taters Gonna Tate was a little less manageable, but chorizo will act that way, I suppose. It’s a good choice for the meat-and-potatoes eater in your squad, but the mention of both potato confit and salsa verde gave me false hope of a more complex bite. As it was, there was plenty of chorizo flavor.

Texturally speaking, your best bet is to go Gangnam Style—and your taste buds may dance like Psy and his merry mallgoers, too. The magic here is that the pork belly is exceptionally well cooked and crispy about the edges, and supplemented by some little bits of chicharrones. When that combo meets up with silky avocado and a perky citrus slaw, it creates a nice harmony, in both texture and taste.

Right on its heels comes the No Meat? Guacward! I have no idea what that name means, but the bite to which it refers is a very sensible tidbit. The ethereally thin and crispy shell of fried batter around such a luxurious avocado interior creates a textural allure that almost defines hedonism. I’m a victim of its charms whenever it’s done well—and this was done quite well. Again, the house slaw lends a little more crunch and bright splash of acidity that brings additional character and balance—there’s a lot of action in this meatless wonder. 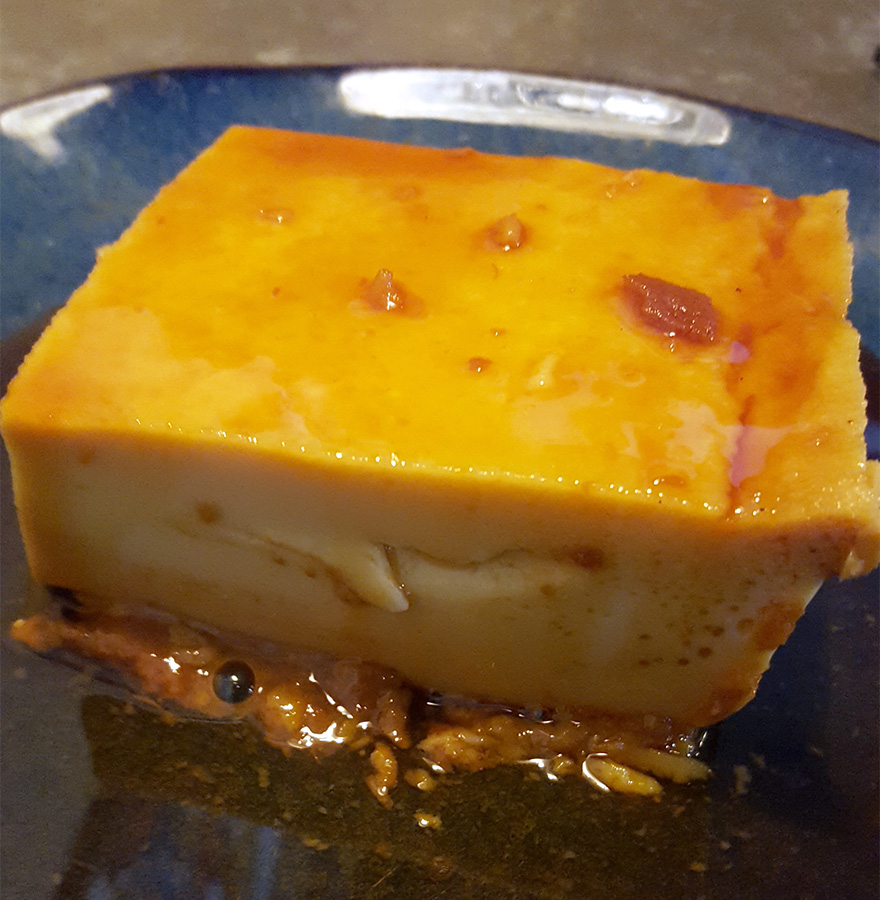 Dessert, flan and churros, fits the mold of the place, though Chivo’s flan is no delicate and wobbly little disk of custard—instead, it’s a big honkin’ slab sawed generously from a pan and drenched in a caramel sauce that was a bit overcooked, ergo bitter, on my visit. The description promised that the flan somehow included jasmine tea, which is partly why I ordered it, but, alas, it was a promise left undelivered. Still, if quantity is your aim, there’s plenty here to share. And the churros were crispy with a delicious dark chocolate sauce—though, in retrospect, I’d rather use those calories for another bite of fried avocado.

As for the rest of the tacos, they’re fine—everything is well cooked and enjoyable, if not always thrilling. Perhaps it’s too much to expect culinary epiphany in a simple bite from a place that offers more selections of tequila than actual food. Still, when there’s a duck taco on the menu, it’s hard not to let one’s expectations soar. But if you’ll place your food order after a few shots (of tequila—not your six-shooter), I imagine it’ll work out just fine.