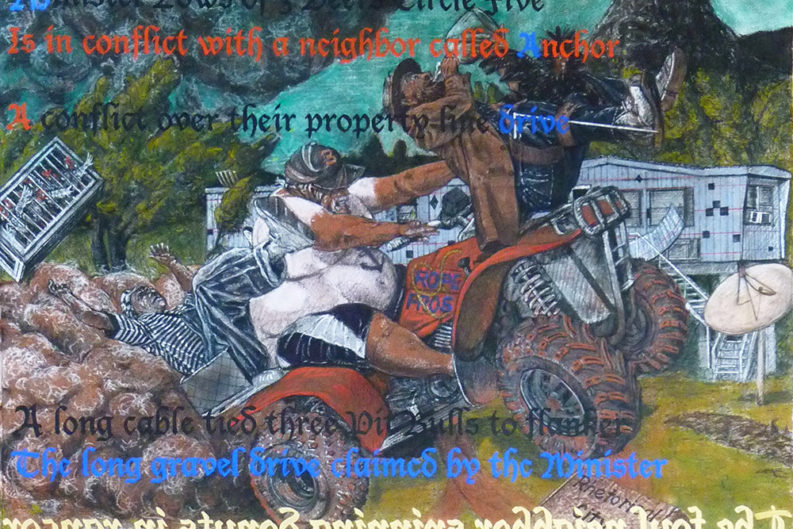 Both Gary Monroe and Timothy Massey descend from families who have lived in Appalachia for generations. The history and folklore of the area is bound to them and heavily informs their art, and both artists use drawing on paper as their primary medium. The intensely narrative work they produce, however, is on very different ends of the spectrum. Their work on view at the University of Tennessee’s Downtown Gallery comes from two long-term themed series: Massey’s Apocrypha seeks to find authenticity in common folklore, and Monroe’s Comedy Cocke County uses exaggerated local characters to dramatize the individual cantos of Dante’s Divine Comedy.

Massey, who teaches art at the College at Brockport, State University of New York, grew up a mile away from the French Broad River, near what is now Seven Islands State Birding Park. He observed local rural belief systems and wondered about the truth in them. If you buried a live bee, would it really rain the next day? How accurate is water dowsing? If a family member dies, what does it mean that you have to go outside immediately and whisper what happened to the bees? Would an orchard grove die if you didn’t? Fortified by his own experience and the advice documented in the Foxfire series of books, he went to find that place between science and faith. His Apocrypha series is based on the statements and phenomenon that rest between logic and faith.

Employing the skilled but minimalist drafting methods used by the American Regionalists of the early 20th century, he brings to life images of humans, dwellings, and the plant and animal life we depend on. He uses a combination of charcoal, India ink, Conte crayon, and gesso to create moody, monochromatic drawings that are rich in symbols. In “Sacrifice (Water Witch)”, a water dowser dressed in an old-time fedora holds a dowser stick in his mouth. A dying bee lies on the end of the stick, while a huge one that seems resurrected hovers overhead in gathering storm clouds superimposed behind a honeycomb grid.

“In Two Crow Lunch (Dowser)”, a dour man walks under his own rain cloud, holding his dowser stick up to the sky, as two crows hop near his feet. One crow is bad luck, two crows good, but the man continues to rain on himself, while the crows enjoy the luck of drinking from his puddles. In “Big Fish,” he addresses the greatest statements of dubious authenticity ever regularly declared: how big was the fish you caught. A man with a malicious grin stands in a field, his face lowered, as a child looks on. The man’s arms are outstretched as wide as they can go, while the ghostly image of a much smaller fish hovers over him in the foreground.

Massey also has several color drawings in the exhibit done with a mix of acrylic, color pencil, pastel, and gesso. The color adds an atmosphere of optimism to his narrative, even when the work contains heavy subject matter.

Examining Gary Monroe’s work is an adult version of a child’s fascination with pages from vintage Mad magazines. There is so much going on, and so many layers of wit. There is the main image and text, and then the story spirals around it. Strange things go on in the corners. Characters are creepy. Behavior gets delightfully crude. The theme in Comedy Cocke County, however, is decidedly high-brow. Monroe has taken individual cantos from Dante’s Divine Comedy and has them enacted by a cast of exaggerated stereotypes from Cocke County, reinforced by actual articles pulled from The Newport Plain Talk newspaper. On top of that, he taps into European art history and appropriates compositions and classic poses from other artists who have depicted the 14th century epic poem. The combinations of kitsch and esoteric delight Monroe. He likens it to Hee-Haw meets Dante.

The first drawings in the series are executed in black and white, with subsequent drawings in a combination of pencil, chalk, and pastel. Monroe had begun to feel that working in black and white was a crutch, and the color does make elements in the complicated drawings more descriptive, such as the repeated inclusion of old television sets playing the talking-horse sitcom Mister Ed in black and white. The depiction of the characters, while decidedly skilled, veers deliberately into caricature, in the tradition of William Hogarth.

All of the characters from the Divine Comedy are there, but their names have become anagrams. The text that scrolls across the body of each piece has been transcribed from Italian to English by Monroe. The French Broad River fills in for the river Styx, complete with billboards for moonshine and live bears. Elvis, Dale Earnhardt, and the infamous Del Rio cockfighting pit all take on significant roles.

The richness of the details and complexity of Massey and Monroe’s work demands a long and indulgent time break in your schedule to absorb.

Meandering Mythologies by Gary Monroe and Timothy Massey is on display at the Downtown Gallery (106 S. Gay St.) through Jan. 28. Admission is free.