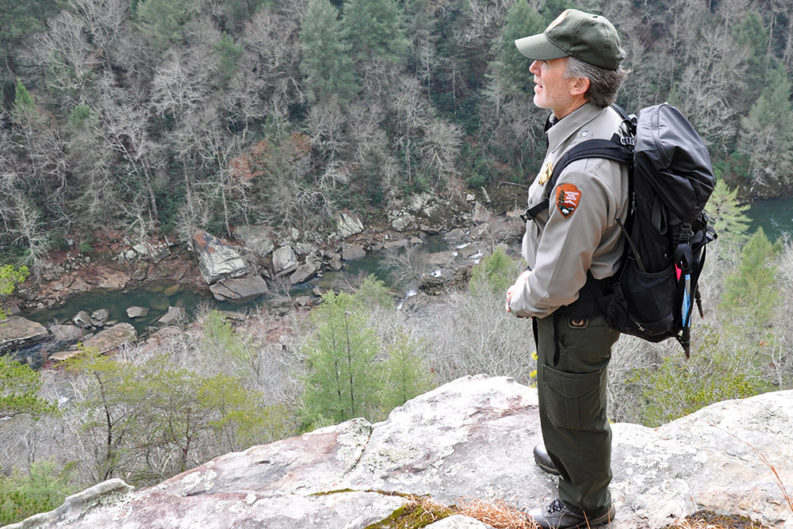 One of my most memorable trips into wilderness—a three-day float down the Green River through Dinosaur National Monument in Utah and Colorado—was nearly ruined by the guides who made us participate in community building activities and listen to bad poetry around otherwise excellent campfires.

I’m not a big fan of being guided through the wilderness. It’s not because I know so much or that I think I know so much about the outdoors. Mostly, I like having my own agenda, going at my own pace, reveling in silence, and finding my own way, even if it leads to an outbreak of chiggers, poison ivy, or bewilderment—as it has, more than once.

So it was with some trepidation that I attended an interpretive hike in the Obed Wild and Scenic River area. Ranger Rick Ryan, who leads a hike on the Obed every month, would take us on the Point Trail to some overlooks, an arch, and a section of a climbing wall called Tieranny Roofs. I knew Ryan from two other Obed events: Climb with a Ranger, also a monthly program, and Night Skies over the Obed, a gathering of star gazers.

I drove under a leaky sky from Maryville and wondered if I’d be the only one there, if I’d have Ryan to myself to interrogate the entire hike, for I had many questions. Dr. Drew Crain and I had been there twice looking for a legendary fishing spot off-trail. The first time we got lost, and we were found by chiggers. The second time, we found our fishing spot, but I nearly stepped on a copperhead and a mysterious jokester fish broke both our lines. 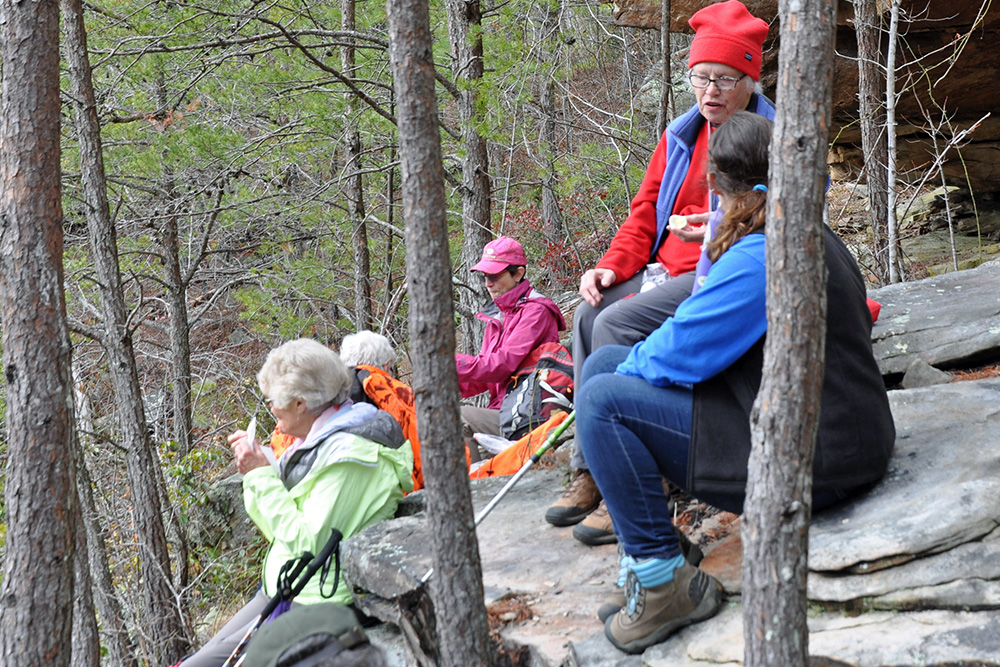 The author’s group stopped for lunch at a spot that overlooked the Obed River.

To my surprise, 12 other hikers joined me and Ranger Rick, along with Ranger Veronica Greear, and two interns at the Lilly Overlook parking area. People had come from Knoxville, Oak Ridge, Kingston, Loudon County, and Allardt, near Jamestown, to hike in the dimness of this day in celebration of the impending winter solstice. A man and his two young sons had come from nearby Coalfield. There were no dogs, but you could bring one, if you kept him on a leash.

The day got brighter as we hiked in a straggly line through the woods, descending to a creek with an elaborate wooden bridge and then climbing up a rocky defile to the top of a ridge.

One of the hikers, Ava Sears, from Allardt, pointed out a rash of pale mushrooms protruding from a fallen log. Sears didn’t know the scientific names, but she said she “knew the ones you could eat, the ones that would poison you, and the ones that made you see cartoon characters.”

Ryan would stop every half-mile or so and give us a short talk. He’d wait for the interns to bring up the rear with the slower-paced hikers and tell us what we were looking at or where he was taking us.

The park, he told us, was arc-shaped as it followed the Obed River. He would lead us to a couple of places where we could look down into the river gorge. We would also descend a “scramble” (if we wanted) to Tieranny Roofs.

“You get some of your best views on a day like this,” he said, “when the mist rolls into the gorge.”

At the first overlook, the flat rocks we walked on were layered with iridescent green reindeer moss, intricate antler-like patterns that reminded me of a coral reef. Ryan asked us to avoid stepping on it.

He pointed at Clear Creek, 100 feet below us, and across the gorge, where a section of the Cumberland Trail ran along the ridgeline to a place called the Devil’s Pulpit.

At a couple of other overlooks we stared down at the Obed River, a narrow stream that tumbled through rock gardens and slackened into deep water sections. Ryan said you could do a loop from the Cumberland Trail, cross the Obed, and join the point trail below the Obed Wall, just below us. Yes, he told me, it was permissible to hike off-trail in the Obed.

Ryan, an experienced rock climber, said the dropdown to the Tieranny Roofs was a “five-second scramble” for him. He and an intern spotted us as we picked our way down a narrow gap in the wall, turning around backward and using a knotted rope to descend a 15-foot long section of steep slippery rock.

Our destination took us along the base of the Obed Wall, a 2-mile-long section of sandstone with dozens of climbing routes. It hurt my neck and made me a little dizzy to trace the routes visually, the overhangs 100 feet or more above us. Periodically, you could see silver bolts for climbers to clip onto, and sometimes the rock was honeycombed with places you might wedge a foot or hand, but there were also smooth, blank, inscrutable expanses that looked impossible to scale.

The terminus of our hike was a large, flat boulder below Tieranny Roofs that Ryan said was ideal for lounging, with the river visible below through the trees, sending up a faint murmur, the wall looming above you, and the sun suffusing the rock surface with heat. He was surprised there were no climbers that day.

By the end of the hike, I’d learned a lot from Ryan and the other hikers. Though I’m prone to seek out solitude and flee human chatter in the wilderness, it’s instructive to see a beloved place through the eyes of others experiencing it for the first time and to hear from veterans like Ryan, who pass on knowledge that enriches one’s interaction with wilderness that deserves reverence and vigilant protection.

Ryan couldn’t tell me what broke my line and Dr. Crain’s that day, but he did know a spot where we might hook a razor-toothed prehistoric muskellunge. And one of the interns told me that mentholated body powder would ward off chiggers. Come summer, I can’t wait to test it. 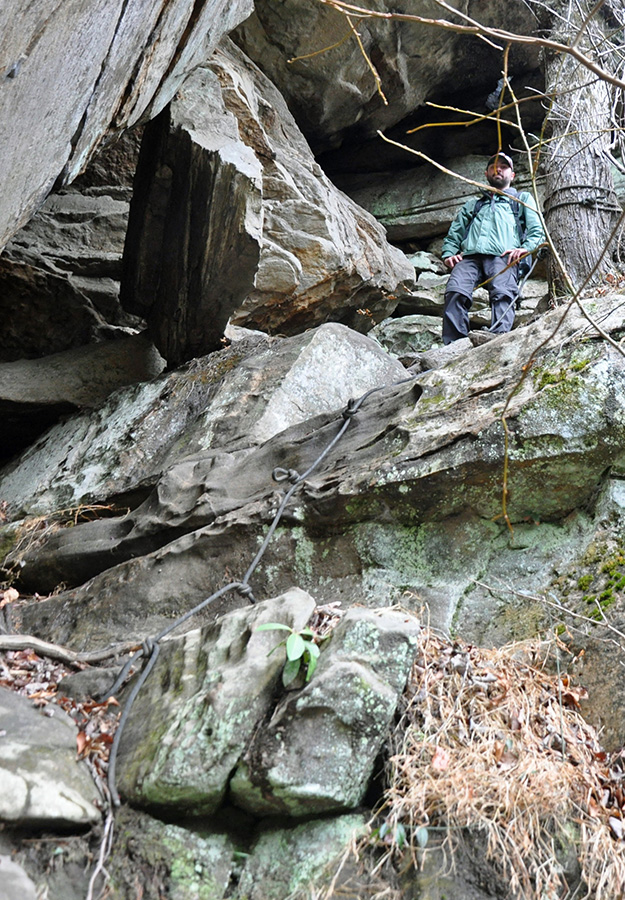 An intern helped hikers down the scramble from the trail above.