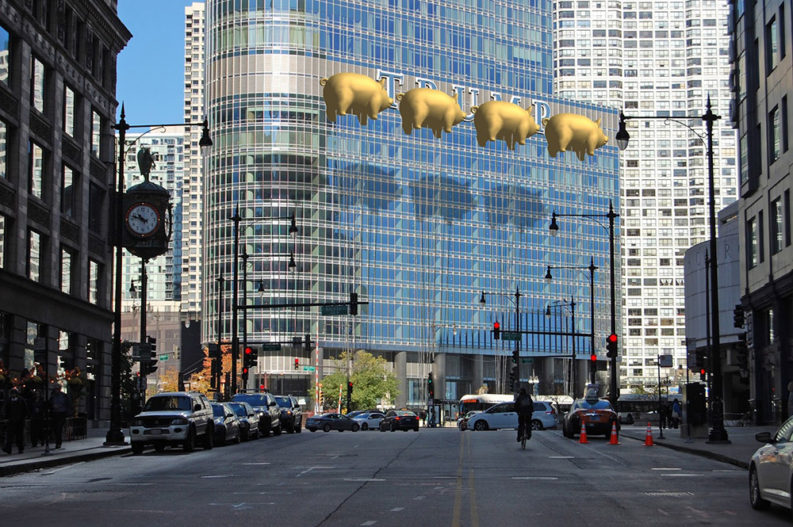 While campaigning, Donald J. Trump liked to broadcast Elton John’s “Rocket Man” and “Tiny Dancer,” much to the chagrin of Mr. John. For the 65,476,535 Americans who cast votes on Nov. 8 (48.1 percent and counting), David Byrne’s “Burning Down the House” was more apt. That said, on Jan. 20, 2017, Trump will be the first president since Thomas Jefferson with such close ties to the architectural world, albeit more as a collector than designer. But since this leader of the Alt-Right Elite is soon to become Leader of the Free World, it’s worth getting some sense of his past relation to architecture before he burns down any more houses.

The Italians have an expression for people like Mr. Trump—several of them actually. But the only one I can use in this venue is “Nato con una camicia.” The direct translation of which is “born with a shirt,” which essentially equates to being born with a silver spoon in one’s mouth. (Yet another trait he shares with Mr. Jefferson.) As Mr. Trump worked his way up from the top, he built a domain of perception—aka: a brand—based on an empire of building with other people’s money. You have to hand it to him; never has anyone achieved so much having done so little for so many for so long.

The results of the November 2016 election cycle demonstrated much to those interested in learning from such an unprecedented phenomenon. Chief among these lessons was the tone-deafness of America’s left-leaning leaders. More astounding still, many of the brightest political observers of our generation continue their hearing impaired commentaries, learning little from seismic events.

Writing in the wake of Italy’s failed referendum causing the resignation of Prime Minister Matteo Renzi, in his Dec. 5 New York Times column, Roger Cohen voices a claim made by many: “Democracies, it is clear, have not been delivering to the less privileged, who were disenfranchised or discarded in the swirl of technology’s advance.” Yet, like so much of liberal post-election self-flagellation, this is not only facile, it is also simply at odds with the facts. When such smart and level heads as Mr. Cohen get something so obviously wrong, one really begins to worry.

If we indeed live in a post-truth era, I choose to ignore it for the sake of argument. Facts and figures demonstrate that in the United States, the underprivileged have fared far better under the Obama administration than at any time since The Great Society, despite what the Republican-held House and Senate have tried to do to them. Over 13 million more have health insurance today than several years ago owing to the Affordable Care Act (Obamacare). Unemployment is at record lows, as are mortgage rates. But as Bill Murray’s character, Tripper, chants in Meatballs, “It just doesn’t matter.”

Calm and shrewd stewardship at the executive level pulled President Bush’s Reign of Error economy back from the brink. Meanwhile, House Republicans blithely passed 60 perfunctory bills to repeal all or part of Obamacare. During that same time, owing to unprecedented nominal legislative activity, the passing of resolutions to name U.S. post offices accounted for an average of 15 percent of all congressional productivity.

One area, sadly, where employment numbers are way down (and will stay so) is in coal mining, but this has nothing to do with imaginary illegal aliens or Secretary Clinton’s inexplicable choice of DSL over high-speed cable. It has been a trend since the end of the World War II and will continue, not because of globalization or new digital technologies, but because of longstanding lower demand and because strip mining and mountaintop removal have permanently replaced the subterranean coal miner.

What Mr. Cohen ought to have been talking about, therefore, was not the failure of liberal democracies to deliver to the underprivileged, but the perception of that failure. Managing the domain of perception is where Mr. Trump excels and the left has truly lost its way. And as everyone knows, perception always trumps reality, just as it trumped Mr. Cohen and convinced coal miners in places like Clay County, Ky. (America’s poorest county, which voted for Mr. Trump by as much as 90 percent) to shoot themselves in both feet by backing a candidate who will strip them of access to one of their most basic human rights: affordable medical care. But it seems that this, too, just doesn’t matter. 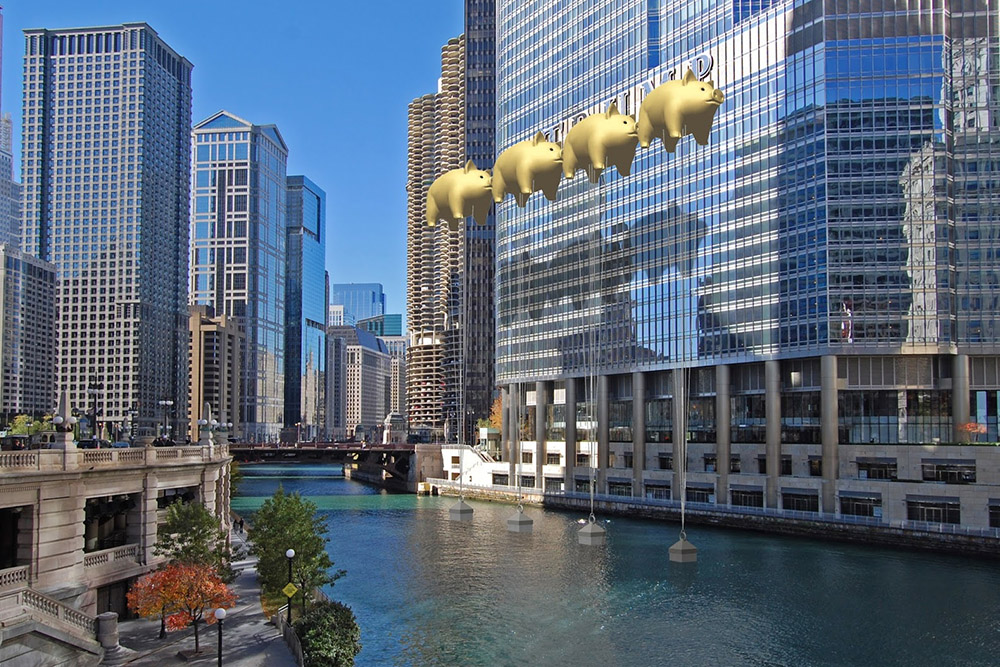 What does matter (to architects, at least) is that very little of what The Trump Organization (TTO) has built approaches the level of architecture, which is clear to anyone well versed in the topic. It is more accurate to think of his buildings as Depreciating Monetary Delivery Systems. Among the TTO-built exceptions are Arthur Erickson’s hotel in Vancouver, Canada, and Chicago’s Trump® Tower (2008) by Adrian Smith of SOM in Chicago (largely funded by George Soros, back when Mr. Trump was still a card-carrying Democrat). The other exceptions are all previously existing landmarks, which he marks with his brand, from discrete buildings to vineyards to endangered 4,000-year-old Scottish dunes.

The former Bank of Manhattan Trust Building at 40 Wall St. (1929-30) is an elegant Art Moderne/Art Deco tower that, until the Chrysler Building’s antenna was completed in 1931, was the tallest building in the world. It now goes by the poetic moniker, “The Trump® Building.” There must be several floors of New York’s Trump® Tower packed with round-the-clock staffers whose only job is to invent new names for Mr. Trump’s properties. As of this writing, excluding golf courses, there are no fewer than 25 major buildings branded Trump®.

The infamous MacLeod House & Lodge in Northeastern Scotland is the only one of his 15 resort hotels unbranded, and for good reason. If traveling anywhere near Balmedie, Scotland, it’s probably best to let the natives assume you’re from Toronto, Calgary, or Drumheller. The only thing the locals dislike more than Mr. Trump is comparing the Jacobite Rebellion to the British invasion of the Falklands. He promised to spend $1.5 billion, build a large hotel complex, and employ thousands; instead he destroyed “Scotland’s Amazon,” employed relatively few, spent 1/30th the sum promised, and gave them the one thing Scotland desperately needed: another golf course.

There is a perception in our country that to be wealthy is to have good taste; you would think much of what we see in places like Palm Beach, Las Vegas, and most upper-middle class suburbs would have long ago demonstrated the inverse. Similarly, Americans tend to believe that bigger is better; if any of the survivors of the Titanic were still around, they would tell a different story. Yet, we continue to get bigger and more tasteless buildings from the likes of Mr. Trump. During an interview while campaigning, he explained that what made one of his new building projects (that he is branding, not building) so much better than anything he had branded before was that instead of two towers, this one would have three. “It will be amazing!” It’s just this kind of razor-sharp reasoning that makes one curious about the acceptance rate at Penn’s Wharton School of Business back in the 1960s.

Mr. Trump’s “renovation” of Mar-a-Lago hints at what he may do to the White House—not with its power, but the building. It will certainly be the smallest of his homes. Have you seen the Drottningholm Palace or the Kremlin? The private family quarters on the second floor will certainly be cramped for a man with so many wives and multi-generational children. Additional levels of living space, a few new bathrooms here, a few bedrooms there, and closets—lots of closets. Not since Warren G. Harding has there been a president-elect entering his first term with more baggage in need of closets.

No doubt Mr. Trump sees its wealth of white classical detailing as mere substrate awaiting gold leaf. The Blue Room (restored by Jackie Kennedy) could use a few more colors, and the East Room (home to state dinners and the venue for awarding the Presidential Medal of Freedom) could profit from a few water features and a retinue of gilded putti.

Already on the drawing boards no doubt are the Trump® White House Penthouses, which—after a proper amortization vigil—could easily be flipped into condos. Who knows, the White House could actually turn a profit. So many air rights, so little time. The Clinton administration’s Lincoln Bedroom kerfuffle seems quaint.

Not long after the election, many high-profile critics of Mr. Trump radically realigned their positions for personal gain. So, too, did entire industrial sectors, along with professional advocacy groups such as the American Institute of Architects, the latter demonstrating as an institution what Philip Johnson said of himself, quoted in a 1977 New Yorker interview: “Whoever commissions buildings buys me…. I’m for sale. I’m a whore.” Mr. Johnson was responsible for re-skinning the former Gulf and Western Building (1969) in Manhattan for Mr. Trump shortly after Trump acquired it in 1994. The architecture critic of The New York Times at the time characterized the results as “a 1950s International Style glass skyscraper in a 1980s gold lamé party dress….”

I’ve known several non-whore architects in my life, many of whom practice here in Knoxville. As for the self-proclaimed whore and leading figure in the American Nazi party throughout much of the 1930s, Mr. Johnson’s aphorism does a disservice to sex-industry workers. That the president-elect continues to pimp the Trump® brand even during the transition ought to surprise no one. It just doesn’t matter. After all, unlike Jefferson, at least Mr. Trump hasn’t slept with any of his slaves. But who knows, perhaps those tax returns will reveal more than we think. There may yet be a Sally Hemings in one of his many closets, which could go a long way to explaining his purchase of a vineyard in Albemarle, Va.

In the meantime I vote for David Byrne to perform “Road to Nowhere” at the inauguration. I suspect Elton John would prefer it to belting out “Goodbye Yellow Brick Road.” 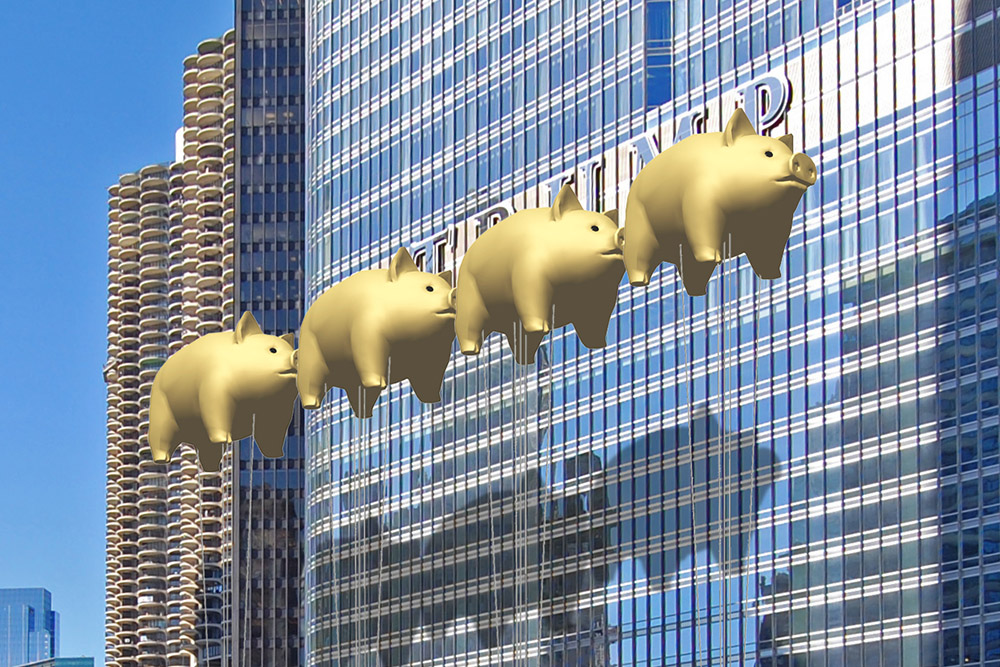