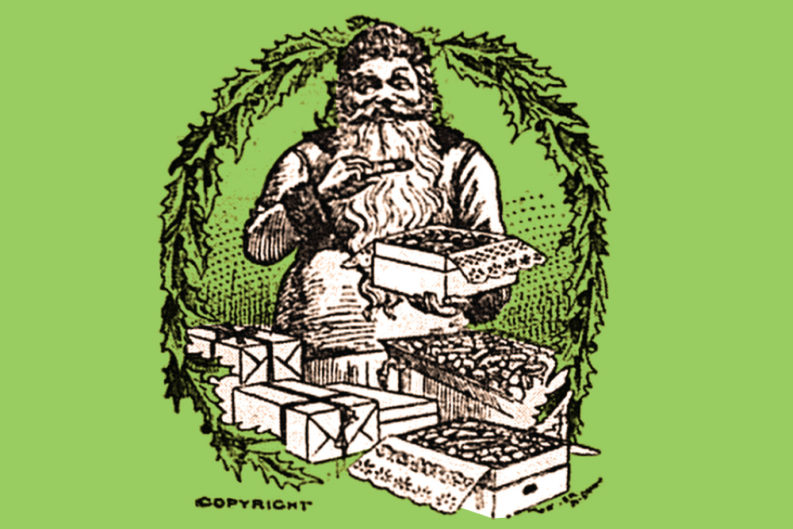 The Christmas holiday has a fascinating history in Knoxville.

For the city’s first half-century, any mention of Christmas in newspapers or letters is rare. Early Americans considered it an Old World holiday. Local celebrations began around 1844, fueled two influences: Charles Dickens’ extremely popular novella, A Christmas Carol, and the arrival of European immigrants, especially from Germany, Switzerland, and Ireland, who brought their own holiday traditions.

By the late 1800s, Christmas was a major public holiday here, and Dec. 25 was a day for church services, dances, vaudeville comedies, costume parties, and even bowling tournaments! Thousands came downtown for Christmas Day, and some stores remained open during the morning.

Knoxville’s strangest Christmas was Dec. 23-25, 1893, a sometimes terrifying week later remembered as the Saturnalia. During an unseasonably warm season, mobs of drunken men and boys wreaked havoc across downtown, setting off fireworks, some of which started fires. A bank building was partly blown apart by dynamite in the Christmas festivities. Policemen were called in to quell the riots, and some were injured. The Christmas “Saturnalia” of 1893 led to the city’s first strict anti-fireworks policies.

Each week, this page highlights relevant but little-known aspects of Knoxville’s history. Over the last 21 months, we’ve examined the little-known histories of Emancipation Day, the Knoxville Zoo, public running events, our Asian-immigrant community, local music festivals, and the founding of the city itself. We research each page afresh, relying on the substantial resources of the Knox County Public Library, especially the Calvin M. McClung Historical Collection.

It’s a weekly production of the Knoxville History Project, an educational 501(c)(3) nonprofit guided by a board of scholars and community leaders. Each weekly page is compiled and written for all ages, with an intent to broaden Knoxville’s knowledge of itself.

The first organization devoted specifically to promoting the history and culture of the city of Knoxville, the KHP sponsors talks, tours, and research projects concerning Knoxville history for various groups, including schools. Last year, KHP helped launch the Knoxville Mercury, which has already won regional and even national awards for the quality of its work.

The Knoxville History Project purchases this page from the Knoxville Mercury to promote Knoxville’s history, and our investment in turn also helps the Mercury itself.

We need your help. Our contract with the Mercury is soon coming up for renewal, and we’d like to make this page a permanent weekly feature, exploring all aspects of the history of our hometown for an all-ages audience.

The Knoxville History Project has just launched its permanent website, knoxvillehistoryproject.org. Past KHP History Pages are there to review, as well as photographs, upcoming historical events, and other features. In months to come, it will feature much more.

Please let us know if you want to earmark your donation for the History Page campaign.