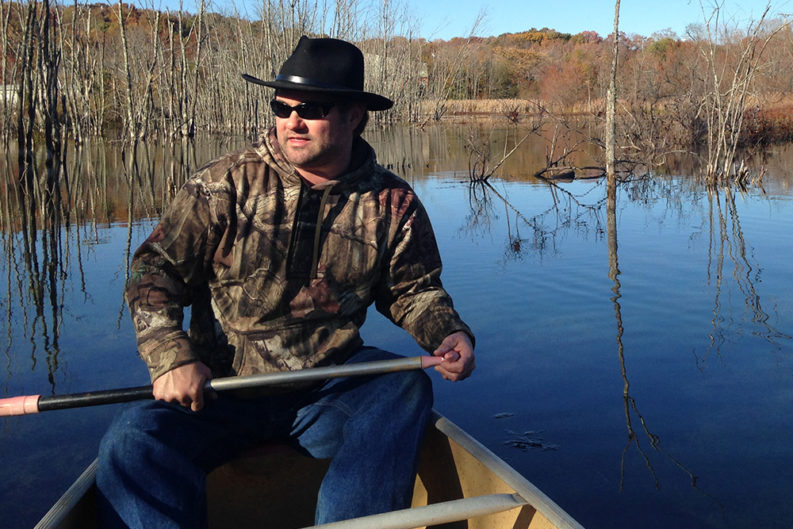 The morning after election day, I took a field trip to a unique wild area in the heart of developed West Knoxville. My guide, City Council member and conservationist Mark Campen, met me in a McDonald’s parking lot. America had elected a climate-change denier and opponent of environmental regulation, but Campen seemed optimistic. Keeping up a cheerful commentary on the nature and history of the area, he navigated a few blocks of harrowing traffic in his 1988 4Runner to arrive at a complex of warehouses and empty parking lots.

As we rounded the corner of an old spring house, the expanse of the blue pool opened up before us. In the clear water near the shore an otter popped his head above the surface, looked at us, somersaulted with a splash and swam away. We watched him break the surface once more in the distance, then he was gone.

He had suspected the presence of otters—this was his first time seeing one here in the flesh. A few weeks later we canoed across the water and examined a burrow underneath a large, flat rock, the surface of which was filthy with scat full of fish bones and scales. Beyond a thin line of trees lay the fast-food restaurants and gas stations of Lovell Road.

Campen has acquired 7 acres of this wetland for a rock-bottom price. As part of the Blue Spring headwaters, the land cannot be developed. For Campen, the value of the wetland lies not in its commercial exploitability, but in its vital role in the ecosystem as a tributary of Turkey Creek and home to a diversity of wildlife. Through binoculars we watched red-bellied woodpeckers perch on the trunks of dead trees. Flocks of cedar waxwings twittered overhead while a blue heron stalked through the reeds.

This small wetland area is the first step in Campen’s ambitious vision for a half-mile wildlife corridor and walking trail extending along Turkey Creek from Blue Spring to the Turkey Creek Wetland Park behind the Tennova Medical Center on Parkside Drive.

The land along Turkey Creek is held by a patchwork of public and private interests. A city greenway crosses the creek near the McDonald’s. Upstream, Harley Davidson of Knoxville has built a bandshell on piers extending into the floodplain. The 58-acre Turkey Creek Wetland Park extends south of Parkside Drive nearly to Kingston Pike.

“Getting the easements and trails established will be a challenge, but I believe it can be done,” Campen says.

Campen, who represents the 5th District in North Knoxville, has a degree in wildlife and fisheries, and a minor in forestry. He’s long had an interest in the health of Turkey Creek as executive director of Tennessee Izaak Walton League, a conservationist nonprofit that managed land for organizations including Turkey Creek Land Partners, the group of developers and investors responsible for the largest commercial development in Knoxville. 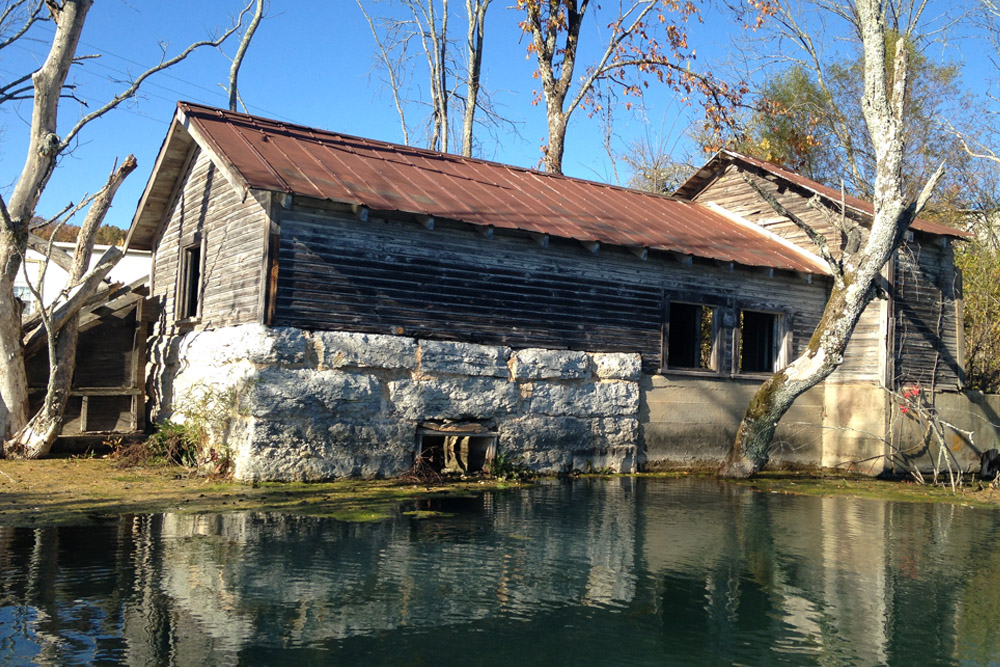 The historic spring house at Blue Spring, a headwater of Turkey Creek.

Some may remember the controversy surrounding the Turkey Creek development, constructed throughout the early 2000s, with environmentalists raising concern over the ecological damage of a 400-acre complex of big-box retail, restaurants, and parking lots built on undeveloped land. The developers agreed to mitigate the effects of the development by creating a 58-acre wetland park “to ensure it continues to supply critical flood control, improve water quality, provide habitat for a variety of wildlife and recreational opportunities,” according to a brochure for the Turkey Creek Wetland Park. Last year, the Tennessee chapter of the Izaak Walton League dissolved and Campen formed his own company, Conservation Cooperative, which continues to work with the Turkey Creek Land Partners to monitor and reduce pollution in the park.

As recently as the early 2000s, the wetland we navigated by boat was dry forest and farmland, with a man-made channel diverting the Blue Spring water to Turkey Creek. Beavers took over the abandoned farm and created the body of water supporting our canoe. Now a dam of mud sprouting silky dogwood saplings holds back the seeping spring. Campen tells me the wetland around Turkey Creek is larger now than before the development due to the flooding of this land. We circled the beaver lodge in the boat. Fresh tracks ran from the top of the mound of mud and sticks into the water. The pool was so clear, we could see the underwater entrances. A furry head disappeared behind the mound and did not resurface. Campen touched his oar to the outside of the lodge.

“They are in there right now!” Campen says. “This is so cool.”

A kingfisher dove and came up with a fish in its peak. Wood ducks, coots, and mallards flopped squawking into the air, startled by the canoe. A small turtle circled under the oar and a large mouth bass patrolled the depths. The loading dock of a freight company lay mere feet from the water, the gravel pad extending to the reeds. The young wetlands are wild and full of life, with white branches of drowned trees rising from the water.